Add an Event
Newswire
Calendar
Features
Home
Donate
From the Open-Publishing Calendar
From the Open-Publishing Newswire
Indybay Feature
Publish to Newswire
Add an Event
Related Categories: International | Anti-War
Intifada, Iraqi Style: Naomi Klein and Andrew Stern report from Baghdad
by Andrew Stern / Naomi Klein (expectresistance [at] yahoo.com)
Friday Apr 9th, 2004 7:07 AM
April 9, 2003 was the day Baghdad fell to U.S. forces. One year later, it is rising up against them.

**Free usage for the Indymedia network. All others please contact me for permission to use these photos in web or print. 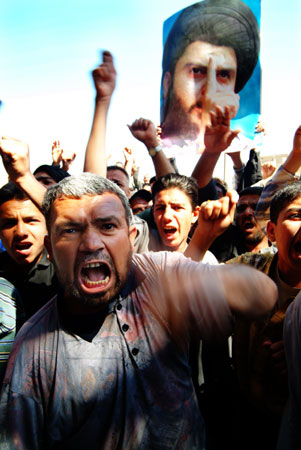 Donald Rumsfeld claims that the resistance is just a few “thugs, gangs and terrorists.” This is dangerous, wishful thinking. The war against the
occupation is now being fought out in the open, by regular people defending their homes and neighbourhoods - an Iraqi intifada.

“They stole our playground,” an eight-year-old boy in Sadr City told me this week, pointing at six tanks parked in a soccer field, next to a rusty jungle gym. The field is a precious bit of green in an area of Baghdad that is otherwise a swamp of raw sewage and uncollected garbage.

Sadr City has seen little of Iraq's multi-billion-dollar “reconstruction,”
which is partly why Muqtader Sadr and his Mahadi army have so much support here. Before U.S. occupation chief Paul Bremer provoked Sadr into an armed conflict by shutting down his newspaper and arresting and killing his deputies, the Mahadi army was not fighting coalition forces, it was doing their job for them.


After all, in the year it has controlled Baghdad, the Coalition Provisional
Authority still hasn’t managed to get the traffic lights working or to
provide the most basic security for civilians. So in Sadr City, Sadr's
so-called “outlaw militia” can be seen engaged in such subversive activities as directing traffic and guarding factories from looters. In a way, the Mahadi army is as much Bremer’s creation as it al Sadr’s: it was Bremer who created Iraq's security vacuum -- Sadr simply filled it.


But as the June 30 “handover” to Iraqi control approaches, Bremer now sees Sadr and the Mahadi as a threat that must be taken out - along with the communities that have grown to depend on them. Which is why stolen
playgrounds were only the start of what I saw in Sadr City this week. At Al Thawra Hospital, I met Raad Daier, a 36-year-old ambulance driver with a bullet in his lower abdomen, one of 12 shots fired at his ambulance from a U.S. Humvee. According to hospital officials, at the time of the attack, he was carrying six people injured by U.S. forces, including a pregnant woman who had been shot in the stomach and lost her child.

I saw charred cars that dozens of eye-witnesses said had been hit by U.S.missiles, and confirmed with local hospitals that their drivers had beenburned alive. I also visited Block 37 of the Sadr City's Chuadir District, a row of houses where the every door was riddled with holes. Resident said U.S. tanks rolled down their street firing into their homes. Five people were killed, including Murtada Muhammad, age 4.


And yesterday I saw something that I feared more than any of this: a copy of the Koran with a bullet hole through it. It was lying in the ruins of what was Sadr's headquarters in Sadr City. A few hours earlier, witnesses say that two U.S. tanks broke down the walls of the center while two guided missiles pierced its roof, leaving giant craters in the floor and missile debris behind.

The worst damage, however, was done by hand. The clerics at the Sadr office say that U.S. soldiers entered the building and crudely shredded photographs of the Grand Ayatollah Ali Sistani, the top Shiite cleric in Iraq. When I arrived at the destroyed center, the floor was covered in torn religious texts, including several copies of the Koran that been ripped and shot through with bullets. And it did not escape the notice of the Shiites here that hours earlier, U.S. soldiers had bombed a Sunni mosque in Fallouja.

For months the White House has been making ominous predictions of a civil war breaking out between the majority Shiites, who believe it's their turn to rule Iraq, and the minority Sunnis, who want to hold on to the privileges they amassed under Hussein's regime. But this week the opposite appears to have taken place. Both Sunni and Shiite have seen their neighbourhoods attacked and their religious sites desecrated. Up against a shared enemy, they are beginning to bury ancient rivalries and join forces against the occupation. Instead of a civil war, they are on the verge of building a common front.

You could see it at the mosques in Sadr City on Thursday: thousands of
Shiites lined up to donate blood, destined for Sunnis hurt in the attacks in
Fallouja. “We should thank Paul Bremer,” Salih Ali told me. “He has finally
united Iraq. Against him.” 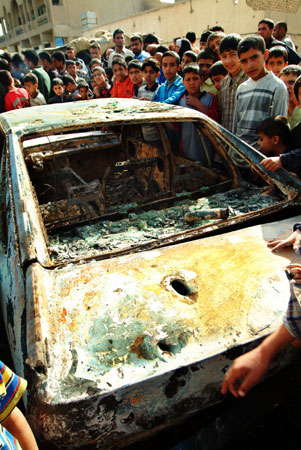 A car whose driver was burned alive after being hit by a US missile in Sad'r City. Baghdad, Iraq. April 7, 2004.
http://www.andrewstern.net
§Little girl
by Andrew Stern / Naomi Klein (expectresistance [at] yahoo.com) Friday Apr 9th, 2004 7:07 AM 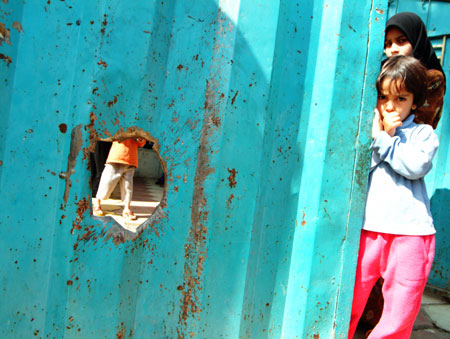 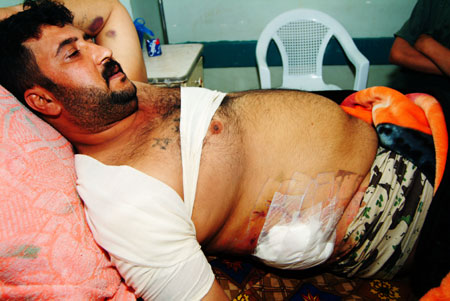 Raad Daier, who was hit by a bullet when a US Humvee opened fire on him while driving his ambulance. He was carrying 6 people injured by US forces in Sad'r City. Baghdad, Iraq. April 7, 2004.
http://www.andrewstern.net
§Body
by Andrew Stern / Naomi Klein (expectresistance [at] yahoo.com) Friday Apr 9th, 2004 7:07 AM 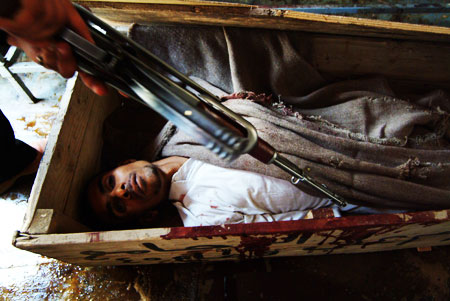 A man killed the night before during clashes with US troops in Sad'r City. Baghdad, Iraq. April 7, 2004.
http://www.andrewstern.net
§Funeral procession
by Andrew Stern / Naomi Klein (expectresistance [at] yahoo.com) Friday Apr 9th, 2004 7:07 AM 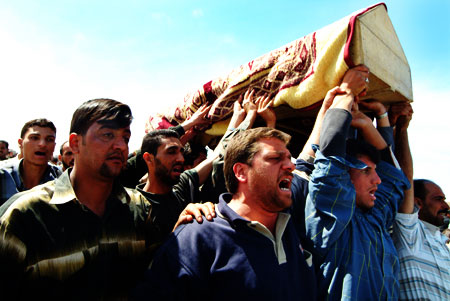 Mourners carry a coffin of a family member killed the night before when US forces attacked the Moqtadah Al-Sad'r offices in Shia neighborhood of Shualla. Baghdad, Iraq. April 6, 2004.
http://www.andrewstern.net
§Koran shot
by Andrew Stern / Naomi Klein (expectresistance [at] yahoo.com) Friday Apr 9th, 2004 7:07 AM 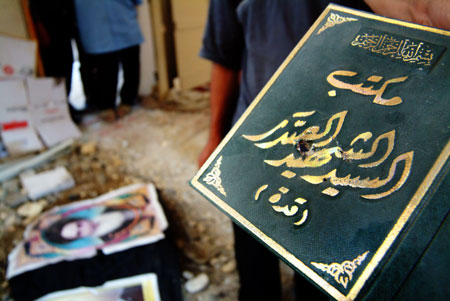 A copy of the Koran shot by US troops in the destroyed Muqtadah Al-Sad'r offices in Sad'r City. Baghdad, Iraq. April 4, 2004.
http://www.andrewstern.net
§Guided missile
by Andrew Stern / Naomi Klein (expectresistance [at] yahoo.com) Friday Apr 9th, 2004 7:07 AM 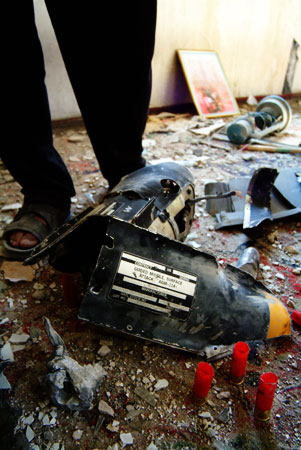 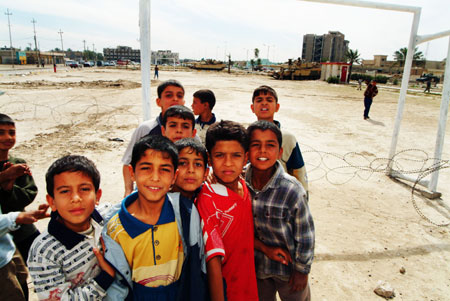 Children on their playground in Sad'r City, which has been occupied by tanks, and had coils of barbed wire run across it. Baghdad, Iraq. April 6, 2004.
http://www.andrewstern.net
§Directing traffic
by Andrew Stern / Naomi Klein (expectresistance [at] yahoo.com) Friday Apr 9th, 2004 7:07 AM 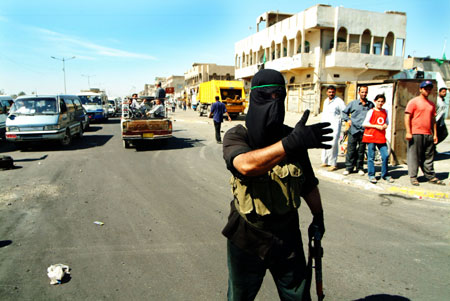 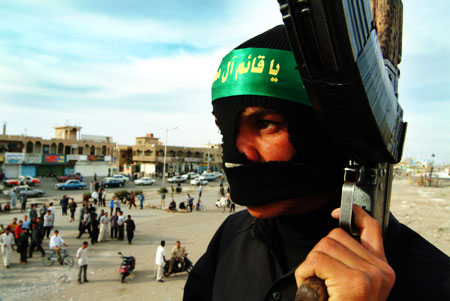 A member of the Mahadi Army stands guard on the roof of the Moqtadah Al-Sad'r offices in Sad'r City. Baghdad, Iraq. April 6, 2004.
http://www.andrewstern.net
Add Your Comments
LATEST COMMENTS ABOUT THIS ARTICLE
Listed below are the latest comments about this post.
These comments are submitted anonymously by website visitors.