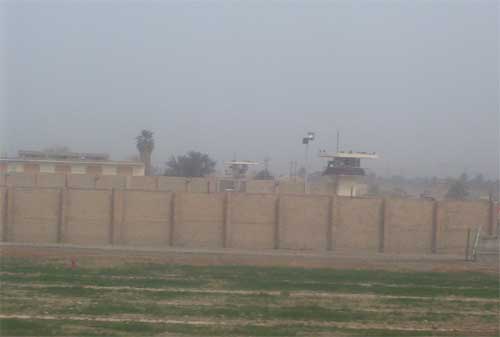 Abu Gharib was a huge prison were Saddam tortured and killed thousands of prisoners. He released all of the prisoners shortly before the US invasion. The US soon took over the prison and began to fill it up. It is believed that the US holds up to 14,000 prisoners-- Iraqis who have been arrested since the occupation. For most of those held, there is very little evidence against them, and it is incredibly hard to find out any information. The prison is overcrowded and most prisoners are living in tents. No visitors are allowed and no communication is allowed in or out. No photos are allowed of the prison. Every day, hundreds of relatives of those detained line up outside, hoping for the release of their family members, or at least some news.

These photos were taken out of a bus window.
§Long wall and guard towers surround the prison
by tristan (trismegatus [at] hotmail.com) Thursday Mar 4th, 2004 3:52 PM

§Family members hoping for information about those inside
by tristan (trismegatus [at] hotmail.com) Thursday Mar 4th, 2004 3:52 PM 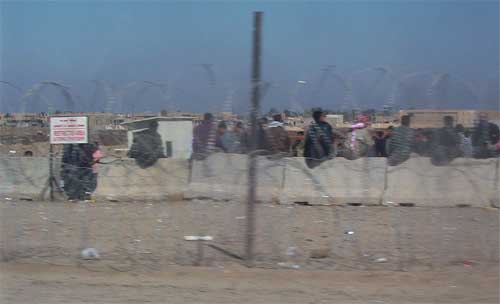 §Family members hoping for information about those inside
by tristan (trismegatus [at] hotmail.com) Thursday Mar 4th, 2004 3:52 PM 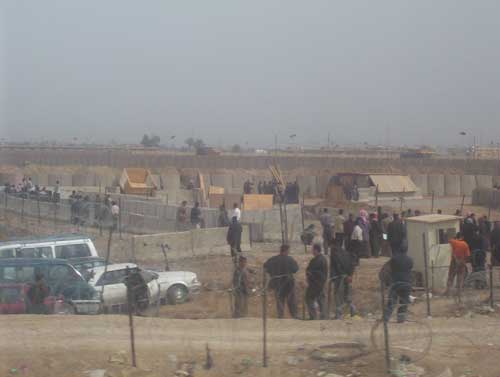 §new reports on what went on inside the Abu Ghraib prison
by links Saturday May 1st, 2004 8:57 AM
see

http://www.indybay.org/news/2004/04/1679030.php
Add Your Comments
LATEST COMMENTS ABOUT THIS ARTICLE
Listed below are the latest comments about this post.
These comments are submitted anonymously by website visitors.