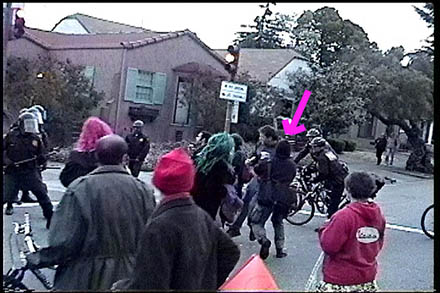 Due to technical difficulties, full video is not being posted.

These images show fairly well that a demonstrator was
pushed into the police line by someone clad in black, with a
hoodie and mask, who then walked *through* the police
line and up the stairs to hide on someone's front steps
behind a tree.

The arrest occurred just as another arrest was executed.
Some felt the first arrest -- which appeared to be orchestrated as
if to look like police lines were attacked -- was a
distraction in order to execute the second arrest.

When one videographer tried to position himself to
get an image of the hiding saboteur, police charged him.

When people demanded to know who the saboteur was, and even
demanded that he be arrested (citizen's arrest, which the
police have the duty to execute), he left the steps and walked offthrough
many more police officers.

Many thought this was clearly a police set-up.
That may not be the case, but there is little question
that the saboteur was working with police, and
probably was a police officer. 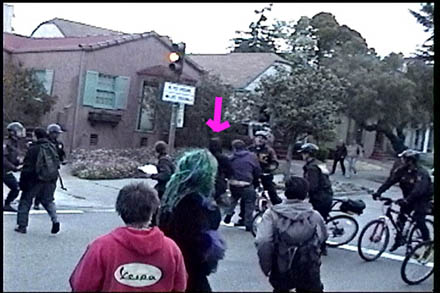 While these frame captures don't show the distance the demonstrator
was dragged, you should be able to tell that the police
saboteur (pink arrow pointing to his head) has the
demonstrator in a compliance hold and is shoving him
into the police line.
http://www.festivalsofresistance.net/
§...and the bad guy walked away...
by billi klopt
Wednesday May 1st, 2002 4:32 AM 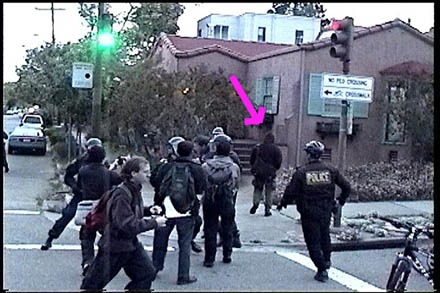 The remarkable thing is how quickly the saboteur, after
slamming the demonstrator into the police line, put his
arms at his side and walked through the line as if nothing
had happened. Were people not watching carefully he
could have just blended into the scenery as planned.
http://xinet.com/rts/
§gee how can we have that kind of immunity?
by Outraged
Wednesday May 1st, 2002 4:35 AM 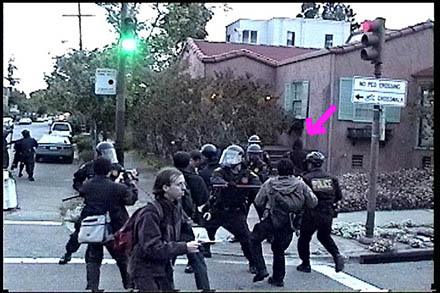 Of interest, police clubbed witnesses while letting that
oh so scary "black block" saboteur just walk away...lending
yet more credence to the notion that he was an undercover
cop executing a dirty operation.

http://www.festivalsofresistance.net/
§demonstrator down, black blocker outatown
by so neat and tidy
Wednesday May 1st, 2002 4:39 AM 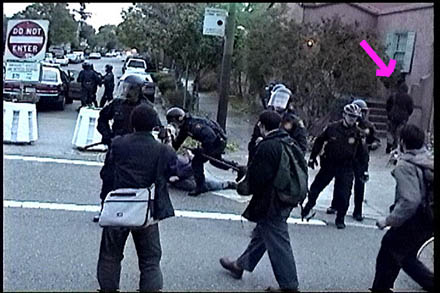 Sorry the video couldn't be posted, it says a whole lot
more about what was going on.
http://xinet.com/rts/
Add Your Comments
LATEST COMMENTS ABOUT THIS ARTICLE
Listed below are the latest comments about this post.
These comments are submitted anonymously by website visitors.