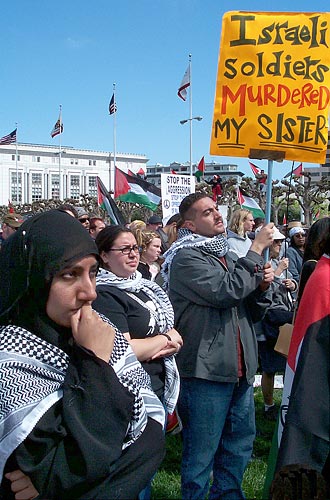 San Francisco - "My name is Eyad Latif. I'm a freshman at Cal majoring in Middle Eastern studies. My parents and three little sisters moved back to the West Bank two years ago. Last year, when my mom was eight months pregnant, she was on her way to the hospital in an ambulance. Three Israeli soldiers stopped her at a checkpoint outside of Ramallah and wouldn't let her pass. She went into labor at the checkpoint and the three Israeli soldiers sat there and watched my mom almost bleed to death and then watched my baby sister die in her arms."

Eyad was one of 35,000 demonstrators who marched from Dolores Park to the San Francisco Civic Center in protest of the many gross human rights violations committed by the Israeli Army against Palestinians. (David Hanks/Global Exchange - Saturday 20 April 2002)
http://www.globalexchange.org
Add Your Comments
LATEST COMMENTS ABOUT THIS ARTICLE
Listed below are the latest comments about this post.
These comments are submitted anonymously by website visitors.