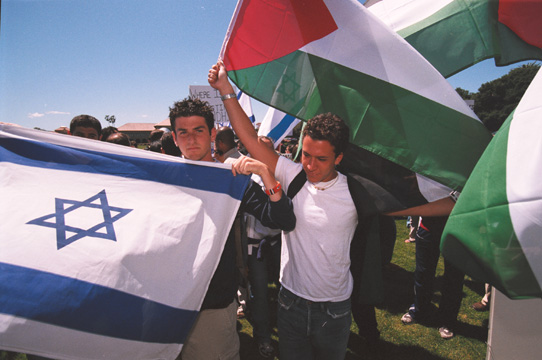 The oval at the end of Palm Drive at Stanford University was the location for a demonstration at noon on Friday, April 19 in solidarity with the Palestinian struggle. About one hundred fifty demonstrators attended, as did over two hundred counter-demonstrators in solidarity with Israel. Stanford officials insisted the two demonstrations take place on opposite sides of a path. Towards the end of the event Rabbi Michael Lerner spoke criticizing the Israeli regime. He also criticized the Palestinian Authority for the use of violence without negotiation. Many counter-demonstrators booed Lerner before he spoke. But after a while, elements in the counter-demonstration began to applaud the rabbi. A short while later, as the event came to a close, someone spoke on the mike asking the demonstrators on both sides not to replicate the conflict, but to join and sing together for peace. The two demonstrations then merged and Israeli and Palestinian flags flew side by side. In the photo are two Stanford dorm mates, Jared Cohen (on left) and Tarek Hammam (on right). They were on opposite sides of the demonstrations until they found each other afterwards and waved their flags together.
Add Your Comments
LATEST COMMENTS ABOUT THIS ARTICLE
Listed below are the latest comments about this post.
These comments are submitted anonymously by website visitors.