Add an Event
Newswire
Calendar
Features
Home
Donate
From the Open-Publishing Calendar
From the Open-Publishing Newswire
Indybay Feature
Related Categories: Palestine
How can people celebrate ethnic cleansing?
by blahh
Wednesday Apr 17th, 2002 4:46 PM
On April 17th 2002, UC Berkeley students gathered to celebrate Israeli Independence Day. While celebrations in Israeli itself this year were grim due to the increasing brutality of the war, Berkeley students were on the whole upbeat about the mass killings. While many signs said that "Israel wants Peace" it was clear by the anti-Palestinian rhetoric(calling Palestinians terrorists and praising Sharon’s actions) that this Peace would be that of an apartheid state over a conquered people. 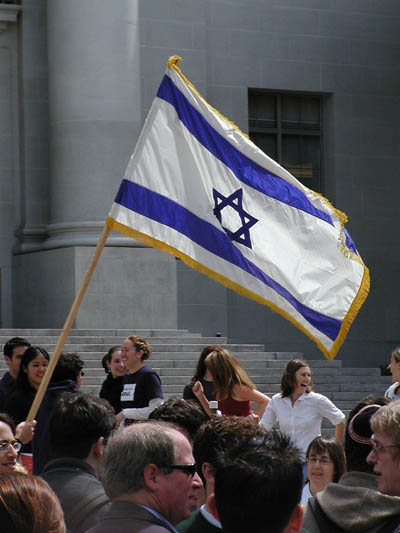 Whatever one thinks about the events of 1948 and 1949, the death and destruction are hardly things that should be celebrated.

"As a consequence of the fighting in Palestine/Israel between 1947 and 1949, over 700,000 Palestinian Arabs became refugees"

"One Israeli military intelligence document indicates that at least 75 percent of the refugees left due to Zionist or Israeli military actions, psychological campaigns aimed at frightening Arabs into leaving, and direct expulsions. Only about 5 percent left on orders from Arab authorities. There are several well-documented cases of mass expulsions during and after the military operations of 1948-49 and massacres and atrocities that led to large-scale Arab flight. The best-known instance of mass expulsion is that of the 50,000 Arabs of the towns of Lydda and Ramle. The most infamous atrocity occurred at Deir Yasin, a village near Jerusalem, where estimates of the number of Arab residents killed in cold blood by Israeli fighters range from about 125 to over 250.
"

Here is a map of Palestinan refugees worldwide from :
http://mondediplo.com/maps/refugeesdiasporapaldpl2000

Here is a map of Palestinain refugees in the Middle East:
http://mondediplo.com/maps/refugeespalestiniandpl2000
§Acknowledgement of mass transfers
by blah
Wednesday Apr 17th, 2002 4:59 PM 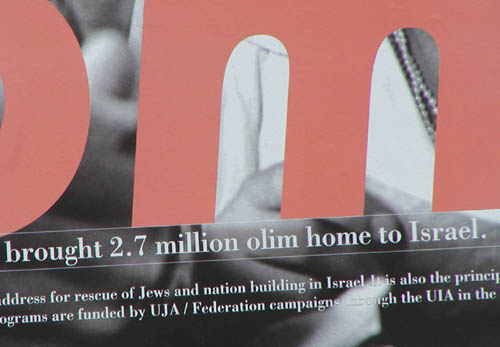 While taking in refugees is usually a good thing, Israel's policy of taking in anyone who is Jewish is intended more as a way to guarantee a Jewish majority than to protect immigrants. The shear number of those being brought into Israel is a number the proIsraeli crowd celebrates but in any other country it would be seen as a form of ethnic cleansing (since its making up for a local population that was pushed out). It would be in many was comparable to apartheid South Africa having come up with a policy to take in millions of white immigrants to guarantee white rule.
§Selling Palestinian food and making fun of their fight for a Free Palestine
by blah
Wednesday Apr 17th, 2002 5:02 PM 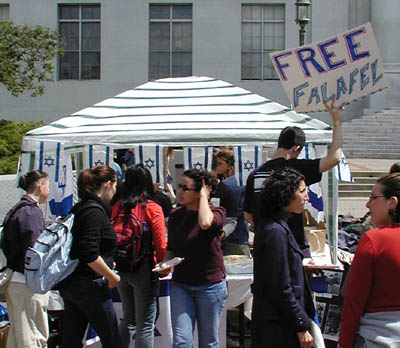 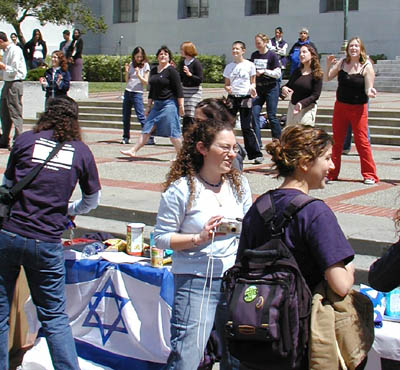 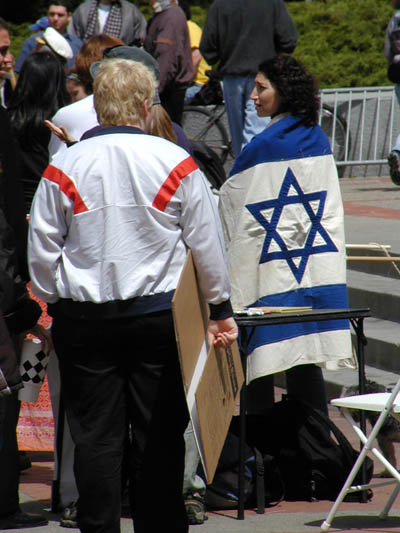 After 9/11 the American people were told by the media that flying American flags was a way to show mourning for the deaths in New York. Quickly it became apparent that this was not the case and the patriotism was used to rally support for carpet bombing of Afghan civilians. ProIsrael groups in the US are doing the same with the Israeli flag. Flying the Israeli flag has nothing to do with being Jewish and opposing antisemitism and has everything to do with making Palestinians in the US feel unwelcome. For a Palestinian, seeing an Israeli flag on a US campus is a hate crime every bit as painful as it would be for a Jewish student to be forced to see others rallying with Nazi flags.
Add Your Comments
LATEST COMMENTS ABOUT THIS ARTICLE
Listed below are the latest comments about this post.
These comments are submitted anonymously by website visitors.