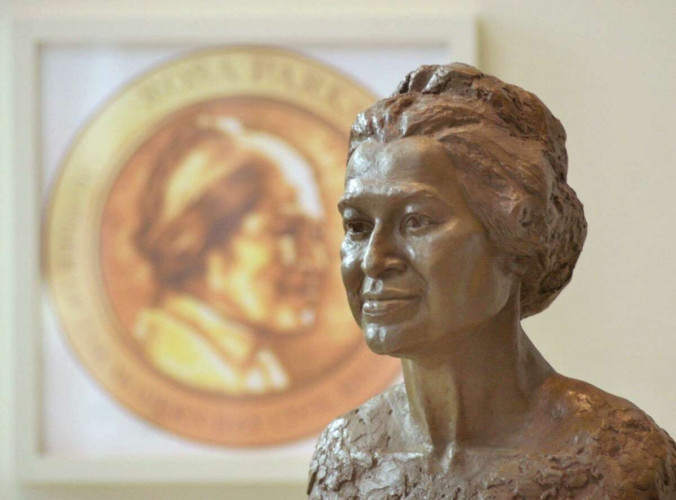 Rosa Parks was born in a terrible time of flagrant racial prejudice and legal discrimination in the Capitol City of the "Heart of Dixie" the blood-stained red clay of Alabama.

From the sacred red clay soil of "Ancient West Florida” Rosa was born in a special place of great destiny, Tuskegee, Alabama and later moved to Montgomery, Alabama to place her mark upon the world stage.

The State of Alabama was admitted to the United States of America after a second round of fighting off British colonization forces in 1812 and settling long established Spanish claims to the Port of Mobile Bay.

When the State of Alabama was established, it was legal to enslave people of African descent and use indigenous forced agriculture labor to enhance the development of newly arrived European migrants to the southern region of America, including German, Irish, Scottish and other immigrants that enslaved many throughout the "Black Belt" of Alabama, including the McCauley family.

After the U.S. Civil War in 1865 and changes to the U.S. Constitution with ratification of the 13th amendment, legal slavery in America was replaced by “Jim Crow laws” throughout the South continuing the challenge and quest for equity and equal opportunity.

Segregation laws prevented people of African descent from equity and equal opportunity in the post US Civil War, day to day living, especially in public education and public accommodations.

Nationwide, people of African descent could not live in the same neighborhoods, use the same drinking fountains, attend public schools or even sit in the front section of buses.

“Whites Only” signs were posted in restaurants and store windows throughout the nation and many demonic forces degraded people of African descent as less than second class citizens.

On December 1, 1955, a seasoned Rosa Parks boarded her usual bus after a long day at a department store where she worked as a seamstress.

Like most days, she had to pay the bus fare, get off the bus and go to the back door to the colored seating section, while whites boarded and sat in the front.

On that special day, at rush hour, many people boarded the bus and the bus driver decided to move the sign for the white section demanding black passengers to give up their seats to white passengers.

James Blake, the white European bus driver, demanded the black passengers get out of their seats and stand in the back of the bus.

3 black passengers got up and moved, yet Rosa decided she'd had enough bullying from Blake and was tired of the unfair rules in the transportation system, and would not move.

Rosa refused to give up her seat so a white European man could sit down... this act of courage and life of sacrifice changed the course of his story, forever.

Rosa Parks was convicted on December 4 because of her criminal behavior disobeying the legal system of the day… community leaders gathered to plan what to do about the incident led by the Montgomery Women's Political Council.

They decided that on December 5, nobody would ride the bus; instead, they walked and used carpools. The boycott continued and nearly everyone stayed off the bus for 381 days.

Today, that collective action is known worldwide as the Montgomery Boycott.

Yet, few are aware that this occurred in the heart of the original capitol of the Confederate States of America, “the Heart of Dixie” the crimson tide was changed forever.

During the 1955 and 1956 Christmas holiday seasons; considerable economic, emotional and physical hardship was endured by people of African descent who were routinely harassed and experienced escalated terrorist violence as the adverse economic impact of over 40,000 unified and determined residents of Montgomery challenged the status quo throughout the region and shook the nation who were closely watching the news, daily.

Collective community sacrifice was extremely successful and U.S. Transportation laws began to change reflecting a positive new beginning for Civil Rights and other Human Rights for people of African descent throughout America and the world.

For another half a century, Rosa Parks continued to be a champion for human rights.

For the next 50 years of her life, Rosa Parks worked with many groups and organizations including in the City of Detroit and the Office of U.S. Congressman John Conyers.

Her tireless works with Coretta Scott King for over 20 years helped to establish the National Holiday for Dr. Martin Luther King, Jr.

Rosa Louise McCauley Parks began her transition into the spirit world, on October 24, 2005, and her body laid in state in the U.S. Rotunda, Washington, D.C. the first woman to be given this honor.

Today, many continue to keep her growing legacy alive celebrating Rosa Parks Day, as many work towards erecting a statue of her in the Statuary Hall of the U.S. Capitol.

As the new documentary, "The Rebellious Life of Rosa Parks" is shown, many more will discover your contributions to the forward flow of humanity, far beyond one evening, refusing to give in, on the bus on the way home from a long day at work.
Added to the calendar on Sun, Jan 22, 2023 1:29PM
Add Your Comments
Support Independent Media
We are 100% volunteer and depend on your participation to sustain our efforts!