by Lynda Carson (newzland2 [at] gmail.com)
Lydia Gans Photo Of A San Rafael Tenant Meeting In 2005 That I Helped To Organize With Housing Activist Marion Brady, To Help Save Section 8 Tenants From Losing Their Housing Vouchers. That's Me Standing Near The Back Of The Room In A Red Top And Black Sweater Reading Some Information That I Helped Pass Out To The Tenants: 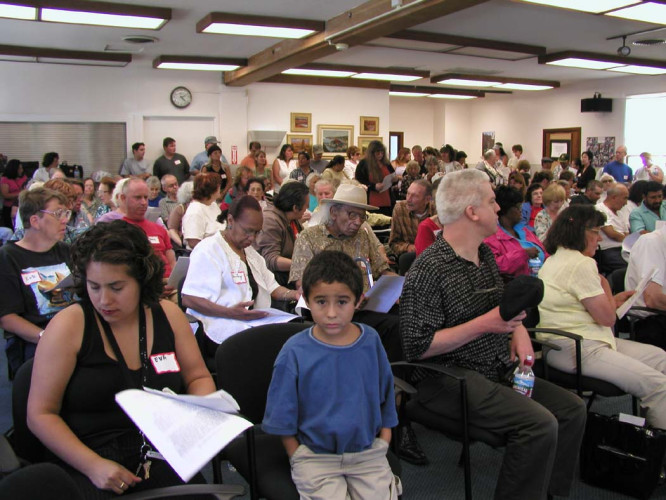 Oakland - Activists, and the National Low-Income Housing Coalition, are currently urging HUD’s subsidized housing tenants to contact their representatives in an effort to fight back against an $8.1 billion proposed budget cut to HUD and it’s subsidized housing programs, that’s part of a federal funding decrease of around $130 billion being extorted by the Speaker of the House, Kevin McCarthy, Republicans, and the far right-wing extremist members of the Freedom Caucus.

That’s right! It’s deja-vu all over again, in regards to the threat of massive budget cuts to Alameda’s HUD subsidized tenants, that may result in many Section 8 tenants a.k.a. housing choice voucher tenants losing their subsidized housing in the City of Alameda again. Including subsidized renters in Oakland, or subsidized tenants in Marin County, and other various locations in the Bay Area.

As this battle heats up, I miss the help of activist Michael Diehl who passed away a few years ago, and his efforts in fighting back against the latest proposed budget cuts to HUD’s subsidized housing programs.

Meanwhile, the Oakland Housing Authority (OHA) has opened its public housing waiting list for those who may be interested in getting on the long waiting list. According to the OHA, pre-applications will be accepted Tuesday, January 17, 2023 8:00 AM through Tuesday, January 31, 2023 4:00PM. Click here for more information http://www.oakha.org/Pages/default.aspx .

Earlier today, as a result of Congressional Republicans and the fascist extreme right-wing election denier members of the Freedom Caucus, holding the federal government hostage while trying to extort massive budget cuts from Social Security, Medicare, HUD’s subsidized housing programs and other much needed federal domestic programs in return for voting to raise the debt limit, “extraordinary measures” were taken today by U.S. Secretary of the Treasury Janet L. Yellen to keep the federal government running.

On behalf of the GOP fascists and extreme right-wing members of the Freedom Caucus, Speaker of the House, Kevin McCarthy has agreed to tie lifting the debt ceiling to massive budget cuts, which worries advocates that massive budget cuts are looming in the near future if the Democrats are dumb enough to make a deal to collaborate with the extreme right-wing members of the Freedom Caucus.

At this point, the White House has indicated that it is not willing to negotiate with those in Congress who are trying to extort massive budget cuts from the federal government in return for raising the debt ceiling. But what does that really mean?

U.S. Secretary of the Treasury Janet L. Yellen, sent an urgent letter today to all members of the Congressional leadership regarding the debt limit crisis that is occurring.

In part in her letter to Congressional leaders, U.S. Secretary of the Treasury Janet L. Yellen wrote, “I write to keep you apprised of actions the Treasury Department is taking in regard to the debt limit.  In my letter of January 13, 2023, I noted that Public Law 117-73 increased the statutory debt limit to a level of $31.381 trillion, and informed you that beginning on January 19, the outstanding debt of the United States was projected to reach the statutory limit.  This letter serves to notify you, pursuant to 5 U.S.C. § 8348(l)(2), of the extraordinary measures Treasury began using today.

Additionally, she wrote, “As I stated in my January 13 letter, the period of time that extraordinary measures may last is subject to considerable uncertainty, including the challenges of forecasting the payments and receipts of the U.S. Government months into the future.  I respectfully urge Congress to act promptly to protect the full faith and credit of the United States.”

In other words, the Secretary of the Treasury, Janet Yellen, is claiming that she is not certain how long the “extraordinary measures” she has taken today will keep the federal government running, despite the “debt issuance suspension period” that also began on Thursday, January 19, 2023, which is expected to last (maybe) through Monday, June 5, 2023.”

In a release today from the National Committee to Preserve Social Security and Medicare, in part it states, “Congressional Republicans are playing with fire by risking a government default on its financial obligations — an outcome that is more likely as the U.S. reached its legal borrowing limit today.  A default would hit the nation’s seniors especially hard, as the payment of Social Security, Medicare, and Medicaid benefits would be jeopardized.  This could be devastating for the 65 million older Americans on Social Security and the 63 million beneficiaries of Medicare.

Absent the legal authority to borrow beyond the current debt ceiling, Social Security, Medicare, Medicaid, and other payments may not be made on time and in full unless Congress approves an increase in the debt limit.  Even a short delay in the payment of Social Security benefits would be a burden for the millions of Americans who rely on their earned benefits to pay for out-of-pocket health care expenses, food, rent and utilities. In fact, almost two-thirds of beneficiaries depend on Social Security for half of their income and 40 percent rely on their benefits for 90 percent or more of their income.”


Tax Cuts For The Rich And Over Bloated Military Budget:

Indeed, we are faced with the madness of the on-going Trump tax cuts for the rich that occurred a few years ago, and the recent over bloated military budget that gave $100 billion to Ukraine for military expenditures, as the fascist extremist right-wing Republicans and Freedom Caucus are extorting massive budget cuts to the federal government's domestic programs, including Social Security, Medicare, and HUD’s subsidized housing programs.

Meanwhile, as millions of people are being placed at risk of homelessness because of the looming budget cuts to the federal government, Collier Gwin, the wealthy crazy art gallery owner in San Francisco was arrested last night for recently brutally spraying cold water on a poor homeless person living in the cold, on the cold hearted streets of San Francisco, as the local media tries to blame the poor homeless person for the brutal inhumane actions of Collier Gwin that finally resulted in his ultimate arrest for abusing the poor homeless woman.

>>>>>>>>
>>>>>>>>
Add Your Comments
Support Independent Media
We are 100% volunteer and depend on your participation to sustain our efforts!