by Hank Greenberg
On November 19th, Californians paid $5.30 per gallon of gasoline, while Texans paid $3.02. Stopping this price gouging with a windfall profit cap has become a priority of the governor. If Gov. Newsom can pass a windfall profits cap, it will be viewed as a major victory over the California oil industry. California Governor Gavin Newsom’s official plan to combat these high prices was introduced by State Senator Nancy Skinner, on the day the legislature reconvened to swear in members, December 5, 2022. 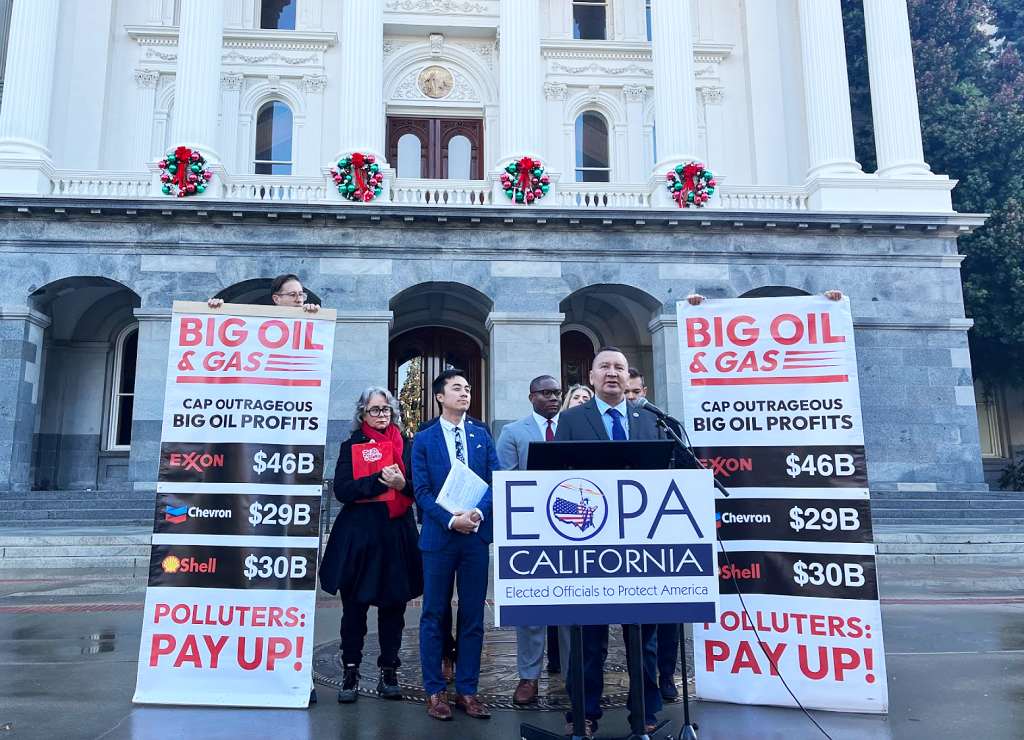 California Governor Gavin Newsom’s official plan to combat these high prices was introduced by State Senator Nancy Skinner, on the day the legislature reconvened to swear in members, December 5, 2022.

Since September Gov. Newsom haspublicly supported a windfall profits cap on oil companies for price gouging consumers, famously saying they are, “fleecing Californians.” -. Gov. Newsom has not specifically indicated how  severe the penalty should be.

“They are making billions and billions of dollars of excess profit,” said Gov. Newsom. “I believe in capitalism, free enterprise. I embrace it, but I don’t believe in greed.”

Jamie Court, who is the President of the nonprofit lobbying group Consumer Watchdog, said his research backs up the Governor’s proposal. Court believes the gasoline market is anti-competitive and that the lack of regulation has led to extraordinarily high prices.

In 2022, the five largest oil refineries in California made over 97 percent of the state’s gasoline. These oil refiners are Chevron, Marathon/Tesco, Phillips 66, Valero, and PBF Energy. All five of these corporate giants had record profits in 2022.

Court discussed a historical trend where high corporate profits led to high prices at the pump for consumers.

“The reason why our gas prices went up so high is because the oil refiners’ profits went up so high,” said Court. “Usually, when you have price spikes in gasoline, it can be tied with profit spikes. This year was no exception.”

Court explained that a penalty on oil refiners would force the record profits to go back into the pockets of consumers.

The proposed penalties are popular among Californians.

“Support is very high,” said Court. “In our poll from October, we found that 63 percent of Californians supported the windfall profits tax on oil refiners.”

Court believes the proposal will pass in the California state legislature.

“It’s not a tax. It’s a penalty,” explained Court. “It is a majority vote bill. This will make it easier to pass the California legislature.”

On December 5th, Gov. Newsom was adamant that the windfall profits penalty on oil refineries had to pass.

“We need to make sure this never happens in the future,” Gov. Newsom told the press. “And to the extent it does happen again, we are making sure that the people will be getting their money back.”

With the budget just proposed the bill is expected to be reviewed in committee at the end of January. Action is expected shortly after.

California is the nation’s sixth highest oil producing state. California’s oil refineries operate in cities that are known for premature death rates, lung disease, and asthma. The adverse health effects are largely due to the pollution the oil industry pumps into the atmosphere.

Many of the residents in these environmental justice communities have never taken a breath of clean air. Yet for decades the oil companies have not been held responsible. Now, these disadvantaged communities are being forced to pay exorbanate rates for gas, just to commute to work.

There have been bills before in the legislature to curb the oil industry’s power, but most have failed without the backing of a governor.

If Gov. Newsom can pass a windfall profits cap, it will be viewed as a major victory over the California oil industry.

END_OF_DOCUMENT_TOKEN_TO_BE_REPLACED
Add Your Comments
Support Independent Media
We are 100% volunteer and depend on your participation to sustain our efforts!