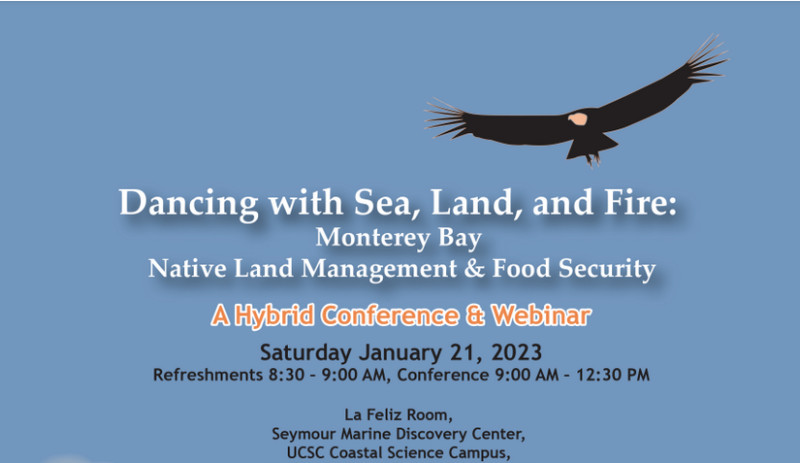 We are excited to share with you a hybrid in-person being held at the Seymour Marine Discovery Center in Santa Cruz, and also online via Zoom.

This conference summarizes the last 10 years’ eco-archaeological research in collaboration with the Amah Mutsun Tribal Band (AMTB), the researchers including members of the AMTB and Amah Mutsun Land Trust.

The focus will be on food plants and animals, and the evidence for management of the land
and sea shore by Native people

1. Alec Apodaca is a Ph.D. student at UC Berkeley and received his B.A. at UC Santa Cruz and M.A. at UC Berkeley. He conducted an award-winning senior thesis under Dr. Tsim Schneider (UC Santa Cruz) on the archaeology of indigenous shellfishing practices in Tomales Bay. Before joining the graduate program at UC Berkeley, he worked on the central coast as an Environmental Planner for the California Department of Transportation and has over five years of experience in Cultural Resource Management. His dissertation research focused on shellfish use by central coastal Native ancestors. His research interests center on historical fire ecology, coastal landscape management, foodways, and ecological restoration.

2. Rob Q. Cuthrell has worked with the Amah Mutsun Tribal Band for over a decade to conduct research on the long-term history of indigenous land and resource stewardship. Rob's research integrates archaeology and historical ecology to explore how Native people used prescribed burning to maintain open and productive landscapes on the Central California Coast. Rob received his PhD in Anthropology from UC Berkeley.

3. Rick Flores is a Horticulturist and Steward of the Amah Mutsun Relearning Program (AMRP) at the UC Santa Cruz Arboretum. He has worked at the Arboretum for over 20 years and holds both a B.A. and M.A. in Environmental Studies from UC Santa Cruz. His specialization is California native plants, but he currently works in other gardens as well, helping to maintain displays of extraordinary plants. As Steward of the AMRP, Rick fosters the relationship between the Amah Mutsun Tribal Band and the Arboretum, oversees educational programming, and helps develop displays of culturally important native plants. Rick also assists with fundraising and grant writing. Rick enjoys hiking, backpacking, fishing, mountain biking, bird watching, and just generally being outdoors, in addition to spending time with family and friends.

4. Diane Gifford-Gonzalez is Distinguished Research Professor of Anthropology and former Curator of the Monterey Bay Archaeology Archives at the University of California, Santa Cruz. Her specialization is zooarchaeology, and she has done archaeological fieldwork and analyzed fauna in Kenya, Tanzania, and coastal California. Her recent research has focused on culinary processing as the link between food-getting activities and nutrition, gender and food, and how archaeological fauna can aid in studying indigenous landscape management. She has worked as a zooarchaeologist with the project led by Dr. Kent Lightfoot and the Amah Mutsun Tribal Band since 2006.

5. Mike Grone is the Santa Cruz District State Archaeologist for California Department of State Parks. His UC Berkeley research focused on indigenous shoreline stewardship practices on the Santa Cruz coast, in collaboration with the Amah Mutsun Tribal Band. This research program takes a long-term view regarding indigenous use and management of shellfish and seaweed through community-engaged archaeology, historical ecology, zooarchaeology, ethnography, and Native oral traditions. His interdisciplinary, community-based approach aims to enhance our understanding of the people and processes that have interacted with and shaped our beloved coastlines for thousands of years.

6. Mark D. Hylkema is former Santa Cruz District Archaeologist for California State Parks. His long and ongoing career has focussed on the central coast, especially southern San Mateo and Santa Cruz Counties and adjacent regions of the southern San Francisco Bay, and is remarkable for its early and significant outreach to tribes. He has also taught a range of courses in community colleges in the South Bay. His fieldwork, publications, and outreach as a Parks representative laid the groundwork for much of the work presented here today.

7. Kent Lightfoot is Professor and Class of 1960 Chair in Undergraduate Education in the Anthropology Department and Curator of North American Archaeology in the Phoebe A Hearst Museum of Anthropology at the University of California, Berkeley. He joined the Berkeley faculty in 1987. He received his BA from Stanford University and his PhD from Arizona State University. He has done archaeological work in New England, the American Southwest, Alaska, Hawaii, and the Pacific Coast of North America. His recent investigations have focused on the archaeology of colonialism, the shell mounds of the greater San Francisco Bay Area, and indigenous landscape management practices along the central coast of California. His many publications include California Indians and their Environments: An Introduction (with Otis Parrish) and Indians, Missionaries, and Merchants: The Legacy of Colonial Encounters on the California Frontiers

8. Valentin Lopez is the Chairman of the Amah Mutsun Tribal Band, one of three historic tribes that are recognized as Ohlone. The Amah Mutsun are comprised of the indigenous descendants forcibly taken to Missions San Juan Bautista and Santa Cruz. He is a Native American Adviser to the National Alliance on Mental Illness (NAMI) and the Phoebe Hearst Museum of Anthropology. Chairman Lopez is also the President of the Amah Mutsun Land Trust, which was established in 2012. The Amah Mutsun are very active in land conservation and protection efforts within their traditional tribal territory.

9. Tsim D. Schneider is a citizen of the Federated Indians of Graton Rancheria and an Associate Professor. Dr. Schneider's current archaeological and historical research examines Indigenous responses to colonialism in the San Francisco Bay region of California and has been published by American Indian Quarterly, American Anthropologist, and American Antiquity. His 2021 book The Archaeology of Refuge and Recourse: Coast Miwok Resilience and Indigenous Hinterlands in Colonial California, sets a benchmark for restorative indigenous archaeology of colonial Native histories.

10. Alexii Sigona is a member of the Amah Mutsun Tribal Band and is currently a PhD student in the Department of Environmental Science, Policy and Management at UC Berkeley. Alexii is particularly interested in how Indigenous Peoples’ engagement in land stewardship practices can be integral for cultural revitalization. Furthermore, he believes that by fulfilling land stewardship obligations, Indigenous communities can work to heal themselves as well as our environment. In the summer, Alexii serves as a Native Land Steward for the Amah Mutsun Land Trust.
Added to the calendar on Tue, Jan 17, 2023 7:53AM
§
by Amah Mutsun Tribal Band, UCSC, UC Berkeley

original image (825x401)
Add Your Comments
Support Independent Media
We are 100% volunteer and depend on your participation to sustain our efforts!