by Ramon du Houx
State lawmakers and local elected officials urged legislation on a windfall profits cap on oil companies for the price gouging practices. The penalty would provide a rebate for CA consumers. Elected Officials to Protect America (EOPA) California local elected officials from frontline communities spoke about how their communities are being affected from gas prices as the oil industry continues to rake in billions of dollars in profits with no regard for how it hurts Californians, our climate and security. 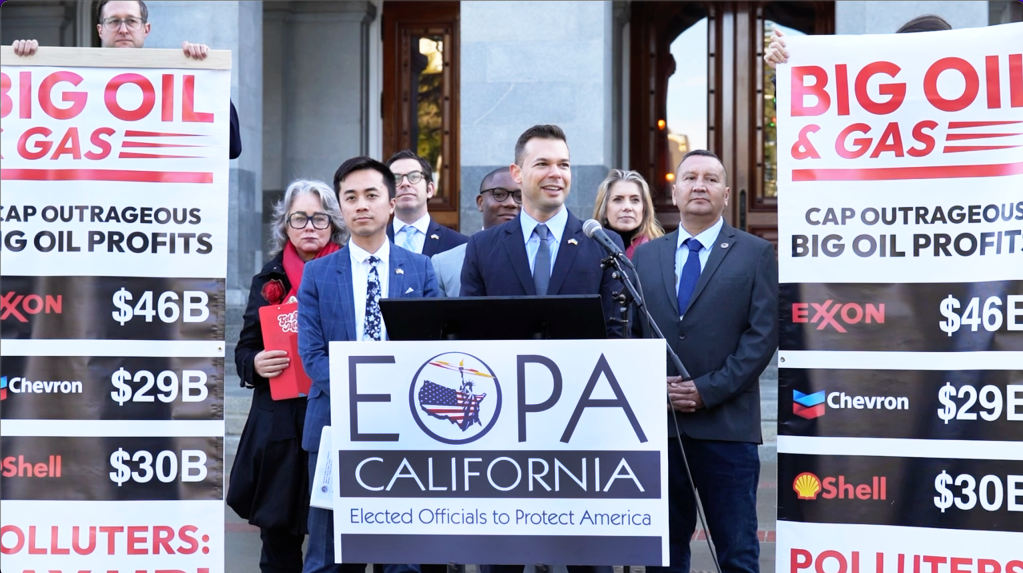 Sacramento. At a press conference at the Capitol, state lawmakers and local elected officials urged legislation on a windfall profits cap on oil companies for the price gouging practices. The penalty would provide a rebate for CA consumers. Elected Officials to Protect America (EOPA) California local elected officials from frontline communities spoke about how their communities are being affected from gas prices as the oil industry continues to rake in billions of dollars in profits with no regard for how it hurts Californians, our climate and security.

“Profits of ExxonMobil, Chevron, BP, and Shell have skyrocketed 169 percent this year to $125 billion. The oil industry is using Putin’s war and inflation as shields to hide their price gouging. Enough is enough. We stand with the people of our state and urge the enactment of a windfall profits cap,” said CA State Sen. Henry Stern.

While crude oil prices were dropping, oil and gas companies were raising prices on California consumers by a record 84 cents per gallon in just 10 days.

“Oil refiners more than doubled their CA profits from the recent gas price spikes,” said Assemblymember Alex Lee. “This is just the latest of countless incidents underlining the urgency for California to become energy independent from fossil fuels.

"My message to the oil companies is: It’s plain and clear to the legislature, the governor and the American people that you are price gouging and engaging in unfettered corporate greed using inflation to cover up your tracks but we see you” - Asm. Alex Lee

There has been activity from the oil industry which the Legislature has questioned in the recent past. That’s why this year the California Oil Refinery Cost Disclosure Act, SB 1322, became law and means that refiners must start reporting their profits per gallon of gas monthly starting in 2023.

Last Autumn, an unprecedented rise in gasoline prices led Governor Gavin Newsom to announce his goal to enact a windfall profits cap on oil companies for price gouging. He called for the Legislature to convene a special session to get it done, saying oil companies should be held responsible for “fleecing” customers.

“The audacity of the oil industry raising gas prices when crude was dropping in value is unconscionable. EOPA California, representing over 462 elected officials from 49 counties, strongly support Governor Newsom and his proposal for a windfall profit cap on the oil industry. We must protect consumers from price gouging. We urge action to bring justice and security to the people of California, and enact a windfall profit cap,” said Alex Cornell du Houx, former Maine state Representative, Marine combat veteran, President of Elected Officials to Protect America and Co-Founder. “Too many people have been forced to cut back on necessities just to fill their tank for their working commute. This issue highlights the absolute necessity to become energy independent from fossil fuels. Californians shouldn’t needlessly suffer from oil price fluctuations, and deadly greenhouse gas emissions. The transition to a 100 percent clean energy economy must be accelerated for our national security.”

In Gov. Newsom’s special session proclamation, he called for legislation to deter price gouging by oil companies by imposing a financial penalty on excessive profit margins, with that money returned to Californians. He also asked for bills to increase transparency and regulatory oversight of the industry to evaluate pricing and supply shortages. The governor’s proposal means that companies engaged in extraction, production, and refining of oil will pay a higher rate on their earnings above a set amount each year, and these recouped windfall profits will then be directed to rebates and or refunds to California taxpayers impacted by high gas prices.

“According to a Consumer Watchdog poll, more than 60 percent of California voters support a proposal to impose a windfall profits cap and price gouging rebate on oil refiners for this outrageous abuse of taxpayers. While our gas prices have gone through the roof, oil company profits more than doubled. It’s criminal,” said Heidi Harmon, former San Luis Opibso Mayor. “I commend Governor Newsom for his call to action and look to the legislature to right this injustice and bring relief to consumers. All elected officials need to take a stand against this corporate greed and stand for a windfall profit cap against price gouging.”

Oil companies have failed to provide a credible explanation for the divergence between prices in California compared to the national average. The dramatic price hikes cannot be attributed solely to refinery maintenance issues, hurricane disruptions, OPEC cutting production by 2 percent nationally, or state taxes that remain stable.

Some industry spokespeople blame it on five refineries temporarily shutting down at the same time. But this has happened in the past without prices at the pump skyrocketing anywhere near this degree. In September 2019, five refineries experienced unplanned maintenance issues, and California was faced with several refinery outages. The price spike was a mere 34 cents — a fraction of what Californians have been paying.

“Refinery pre-scheduled maintenance is not a credible explanation for the sudden $1.54 increase in what refineries charge for every gallon of gas Californians buy,” said Igor Tregub, former Berkeley Rent Stabilization Board Member, Ukraine native and EOPA California Leadership Council member. “Furthermore, the nerve of the oil companies using the war in my homeland to make exorbitant profits is inhumane. The people of Ukraine would not be suffering if Europe wasn’t dependent on Russian gas. The people of California wouldn’t be deciding what supplies not to buy because they have to fill up their gas tanks to get to work. For our security and the world’s, we need energy independence from fossil fuels. First, we need to ensure a windfall profit cap and rebate for consumers becomes law. The legislature must see this as a national security issue and get it done.”

“Families have been forced to cut back on spending and rethink their budgets. I thank Governor Newsom for standing up for Californians who are being taken advantage of at the gas pump by a cartel of oil refiners. It’s apparent that this situation is the consequence of the five big oil refiners in California who make 97 percent of the gasoline — controlling the supply to artificially drive-up prices. A windfall profits tax solution that takes excessive profits out of the hands of oil corporations and puts money back into the hands of consumers surely deserves a special session,” said Eduardo Martinez, Richmond Vice Mayor, & Mayor- elect, EOPA California Leadership Council member. “We live in the shadow of these refineries that spew toxic pollution into the air we breathe on a daily basis. People I represent have died prematurely because of our zip code’s dirty air. Now those same companies are stealing from the people of California.”

California’s five largest refiners — Chevron, Marathon, PBF Energy Phillips 66 and Valero — made $26 billion selling fossil fuels, virtually doubling profits from the year before. These are the same refineries that have caused physical and financial harm to residents from ongoing illnesses like asthma, cancer, miscarriages and premature deaths. 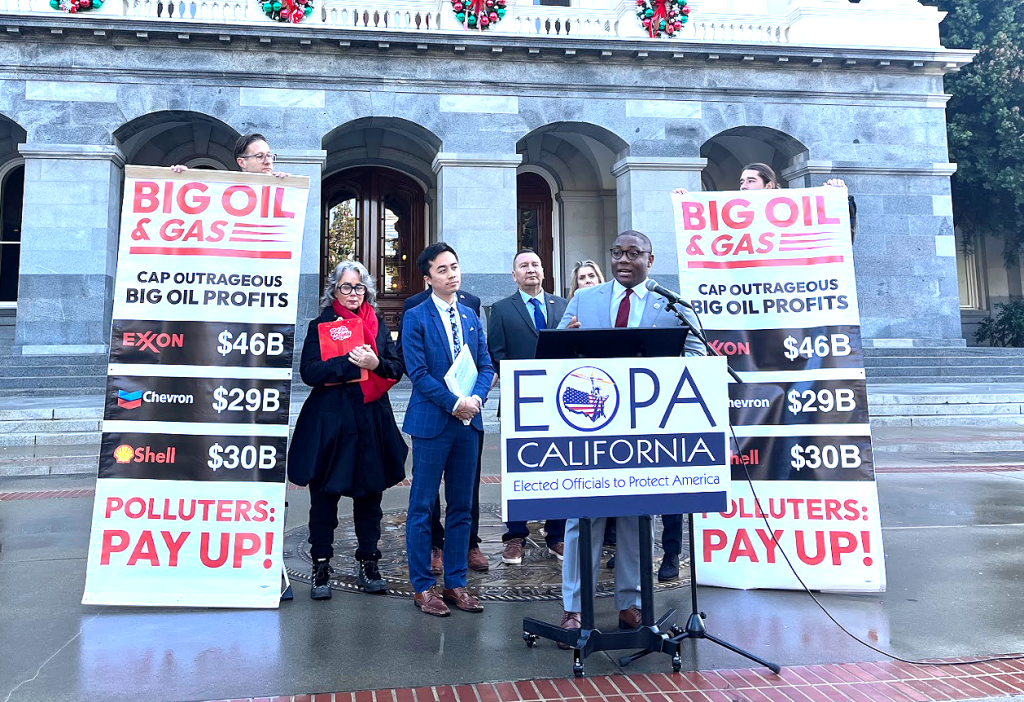 “The oil industry continues to rake in billions of dollars with no regard for how it hurts communities that are already suffering from inflation, and the dangerous effects of fossil fuel pollution on our health and climate,” said Alex Walker-Griffin, Hercules Vice Mayor, California, veteran, EOPA CA Leadership Council. “People deserve justice from this price gouging with a windfall profits cap. We need immediate legislative action.”

Consumer Watchdog research showed that the gap between the average price per gallon at the pump in California and what consumers were paying in the rest of the United States was  close to $3 in the second quarter of 2022 alone.

Then OPEC, the world’s leading oil producers, announced that they will cut production by 2 million barrels per day, The California Energy Commission said the OPEC decision is expected to have a “relatively modest impact on the price of gasoline in California.

“Putin’s war in Ukraine and OPEC’s slight limiting of the oil supply cannot account for the increase in the price of gasoline here in California when across the rest of the country prices have dropped. Corporate greed is hurting innocent Californians who are already dealing with inflation, and the ravages of the climate crisis that fossil fuel usage continues to fuel. These corporations don’t care about consumers,” said Phillip Williams, Councilmember, Yurok Tribe, veteran, EOPA CA Leadership Council member. “It’s up to our lawmakers to right this wrong for the people of California, their health, economic well being and for our National security. A windfall profits cap must become law.``

Consumer Watchdog reports that the four oil refiners that report quarterly profits to their investors reported 30 percent greater profits from California during 2022 than from anywhere else in the nation or world.  The four refiners that report quarterly profits – Valero, PBF, Phillips 66, and Marathon – made an average of 86 cents per gallon in profit during the second quarter and 73 cents per gallon during the third quarter.  Until this year, none of the four oil refiners have made profits that have exceeded 50 cents per gallon.

Chevron only reports its profits on an annual basis. During the last 20 years, Chevron has made profits per gallon in California that have exceeded 50 cents per gallon only 3 times.

The situation is clear, now it’s time for the legislature to act. 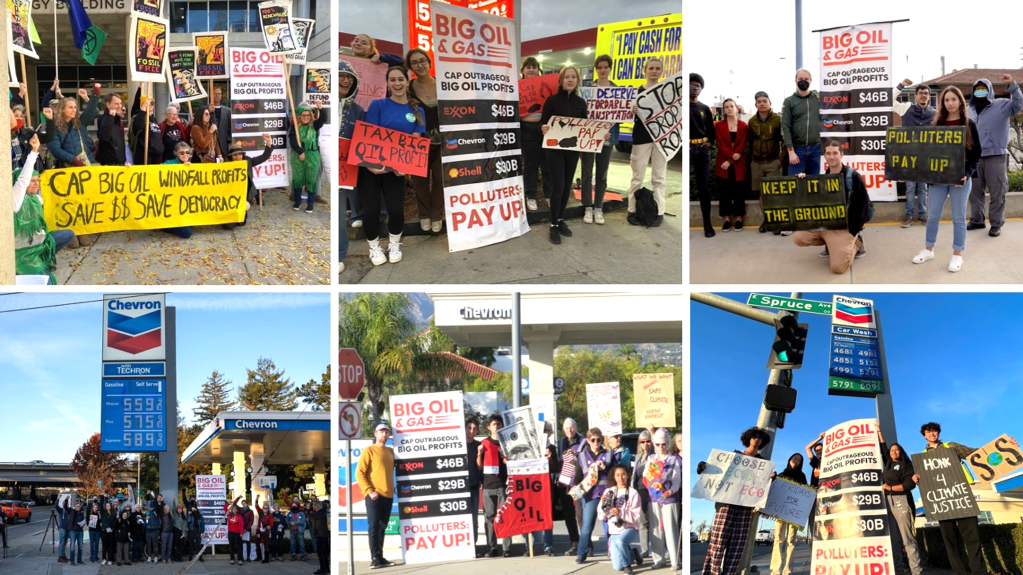 Protests took place in favor of the windfall profits cap on oil companies that would make the industry pay a penalty for price gouging, which would be recycled back as rebates for consumers.

Members from EOPA California were in Sacramento on the 5th for their inaugural California Climate Emergency & Energy Security Summit at the California Energy Commission. At the summit they discussed the necessity for the windfall profits cap and how moving to a 100 percent clean energy economy is key to a just transition and national security. There was a major focus on the potential of offshore wind to accelerate that goal.

In the afternoon of our press conference Governor Gavin Newsom introduced the legislation for a windfall profits cap on oil refineries that would lead to rebates for consumers. It is a penalty on oil companies. The language of the proposed price gouging penalty can be found here. Senator Nancy Skinner (D-Berkeley) will be the lead on the legislation.

“California’s price gouging penalty is simple – either Big Oil reins in the profits and prices, or they’ll pay a penalty,” said Governor Newsom in a release. “Big Oil has been lying and gouging Californians to line their own pockets long enough. I look forward to the work ahead with our partners in the Legislature to get this done.”

END_OF_DOCUMENT_TOKEN_TO_BE_REPLACED
Add Your Comments
Support Independent Media
We are 100% volunteer and depend on your participation to sustain our efforts!