by Dan Bacher
The oil and gas industry has spent an astounding $30 million to date in the 2021-22 Legislative Session against SB 1137, legislation to mandate buffer zones around oil and gas wells, and other bills they opposed. 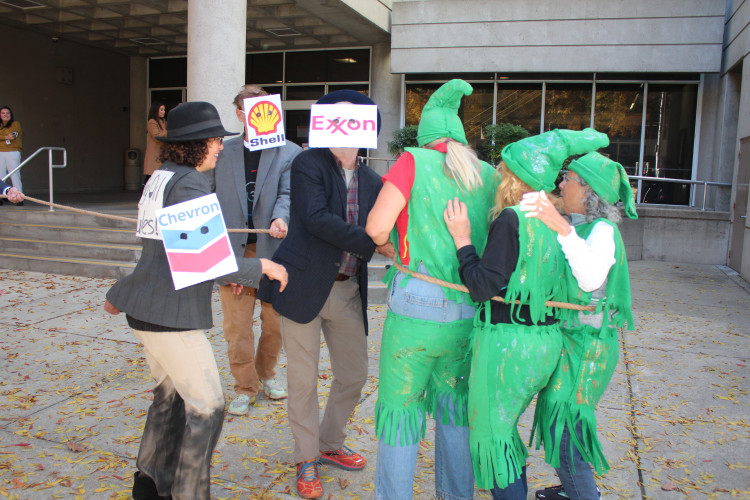 Flush with billions of dollars in record profits, the oil and gas companies in California have been spending big money lately in an attempt to influence the California Legislature and voters and continue the systemic regulatory capture that has fouled California government for decades.

The oil and gas industry has spent an astounding $30 million to date in the 2021-22 Legislative Session against SB 1137, legislation to mandate buffer zones around oil and gas wells, and other bills they were opposed to. We won't know the final lobbying numbers until around January 31, 2022.

Big Oil and the Western States Petroleum Association (WSPA) spent $4,573,758 in lobbying expenses from September 1 to October 31, 2022. That brings the total of oil and gas corporation lobbying expenses to $30,029,638 in the last seven quarters of the 2021-22 Legislative Session: cal-access.sos.ca.gov/…

The Western States Petroleum Association, the largest and most powerful corporate lobbying group in Sacramento, spent $2,164,967 of that $4,573,758 in lobbying expenses in the seventh quarter of the legislative session. That brings the total of the lobbying expenses by WSPA alone to $8,910,825 in the 2021-22 session.

While a long and hard-fought campaign by environmental justice groups, with the help of Governor Gavin Newsom, was able to finally get SB 1137 approved by the Legislature, other important bills were stopped by oil industry-backed legislators. Those measures include a bill to ban offshore drilling off the California coast and another bill to divest State of California pension funds from investments in the fossil fuel industry.

The oil and gas drillers have also spent $9.2 million to date to gather signatures for a ballot referendum to overturn SB 1137, the new law to mandate 3200 foot setbacks between oil and gas operations and homes, schools, hospitals and other facilities.

Just 3 days after California Governor Gavin Newsom signed a bill on September 16, in Vallejo mandating health and safety setbacks of 3200 feet between oil wells and vulnerable communities in California, the powerful oil industry launched an initiative campaign to reverse the new law.

Signature gatherers funded by the oil drillers are now asking the public to sign petitions to put the referendum overturning the setbacks law, SB 1137, on the ballot. But petition circulators are telling California voters that their ballot measure would ban new oil and gas wells near homes when it would actually do the very opposite: insideclimatenews.org/

An analysis of the state’s data by the Fractracker Alliance and Consumer Watchdog reveals that 8 companies funding the campaign have already received 89 permits, including 86 rework permits and 3 new permits, for drilling closer to communities than the ban allows ahead of the January 1, 2022 date.

These 8 oil companies, who currently operate thousands of wells within the banned distance of 3200 feet from homes, schools, hospitals and other facilities, have contributed $7.5 million of the total $9.2 million raised to overturn the law by gathering signatures to qualify a referendum, according to the groups, according to the two groups.

And this is just part of the gusher of money spent by the oil and gas industry on campaigns and lobbying in 2022 to date.

The biggest sources of outside spending in legislative races in the November 2022 election cycle were oil and gas companies and electric utilities, according to Ben Christopher and Sameea Kamal of Cal Matters.

“Those organizations have spent more than $7.6 million, roughly one-fifth of the total. Most of that spending happened before Newsom announced a December special legislative session on his oil tax plan.”

“The oil and gas industry knows no bounds when it comes to putting profits over people and subverting the democratic process,” said Brandon Dawson, Sierra Club California Director. “California frontline communities have been fighting for protections from toxic oil and gas pollution for decades, and the setbacks mandated by SB 1137 will go a long way towards preserving those communities’ air quality and ecosystems.”

Big Oil has been able to get away with what it does in California for decades because of the enormous influence the Western States Petroleum Association, the trade group for the oil industry, and oil and gas companies, has exerted over the California Legislature, regulatory agencies and media.

Over the past four years, fossil fuel companies paid almost $77.5 million to lobby lawmakers in Sacramento, reported Josh Slowiczek in Capital and Main on May 14.

“Oil and gas interests spent four times as much as environmental advocacy groups and almost six times as much as clean energy firms on lobbying efforts in California between 2018 and 2021, according to a Capital & Main analysis — reflecting the intensity of the industry’s efforts to influence policy in a state whose leaders have vowed to build an energy future free of fossil fuels,” Slowiczek wrote.

WSPA and Big Oil wield their power in 8 major ways: through (1) lobbying; (2) campaign spending; (3) serving on and putting shills on regulatory panels; (4) creating Astroturf groups; (5) working in collaboration with media; (6) creating alliances with labor unions; (7) contributing to non profit organizations; and (8) sponsoring awards ceremonies, including those for legislators and journalists.

WSPA and Big Oil have for years worked closely with media outlets and more recently have sponsored awards for legislators and journalists.

Can you guess who was one of the sponsors of the LA Times awards? Yes, you guessed right — WSPA was a sponsor.

According to a tweet from @OfficialWSPA, "Today @latimes acknowledged a woman who is already well known in our industry as a trailblazer and inspiration to tens of thousands of women. Congrats to our fearless leader @WSPAPrez for being recognized as a shortlisted nominee for the Inspirational Women Awards."

In addition, four LA Times reporters this year received the “Courage in Journalism” award from the Sacramento Press Club. Yes, the Western States Petroleum Association was one of the sponsors of these awards also.

In 2015, I wrote this article about how the LA Times and the California Resources Corporation teamed up on a propaganda website: https://www.dailykos.com/story/2015/10/30/1442947/-LA-Times-and-Big-Oil-team-up-on-propaganda-website. Fortunately, the Times is no longer managing and running that website.

Photo: The Last Chance Alliance, Oil and Gas Network local climate groups held their protest against Big Oil's price gouging in front of the California Energy Commission office before the hearing on windfall profits on Nov. 29. Photo by Dan Bacher.