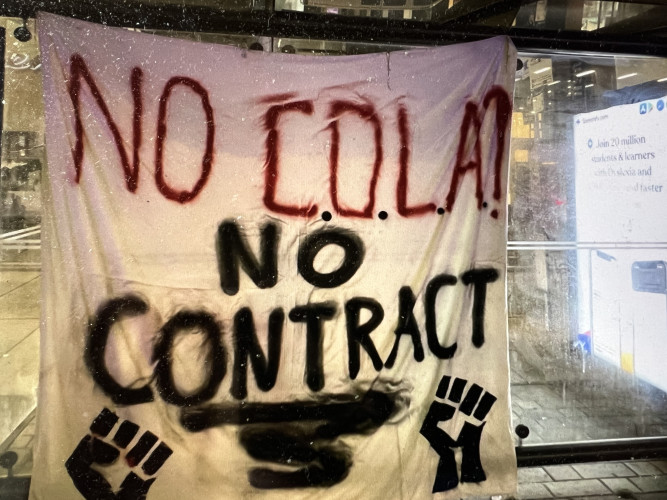 Join the Rallies and Picket Lines

Their strike is for a living wage, housing, childcare and worker rights. In response, the UC management has spent huge sums of money on union busting lawyers.

The conditions faced by UC postdoctoral candidates, researchers and graduate student instructors are not unique.

Adjunct faculty throughout the country face similar conditions of exploitation and attacks by management, often with little support from their union leaders who have generally accepted two tier contracts that treat adjuncts as poorly paid second-class educators.

The Jerry Brown and Gavin Newsom appointed UC regents are mostly well to do corporatists who want more privatization of the University as is being pushed in Community Colleges, K-12 schools, and the CSUs.

The refusal to pay living wages to workers who are being used as cheap labor is an insult not only to them, but to all the people of California.

While there are over 180 billionaires in California, these workers struggle to survive. While California had a budget surplus of $97 billion, there were no demands by labor “leaders” to pay all public workers, including UAW education workers, living wages.

We also protest the silence by Governor Gavin Newsom, Lieutenant Governor Eleni Kounalakis, Assembly Speaker Anthony Rendon, and State Superintendent of Public Instruction Tony Thurmond who are all Ex Officio Regents. These politicians, who have been supported by our unions, apparently don’t think the issue of living wages for public education workers is something that they should be demanding.

We urge all California workers, students, and staff to join this struggle in a united action. Education unions like UTR, CFT, OEA and many other locals in the state should join together in work actions and to unify our struggles.

CCSFHEAT.org
END_OF_DOCUMENT_TOKEN_TO_BE_REPLACED
Add Your Comments
Support Independent Media
We are 100% volunteer and depend on your participation to sustain our efforts!