Edge of extinction: Zero Delta smelt caught in CDFW trawl survey for the fifth October in a row

by Dan Bacher
The last time Delta smelt were found in the CDFW’s fall midwater trawl survey in was in October 2017. Only 2 of the endangered fish were caught by state biologists at the time. 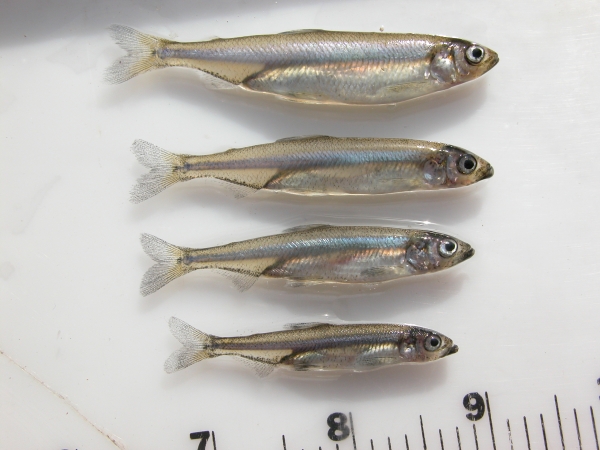 For the fifth October in a row, the California Department of Fish and Wildlife has caught zero Delta smelt during its Fall Midwater Trawl Survey of the Sacramento-San Joaquin River Delta.

Delta smelt, an indicator species for the broader ecological health of the estuary, are found only in the Delta. The smelt typically reach a length of 2 to 3 inches and have a steely blue sheen on their sides, giving the fish an almost translucent look.

The last time Delta smelt were found in CDFW’s October survey was in 2017. Only 2 of fish were caught by state biologists at the time.

2017 was also the last year when any Delta smelt were discovered in the entire four month survey - and the 2 smelt caught in October were the only ones recorded that year.

The final results of CDFW’s four-month survey of pelagic (open water) fish species, conducted from September through mid-December, won’t be available until late December or early next year. Normally a report from the Department summarizing the results of the abundance indices (a relative measure of abundance) for the different fish species is released at that time.

I will be writing a summary of each month’s results, as made available, until the final report for the fourth month survey is published.

Once the most abundant fish on the entire estuary, the Delta smelt is now near-extinction in the wild, although U.C. Davis continues to raise the fish in a captive breeding program. Thousands of these hatchery-raised smelt were released into the Delta in an experiment late last year and early this year.

On December 14 and 15,  2022, the U.S. Fish and Wildlife Service and CDFW, along with the California Department of Water Resources and U.S. Bureau of Reclamation, experimentally released 12,800 hatchery-raised Delta smelt into the Delta for the first time. The agencies released another load of smelt in January and three more in early February.

The purpose of this Delta smelt project is to “benefit conservation of the species through studies of experimental release of captively-produced fish into a portion of its current range,” according to the service: http://ow.ly/W2Fj50HeENQ

The Delta smelt population has plummeted over the decades since the State Water Project began exporting Delta water to San Joaquin Valley growers in 1967.

While there are several factors that scientists pinpoint for the ecosystem collapse, including toxic chemicals, decreasing water quality and invasive species, no factors figure greater in the collapse than water diversions from Central Valley rivers and the export of massive quantities of state and federal project water from the Delta to San Joaquin Valley agribusiness interests like Stewart and Lynda Resnick, owners of the Wonderful Company, and the Westlands Water District.

”Delta Smelt are the thread that ties the Delta together with the river system,” said Caleen Sisk, Chief of the Winnemem Wintu Tribe. “We all should understand how that affects all the water systems in the state. They are the irreplaceable thread that holds the Delta system together with Chinook salmon.”

The Department also reported an index of  261 longfin smelt, a cousin of the Delta smelt, in its surveying stations throughout the Delta this October. That compares to just 12 last October. That is the largest index reported for any October since 199, when an index of 2736 was reported.

The U.S. Fish and Wildlife Service on October 6 proposed the listing of the San Francisco Bay-Delta distinct population segment of longfin smelt as an “endangered” species under the Endangered Species Act (ESA).

”Scientific analysis shows the Bay-Delta longfin smelt is in danger of extinction throughout its range,” the service said in a statement. The Service is now seeking public comment for 60 days after publication on the proposed rule in the Federal Register.

In response to the proposed listing, Jon Rosenfield, Ph.D., senior scientist for San Francisco Baykeeper and a recognized expert on longfin smelt ecology, said, “Our local longfin smelt population is particularly sensitive to changes in the volume of fresh water flowing into San Francisco Bay. The longfin smelt’s catastrophic decline is yet another sign that water diversions from the rivers that feed the bay are unsustainable.”

Rosenfield said longfin smelt were once one of the most abundant fishes in the San Francisco Bay estuary, which includes the Sacramento-San Joaquin River Delta.

“But annual state surveys reveal that longfin smelt in San Francisco Bay have been at or near record low abundance almost every year since 2007 — and the species is nearly undetectable in other Northern California estuaries,” according to Rosenfield.

For the eighteenth October in a row, state scientists also caught zero Sacramento splittail, a native member of the minnow family found only in the Delta Estuary and Central Valley rivers. The last time that any splittail were reported in the survey in October was in 2004 when 2 splittail werer reported.

Striped bass, a gamefish from the Eastern Seaboard introduced to the Delta over 130 years, continue to fare poorly, but the index this October was better than last year. The CDFW caught an index of 34 young-of-the-year striped bass this October, compared with 10 last October.

The American shad, another introduced species, did better than last September, although the index has declined precipitously from historical levels. Biologists reported an index of 155 for this herring family member this October, compared with 53 in October 2021.

Finally, CDFW officials reported an index of 39 threadfin shad, an introduced forage fish, in October 2022. That is more than the index of 28 reported last October.

The decline of the Delta’s pelagic species has been catastrophic since the State Water Project went into operation in 1967. Between 1967 and 2020, the state’s Fall Midwater Trawl abundance indices for striped bass, Delta smelt, longfin smelt, American shad, splittail and threadfin shad have declined by 99.7, 100, 99.96, 67.9, 100, and 95 percent, respectively, according to Bill Jennings, Executive Director of the California Sportfishing Protection Alliance (CSPA).

Taken as five-year averages, the declines for striped bass, Delta smelt, longfin smelt, American shad, splittail and threadfin shad are 98.1, 99.8, 99.8, 26.2, 99.3 and 94.3 percent, respectively. said Jennings.
Add Your Comments
Support Independent Media
We are 100% volunteer and depend on your participation to sustain our efforts!