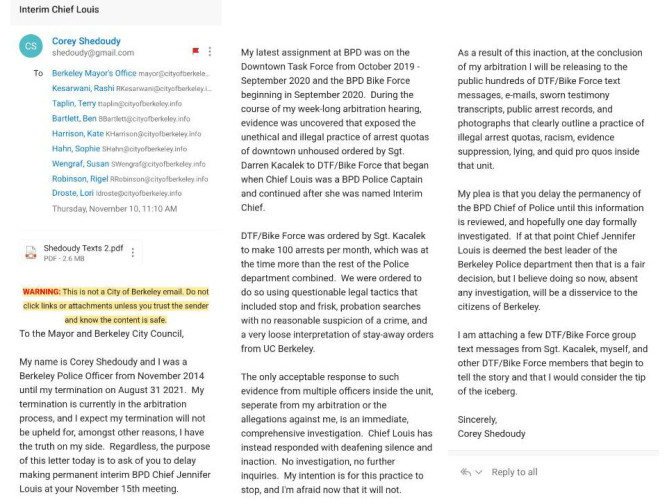 original image (960x720)
(INDYRADIO 17nov22) Exactly one week ago, the city council of Berkeley, California was set to vote on the appointment of their police chief, until council members and the mayor received an email from a whistleblower. Now, confirmation of the chief has been put on hold and Berkeley Police Association President Sgt. Darren Kacalek has taken a leave of absence from the police association board in the wake of numerous misconduct allegations.

Here we provide details and documents, according to the timeline of the past week, starting with the email from 11:10 AM last Thursday. At that time, to most people, the whistleblower was unnamed, but council members and Mayor were among the first to know. After this transcript of the email, our timeline continues with a press release from the Berkeley Police Accountability Board


My name is Corey Shedoudy and I was a Berkeley Police Officer from November 2014 until my termination on August 31 2021. My termination is currently in the arbitration process, and I expect expect my termination will not be upheld for, amongst other reasons, I have the truth on my side. Regardless, the purpose of this letter today is to ask you to delay making permanent interim BPD Chief Jennifer Louis at your November 15th. Meeting.

My latest assignment at BPD was on the Downtown Task Force from October 2019 - September 2020 and the BPD Bike Force beginning in September 2020. During the course of my week-long arbitration hearing, evidence was uncovered that exposed the unethical and illegal practice of arrest quotas of downtown unhoused ordered by Sgt Darren Kacalek to DTF/Bike Force that began when Chief Louis was a BPD Police Captain and continued after she was named interim chief.

DTF/Bike Force was ordered by Sgt. Kacalek to make 100 arrests per month, which was at the time more than the rest of the police department combined. We were ordered to do so using questionable legal tactics that included stop and frisk, probation searches with no reasonable suspicion of a crime, and very loose interpretation of stay-away orders from UC Berkeley.

The only acceptable response to such evidence from multiple officers inside the unit, separate from my arbitration or the allegations against me, in an immediate comprehensive investigation. Chief Louis has instead responded with deafening silence and inaction. No investigation, no further inquiries. My intention is for this practice to stop, and I'm afraid now that it will not.

As the result of this inaction, at the conclusion of my arbitration I will be releasing to the public hundreds of DTF/Bike Force text messages, emails, sworn testimony transcripts, public arrest records, and photographs that clearly outline a practice of illegal arrest quotas, racism, evidence suppression, lying and quid pro quo inside the unit.

My plea is that you delay the permanency of the BPD Chief of Police until this information is reviewed, and hopefully one day formally investigated. If at that point Chief Jennifer Louis is deemed the best leader of the Berkeley Police Department then that is a fair decision, but I believe doing so now, absent any investigation, will be a disservice to the citizens of Berkeley.

I am attaching a few DTF/Bike Force Group text messages from Sgt. Kacalek. myself, and other DTF/Bike Force members that begin to tell the story that I would consider the tip of the iceberg.

I have become aware of allegations of severe misconduct within the Berkeley Police Department. These allegations come from a former BPD officer.

Currently, Interim Chief Jennifer Louis, who served as a Captain during the period of the alleged misconduct, is scheduled to be confirmed as the Permanent Chief of Police at a Berkeley City Council meeting tomorrow at 6 PM. The alleged misconduct includes text messages from Downtown Task Force/Bike Unit group chats with racist and anti-homeless statements and texts describing patterns of unlawful police practices. These include the establishment of arrest quotas, profiling, and rewards/punishments for arrest numbers. Additionally, it is alleged that Interim Chief Louis had prior awareness of the misconduct and took no action.

The allegations specifically implicate officers of BPD's DTF/Bike Unit and its Supervisor, Sgt. Darren Kacalek, President of the Berkeley Police Association. Sgt. Kacaleck is specifically alleged to have ordered the DTF/Bike Unit to make 100 arrests per month. In the texts Sgt. Kacalek allegedly makes anti-homeless and racist remarks, including suggesting that homeless individuals in the city could be “wipe[d] out” and that the bike unit would “ride by the bodies”. Sgt. Kacaleck also allegedly texted a link to a racist Facebook post suggesting a person could trade a “White Privilege Card” for a “Black Card” to receive “welfare checks”, “free college”, and an “Obama cell phone”. According to the former officer, these messages are only the “tip of the iceberg” and hundreds of corroborating records allegedly exist.

Despite these severe allegations, City Manager Dee Williams-Ridley concluded that the City Council should still confirm Interim Chief Louis tomorrow. After an “initial inquiry”, she believes that Interim Chief Louis was not aware of the alleged misconduct. These allegations involve multiple BPD policies, making it a matter squarely under the Board’s purview. I am not currently aware whether the City Manager had knowledge of these allegations before Thursday, but I do know that the PAB was never informed of any such allegations at any point before or during the hiring process.

Hastily confirming the Interim Chief now would severely undermine public confidence in the independent oversight that Berkeley’s citizens voted for in establishing the Police Accountability Board. It will also erode the City’s ability to “promote public trust”, a responsibility the City Charter entrusts the Board, and the City as a whole, to uphold. There is no conscionable way for the confirmation process to go forward tomorrow.

I call on the Berkeley City Council to delay the confirmation of Interim Chief Louis until a thorough independent investigation has been conducted by the PAB and the public has had the opportunity to review the evidence. I additionally call on community groups to amplify this message and call on all community members to come to the Tuesday, 6 PM meeting to urge City Council to delay the confirmation.

Continuing with our timeline, coverage began to appear, though the source was not yet identified until Secure Justice published their call for an investigation into BPD arrest quota policy, and linked a copy of the email from Officer Shedoudy.

On November 10, 2022, Berkeley Police Department (“BPD”) Officer Corey Shedoudy emailed the Mayor and CIty Council, alleging the presence of an arrest quota program for the Downtown Task Force Bike Patrol, of which he was a member. Officer Shedoudy is presently facing disciplinary action by BPD. Secure Justice calls on Attorney General Rob Bonta to investigate these claims into what might be a very illegal and unconstitutional pattern of police practice, involving racial profiling and targeting of unhoused populations.

Officer Shedoudy attached text messages to his email that appear to support his claims pertaining to the arrest quota program imposed by Sgt. Kacalek. Officer Shedoudy’s email further claims that the program allegedly began when Interim Police Chief Jennifer Louis was a Captain, and continued after she was named Interim Chief. On Tuesday November 15, the Berkeley City Council will consider naming Interim Chief Louis as the permanent chief of the department. Secure Justice calls for the City Council to postpone such an important decision until these serious allegations are investigated. Almost as troubling as the allegations themselves is the emailed response of City Manager Williams-Ridley to the City Council, first ordering that the email and text messages not be shared, and stating her belief that she believes there is no reason to pause the hiring of Louis.

BPD has a troubling past with regard to racial discrimination and its present stop-data reports reveal that BPD is specifically targeting Black drivers even more egregiously than the Oakland Police Department, which is presently in its record setting nineteenth year of federal monitoring due to its own culture of racial profiling and targeting Black Oaklanders.

At Tuesday's council meeting, Brendon Woods, Alameda County’s chief public defender, spoke out for postponing of Louis' confirmation, and suggested the council consider not appointing her at all, as reported by Katie Lauer at The Mercury News:

“To be honest, I do not have faith that she will also respond properly to these new allegations,” Woods said. “On July 6, I sent her an email outlining outrageous conduct by her officers, that they refuse to read youth Miranda rights while they’re on the phone with our attorneys. The officers we spoke to were hostile, they were rude and they would often hang up on our attorneys.”

Woods said he attempted to reach Louis again on July 10 and Aug. 8 but never got a response.

“Arrest quotas, comments about unhoused people and racism have no place in policing,” Woods said. “They seem to be prevalent in the Berkeley police department and prevalent under the current leadership.”

Regardless what happens next, we eagerly await the trove of evidence promised by officer Shedoudy, who is thus far one of the most effective whistleblowers we have seen.

INDYRADIO The future of radio comes not from the Tower of Corporate Media but belongs to us.

END_OF_DOCUMENT_TOKEN_TO_BE_REPLACED
Add Your Comments
Support Independent Media
We are 100% volunteer and depend on your participation to sustain our efforts!