Speaking for the Water: Indigenous Women Speak for the Children and Rivers at COP27

by By Brenda Norrell
Indigenous women held a Water Ceremony at the United Nations Climate Summit in Egypt and spoke out against the oil and gas industry, and gold mining, which is destroying their lives and rivers, and the future for their children. 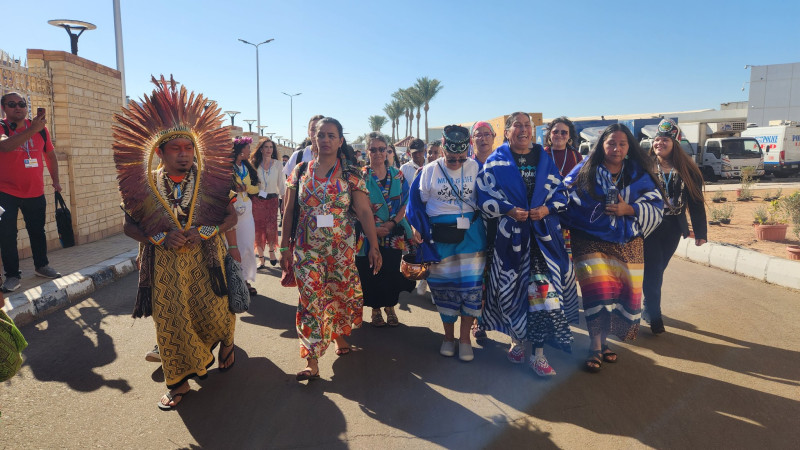 Ponca children have asthma and are using inhalers because of the oil and gas industry in Oklahoma, which is now a massive crime scene. In Kenya, children dig for water before going to school. In Nigeria, the water is poisoned by oil and gas wells and fracking and women and children are suffering.

Speaking during a panel at the United Nations Climate Summit in Egypt, Casey Camp-Horinek, Ponca, said she lives in the Occupied Territory of Oklahoma.

"Mass murderers called fossil fuel industries are there to kill us and nothing more," Casey said during an Indigenous Climate Action Panel, after leading a Water Ceremony in the morning.

In Ponca territory, 100 percent of Ponca families have cancer and children have asthma and must use inhalers from the time they can walk.

There are 10,000 fracking sites on the lands of 39 federally recognized tribes in Oklahoma. The water from fracking is defiled for life.

"Water has memory. She has life, she has a way of being that is sacred, that is a part of us. When she is hurt and poisoned, we are as well."

"Our spirits are hurt, but not gone."

In Nigeria, it is a need for water, and too much water from floods. In the Niger Delta. It is the women who are most impacted. Children have to miss school because they have to support their families at home.

In Cameroon, there are long difficult walks to get water. In the Niger Delta, they are drinking poisonous water. Toxic gases from oil and gas wells are released into the air and the runoff from the roofs are now acidic, making rainwater too toxic to drink.

Oil and gas extraction is polluting the water, and poisoning the fish. The life expectancy is about 40 to 45 years, said Emem Okun of Kebetkache women and member of Grassroots Global Justice's delegation.

By 2050, as many as 86 million Africans will be forced to migrate within their own countries due to climate change.

In Kenya, women are fighting dams and the land is suffering from drought.

Rukia Ahmed (The Hummingbird) said, "I come from a pastoralist community who are the most affected by climate change in northeastern Kenya. My people are starving due to extreme droughts. Their livestock are dying and they are at a risk of dying too! I am here at COP27 to demand climate justice."

In the Pacific Islands, people are vulnerable because of climate change and militarization. The United States military is contaminating the aquifer in Guam and is not held accountable.

"I come with the message to defend water, to defend life. Youth in Guahan are defending the freshwater coming out from our cliffs going out to our oceans from a firing range being built. We need peace just as much as we need climate action," said Pacific Islander Moñeka de Oro.

Hupa in northern California are removing hydroelectric dams, which are being promoted as a false solution for climate change.

People must not be exterminated by corporate greed, said Danielle Frank of Ríos to Rivers and youth leader of the Hupa Tribe in the Klamath River Basin.

“Indigenous resistance to dams has been constant. We have known since the beginning that cutting off the flow of rivers destroys not just the fish and ecosystem, but the people who depend on these food sources and the cultural connections rivers provide," she said in a statement.

"Cultures grew up on rivers – without rivers, we would not exist. Our people have suffered enough for the profit of others."

Listen to Indigenous from Brazil in defense of the water, which is in Portuguese.

Top photo: Indigenous grandmothers and leaders from all over the world hold a water ceremony and march through COP27 in Sharm El-Sheikh, Egypt calling for respect and protection of all waters and lands. WaterIsLife. Photo by Adrien Salazar, Grassroots Global Justice Alliance.
Censored News is a service to Indigenous Peoples and Human Rights, with no ads, grants or revenues. Now in its 17th year, it has 22 million page views.
END_OF_DOCUMENT_TOKEN_TO_BE_REPLACED
§
by By Brenda Norrell 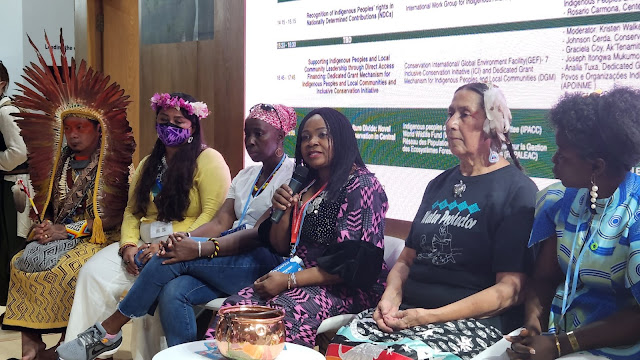 Emem Okun of Kebetkache women and a member of Grassroots Global Justice's delegation to COP 27 shares her experiences enduring polluted water in her community in the Niger Delta in Nigeria on a panel of Indigenous leaders.
END_OF_DOCUMENT_TOKEN_TO_BE_REPLACED
§
by By Brenda Norrell 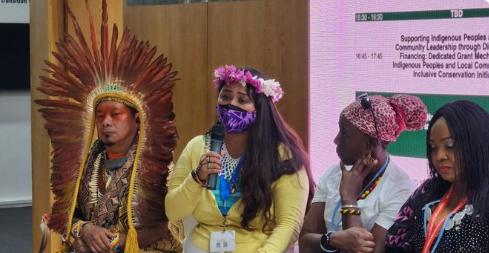 In the Pacific Islands, people are vulnerable because of climate change and militarization. The United States military is contaminating the aquifer in Guam and is not held accountable.

"I come with the message to defend water, to defend life. Youth in Guahan are defending the freshwater coming out from our cliffs going out to our oceans from a firing range being built. We need peace just as much as we need climate action," said Pacific Islander Moñeka de Oro.
END_OF_DOCUMENT_TOKEN_TO_BE_REPLACED
Add Your Comments
Support Independent Media
We are 100% volunteer and depend on your participation to sustain our efforts!