by INDYRADIO
Shortly after Elon Musk decided to capitalize on the blue checkmark Twitter has used for "active, notable and authentic" accounts, billions of dollars worth of reputation was lost on Wall Street. Abuse of the "blue checkmark" by imposters brought corporate giants to their knees. You can provide anonymous feedback to Twitter about this debacle, via their help center. 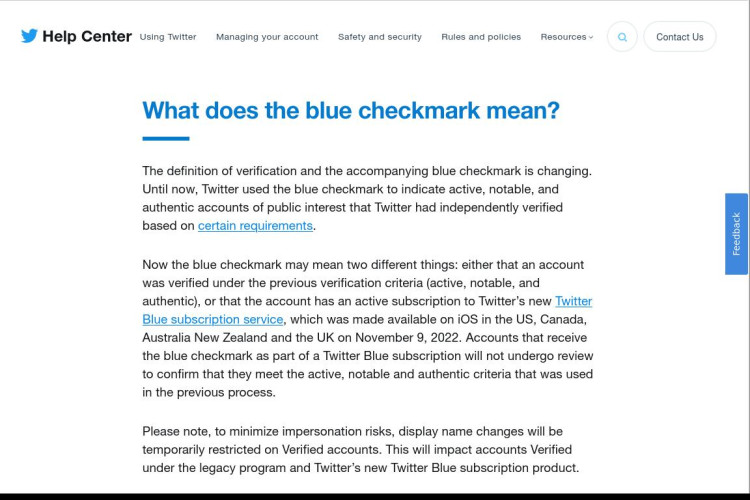 Don't spend much time on that page. While you are there, you will be studied by KAMPYLE dot COM, which does research using artificial intelligence, so use the Librewolf browser, which will block them.

The domain kampyle dot com is propagated by the network of FASTLY - in SAN FRANCISCO. It will likely redirect you to Medallia dot com. MEDALLIA is proud of their customers, like COMCAST and AIRBNB for whom MEDALLIA has worked wonders. They do not mention Twitter, but if you block the addresses of FASTLY, you will find your Twitter Experience to be somewhat hobbled.

The screencap, explaining "What does the blue checkmark mean?" was taken at 2:00PM CST, and the form was still accepting input from the blue button on the right. While researching this phenomenon, we are learning more about Twitter, and will share what we find later today.

Until then we ask, "Does Elon Musk know what he now owns, and how much does he understand?"

- Dave
END_OF_DOCUMENT_TOKEN_TO_BE_REPLACED
Add Your Comments
Support Independent Media
We are 100% volunteer and depend on your participation to sustain our efforts!