Back to the Way Things Were 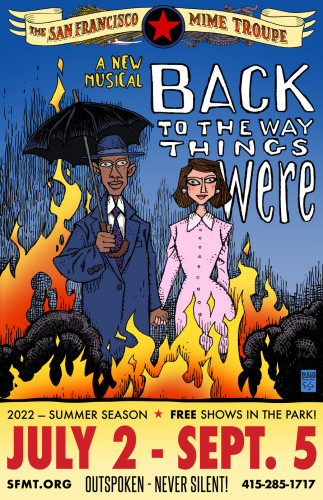 Available for a limited time before the election NOW through Sun, Nov 6 (11:59pm PDT) and FREE to watch on Vimeo ACROSS THE COUNTRY AND AROUND THE WORLD!

Visit VIMEO to watch FREE!
Using promo code: powertothepeople
Tip - enter code before logging your personal info and use the link above to access the video.

We encourage you to make a suggested donation of $20 either through this link or by using the donation link on the Vimeo page.

In a country where we can finally stop wearing masks to get pizza and go to the movies, and where we again have a president who isn’t dumb as a two dollar ham, hard-working, middle-aged liberals Ralph and Alice wistfully yearn for The before Times, when things seemed normal. But for Zoe — their twenty-something daughter who grew up in a world of climate change, housing crashes, student debt, the rise of dictatorships and the fall of democracies — there is no “better” to go back to. For her the purgatory of the last two years was just a pause from life in Hell. So what’s the point? Isn’t it easier to just give up?

END_OF_DOCUMENT_TOKEN_TO_BE_REPLACED
Added to the calendar on Sun, Nov 6, 2022 10:39AM
Add Your Comments
Support Independent Media
We are 100% volunteer and depend on your participation to sustain our efforts!