by Brenda Norrell
It has been six years since law enforcement attacked Standing Rock Water Protectors with tear gas, rubber bullets and tasers, and beat and arrested medics on Oct. 27, 2016. The court cases continue by victims of critical injuries as a result of excessive force by law enforcement. Paiute Shoshone journalist Myron Dewey documented law enforcement abuse. He was killed last year on an isolated dirt road. Now, a North Dakota court has ruled that TigerSwan mercenaries' documents are public record and are due to be released. 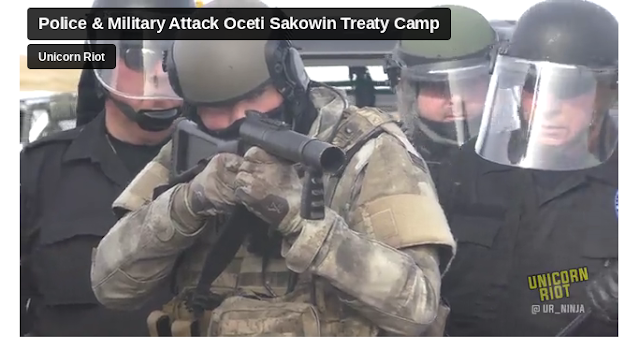 "They zip-tied us. They put us on the ground, hauled us in buses to the basement of the Morton County Jail, and imprisoned us in dog cages after they wrote numbers on our arms like the Jews going to gas chambers."

"We were kept in dog cages on the bare cement floor." Those are the words of Casey Camp Horinek, Ponca Councilwoman, who was in ceremony when dragged out and arrested. These are here words before the Inter-American Commission on Human Rights in Jamaica.

Before the brutal attack on Standing Rock Water Protectors on Oct. 27, 2016, Cheyenne River Lakota Chairman Harold Frazier met with Obama in Los Angeles and urged Obama to take action before it was too late.

Obama did not respond with help and instead went to a golf game and an expensive dinner fundraiser. It is one of our most censored news articles. Another censored news fact: Before Obama visited Standing Rock in June of 2014, the permits for the Dakota Access Pipeline were already approved in the spring of 2014, according to internal federal documents.

During the attacks by militarized police in 2016, women were strip-searched, and elderly Native women were locked in wire cages in a jail basement with numbers written on their arms as was done by the Nazis. Native elders were denied their medicines.

Obama gave false hope in press statements that Dakota Access Pipeline would be stopped. While Water Protectors were being brutalized the last week of October 2016, Obama responded to a question from the press and said, "We're going to let it play out for a few more weeks."

The abuse was accelerated by the media, including Billings media, which bolstered the comments of the Morton County Sheriff.

The role of TigerSwan mercenaries, and FBI undercover operative Heath Harmon, a tribal member of Three Affiliated Tribes in North Dakota, were later exposed by The Intercept media. It was Harmon's pistol, which he left in his coat pocket, that resulted in the arrest and imprisonment of Red Fawn.

Reporter Allen Brown exposed most of the facts known so far about TigerSwan and Harmon.

Instead of winning awards for investigative journalism, Brown was recently laid off by The Intercept. Brown's layoff happened as The Intercept was in court seeking the release of TigerSwan's documents at Standing Rock.

Paiute Shoshone journalist Myron Dewey, killed on an isolated road in Nevada last year, documented with video and drones the private security hired by Dakota Access Pipeline. Myron could have testified in the ongoing court cases based on excessive force by law enforcement resulting in critical injuries.

The internal documents of TigerSwan mercenaries, hired by the Dakota Access Pipeline, and directing law enforcement, are due to be released. Earlier, North Dakota's regulatory board found TigerSwan operated without a license in North Dakota and the court ruled thousands of documents are public records.

The militarized vehicles and equipment, and sheriffs deputies present, were the result of lobbying by the National Sheriffs Association. Its president stood to gain at the end of the Dakota Access Pipeline on the Louisiana coast.

Censored News has no paywalls, ads, grants or revenues. It is a service to Indigenous Peoples and human rights by volunteer journalists, broadcasters and global translators.
END_OF_DOCUMENT_TOKEN_TO_BE_REPLACED
§
by Brenda Norrell 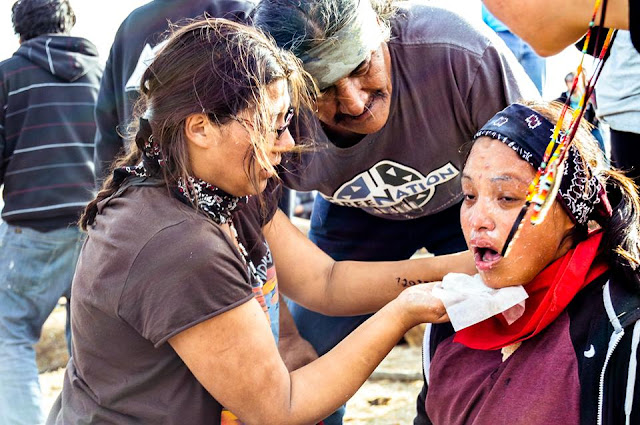 Medics were attacked, beaten and arrested by law enforcement on Oct. 27, 2016.
END_OF_DOCUMENT_TOKEN_TO_BE_REPLACED
§
by Brenda Norrell 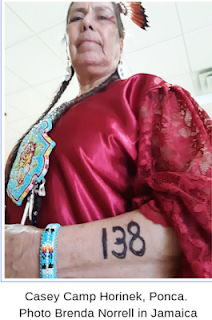 Casey Camp, Ponca Councilwoman, was arrested during ceremony, and caged in a "dog cage" on a concrete floor with a number written on her arm. Shown here, Casey testified before the Inter-American Commission on Human Rights in Jamaica. Photo by Brenda Norrell in Jamaica.
END_OF_DOCUMENT_TOKEN_TO_BE_REPLACED
§
by Brenda Norrell 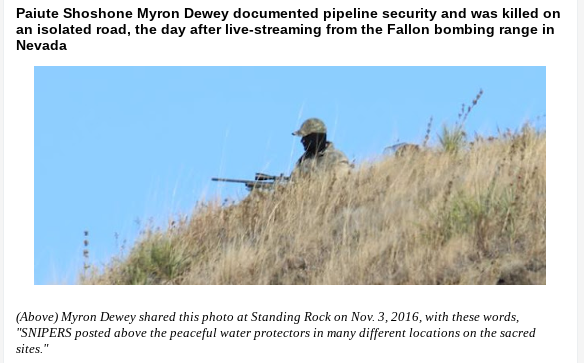 Paiute Shoshone Journalist Myron Dewey posted this photo from Standing Rock of a law enforcement sniper during the week of the attack in 2016. Myron was killed when a truck pulled into his lane on an isolated road in Nevada last year. He could have testified in ongoing court cases based on critical injuries of Water Protectors.
END_OF_DOCUMENT_TOKEN_TO_BE_REPLACED
Add Your Comments
Support Independent Media
We are 100% volunteer and depend on your participation to sustain our efforts!