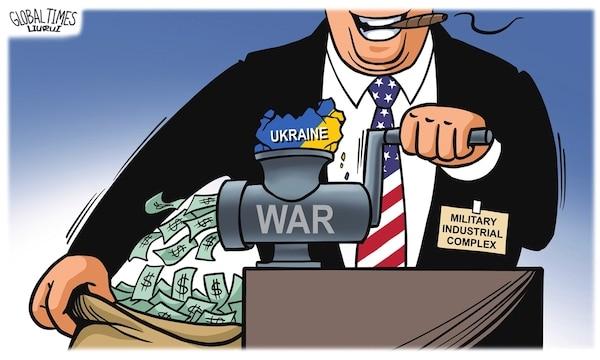 Abolish NATO, Shut Down US Bases Around The World - The Main Enemy Is At Home! For Working Class Strikes Globally To Stop The Wars!

The US ruling class is driving the world towards a global war. The Democrats and Republicans have joined together to send over $60 billion to Ukraine and are opposing any negotiations with Russia which could bring an end to the conflict. For decades, the US has pushed NATO expansion up to the borders of Russia. It was a major force behind the overthrow of the democratically-elected Ukrainian government in 2014, and aimed, in the civil war that followed, to goad Russia into a proxy war. The disastrous war in Ukraine was their intent, and they have exploited it to train and arm Ukrainian military forces, including the fascist Azov Battalion, as a means to weaken and destabilize Russia. In the wake of Russian military defeats, the American military establishment is crowing for further escalation, in order to break up the Russian Federation.

The US is a declining empire and, as empires decline, they become more aggressive. In a desperate attempt to shore up their declining position, the American ruling class has now embarked, with ever-greater recklessness, on the beginnings of a military confrontation with both Russia and China, which could end in nuclear war. In Asia, they are undertaking a massive militarization of Japan, South Korea, and Taiwan for an eventual confrontation with China. Taiwan is being turned into a gigantic American military encampment at China’s doorstep, and the One-China policy, which has been the basis of peaceful relations between the US and China, is being torn apart bit by bit. The American ruling class will not hesitate to use Taiwan as cannon fodder, as they have used Ukraine.

At the same time that the US ruling class is pushing for expanded wars abroad, it is increasing the war on working people in the US, with massive evictions, rampant homelessness, an escalating drive to privatize public services, and slave-labor conditions at Uber, Amazon, and other corporations.

The rise of fascism is part and parcel of the US war drive. The toxic stew of racism, xenophobia, homophobia, Islamophobia, sexism, anti-Semitism, and immigrant bashing which has led American democracy to the brink has been produced by the polices of the Democrats and Republicans. Billionaires like Musk, Bezos, Ellison, and Buffett are driving working people to the wall, and their union busting tactics are allowed by the Democrats and Republicans alike. Some are also pushing for a fascist coup and they will use Twitter and their wealth to push their agenda. We need a united front against war, union busting, and fascism, and a democratic workers party that can lead the struggle against fascism and war.
There is no anti-war opposition in the American government or the labor bureaucracies: The AFL-CIO “Solidarity Center,” funded by $75 million from the National Endowment for Democracy (NED), has pushed the privatization of the wealth in Ukraine for US capitalists and supports the war drive. Last week, a tepid letter by the so-called “Congressional Progressive Caucus,” meekly calling for talks between NATO and Russia, was withdrawn a day after it was issued, under pressure from the Democratic Party establishment.

The American ruling class is driving the world to the brink of a nuclear conflagration and playing with the lives of billions of people. Only the working people of the world, organized in a mass anti-war movement, can stop them.

On December 2, 2022, the Si Cobas union is launching a national strike against NATO and US war in Ukraine and Europe.
http://sicobas.org/2022/10/12/italy-the-december-2-general-strike-up-with-wages-and-welfare-down-with-war-war-economy-and-war-governments/
We will join them in this global struggle to stop the wars abroad and at home.

Initiated by United Front Committee for a Labor Party
UFCLP.org
info [at] uclp.org

THE DECEMBER 2 GENERAL STRIKE IN ITALY

Up with wages and welfare!

Down with the war, war economy and war governments!

The assembly of hundreds of combative workers held in Bologna on September 18 has agreed on the need for a strong mobilization in the fall, against the worsening of living conditions and the raging of war in Europe, no matter which would be the outcome of the parliamentary election in the following Sunday, and the next Italian government. Together with other rank-and-file unions, SI Cobas has called a general strike on December 2nd and will organize a rally in Rome before the government palaces on the following day.

In the path to the 2nd and 3rd of December, we are also participating in:

- Oct. 16: national conference on the war in Ukraine in Rome.
- Oct. 22: demonstration in Bologna and launching conference of the "National Safe Work Network" in Florence.
- Nov. 5: demonstration in Naples, with the 7 November Unemployed association and GKN dismissed workers.
The soaring prices of energy and basic necessities, which are causing a cut in the purchasing power of wages and salaries as we have never seen in the last 70 years, the tightening repression and criminalization of strikes are the poisoned by-product of the bloody proxy war being fought between the NATO and Russia’s imperialist poles on Ukrainian soil, and with Ukrainian and Russian cannon fodder; as the capitalist crisis progresses, it is producing more and more famines, epidemics, catastrophes and military tensions every day. Also European countries are both belligerent and untold targets in this war, where the US is striving to disconnect them from Russia’s energy resources, burdening these competitors with higher energy prices while tying them to the Atlantic bond. In Ukraine as in Russia, the war is used to impose harsher exploitation and clamp down on any forms of resistance and struggles.

The climate crisis, the result of decades of plundering of natural resources in the name of profit, as well as the health crisis (Covid 19, although removed by the media and institutional politics, keeps claiming victims by the day and causing medium- and long-term damage) further fuel the thrust toward global chaos and barbarism.

In this dramatic context Italy’s elections have resulted in a majority of seats to the right-wing coalition in Parliament, and a party with Fascist descendance, the Brothers of Italy, in the position to lead the government, even though voted by less than one out of seven electors. But abstentions and non-votes, with a +9% outnumber the sum of the Right coalition and the Democratic party (placed second), which says a lot about the dissatisfaction and disappointment of a majority of workers with the parties that have alternated in governments since the previous elections (all except Brothers of Italy...).

Four years ago we stopped work and took to the streets against Salvini's infamous Security Decree with its load of racist and anti-worker hatred. In the coming months workers will be called to mobilization to counter and stop a new wave of poison against immigrant workers, against women (starting with a new, furious attack on the right to abortion) and, more generally, against all the oppressed , with the attack on indirect wages and on the paltry social safety nets for the unemployed (above all the vicious campaign waged by the bosses, the media and a wide parliamentary spectrum against the “citizenship income”), and the extension the flat tax for non-wage earners by the reactionary, nationalist and obscurantist right. They want to divide the working class by origin, race, sex, employment. We will struggle to unite it!

The probable advent of a right-wing government, however, will not significantly change the direction taken in recent decades by all bourgeois governments, as left-of-center ones have been even more active than right-of-center governments in demolishing workers’ achievements won through hard-fought struggles in the early Seventies, and attacking militant worker struggles with police and criminal charges. Most recently Draghi's governissimo has been governing for the past year in the name and on behalf of big capital and against the workers, with the support of 90 percent of the parliament with the open and shameful complicity of the CGIL-CISL-UIL. This is why the DP has been abandoned by workers and has become the party of rich city quarters.

The history of a century and a half of the labor movement shows that the struggle, and certainly not the vote, is the only tool the exploited have at their disposal to make their case. With the December 2 general strike we show the millions of disappointed and discontented workers who have deserted the polls or voted for the lesser evil that they can take their destiny into their hands by joining the struggle. We will do our best to awaken the slumbering giant, starting from the few vanguard sectors.

Our fight is not only for higher wages to keep up with inflation, for worthy unemployment benefits, fewer working hours in order to work all, work less, for better and free healthcare and education and women’s equality and rights. We need to oppose this war, and our government’s participating in it with sanctions that are worsening the life of Russian as well as Italian people, with arms deliveries that are used in the butchery for the partition of Ukrainian resources on behalf of Italy’s and NATO’s bosses, as well as against rearmament unleashed by governments all over Europe and elsewhere.

Workers in Italy as around the world should not support their exploiters nor their exploiters’ enemies, but join together in an international workers’ front to wage a war on war, and overthrow the warmonger rule of capital, West as well as East.

Workers of the world, unite!

END_OF_DOCUMENT_TOKEN_TO_BE_REPLACED
Added to the calendar on Tue, Nov 1, 2022 11:02PM
§US Concerned About Russian Crimes While Covering Up It's Crimes
by United Front Committee For A Labor Party 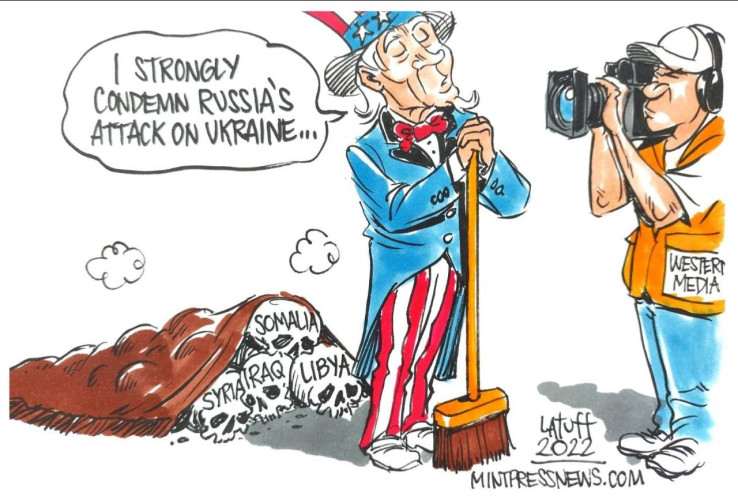 original image (1280x867)
The US government while attacking the crimes in Ukraine is has been covering up it's own war crimes since the 1898 invasion of Puerto Rico, the Philippine and Cuba.
END_OF_DOCUMENT_TOKEN_TO_BE_REPLACED
§Profiting For War
by United Front Committee For A Labor Party 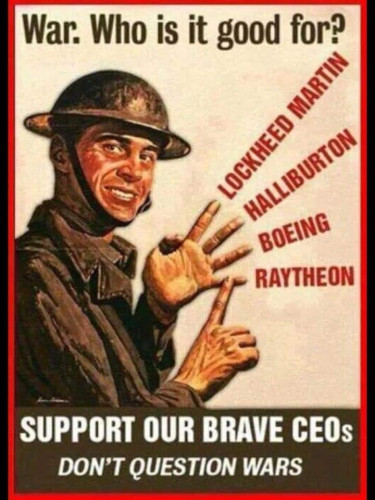 original image (720x960)
The US military industrial complex have massively benefited from the wars in Ukraine around the world.
END_OF_DOCUMENT_TOKEN_TO_BE_REPLACED
Add Your Comments
Latest Comments
Listed below are the latest comments about this post.
These comments are submitted anonymously by website visitors.
TITLE
AUTHOR
DATE
Correction of Address For US Federal Building 90 7th St. SF
UFCLP
Support Independent Media
We are 100% volunteer and depend on your participation to sustain our efforts!