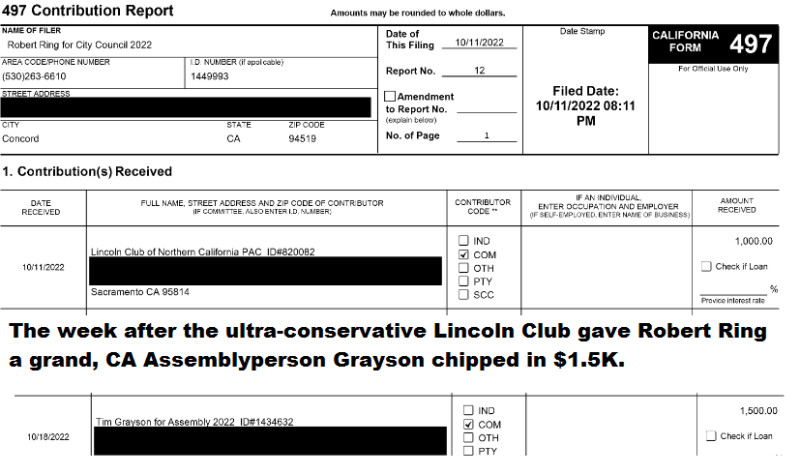 original image (827x490)
The Lincoln Club is a prominent ultra-conservative political donation network here in California. Aside from supporting California candidates, they also backed Trump's 2016 and 2020 campaigns. Trump associate Sean Spicer was the guest speaker at The Lincoln Club's 2022 annual dinner. A southern California chapter has endorsed Proud Boy affiliated candidates for Huntington Beach city council. The northern California chapter is officially endorsing Robert Ring for Concord city council. On October 11th, they sent him a gift of one-thousand dollars. This is the candidate who had previously received money from the Christian nationalist organization The American Council, a PAC organized through Destiny Church of Rocklin.

Exactly one week after the donation from The Lincoln Club, on October 18th Robert Ring received a donation from Pastor of Life Point Church East Bay and Assembly-person Tim Grayson. Grayson fully endorses the candidate. Grayson has also taken a photo with Robert Ring for the candidate's campaign Facebook page. Grayson is technically a Democrat, but seems enthralled by Robert Ring. Grayson was once a Republican and appears to be politically headed back to that direction.

Along with the Proud Boy enthusiasts at The Lincoln Club, and Christian nationalists at The American Council, Ring also has the support of the Concord Police Officer's Association. (Quelle suprise!) Earlier this month, Robert Ring and CPOA leadership took a photo with a rather large Blue Lives Matter flag for Ring's campaign Facebook page. The CPOA gave Ring $1,500 in September. Ring is registered with the 2022 Cops Voter Guide.

The council race for Concord's district 1 shouldn't be overlooked. This is a consequential election. Ring has enlisted the services of the KAL Group and Para Bellum Public Affiars. These are two major consulting groups that advise Republican candidates. Ring has the support of the California Real Estate Political Action Committee. The Hall family (right-wing real estate moguls in Contra Costa County) have made multiple donations to the candidate, as have other wealthy donors. Money is pouring in to help this ultra-conservative backed candidate.