by Ramon du Houx
Hundreds of CA elected officials thank Newsom for his leadership proposing a windfall tax on oil companies to stem price gouging and the climate crisis. 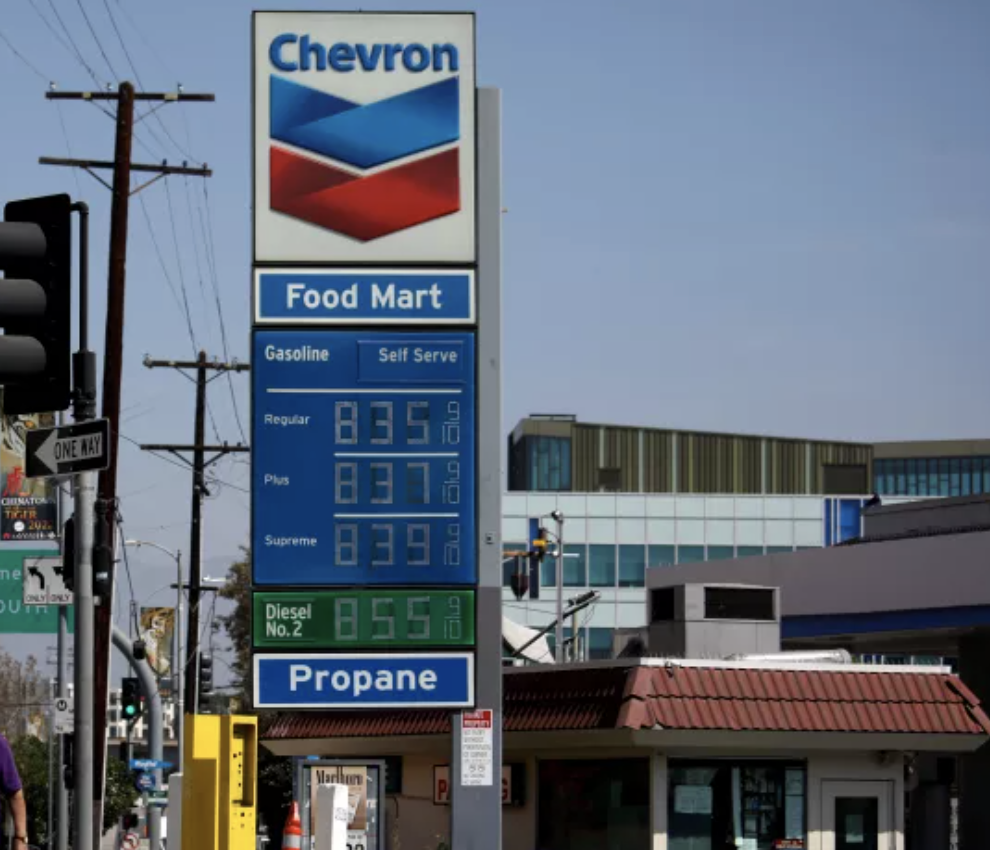 At one gas station in CA prices went over $8 a gallon. Governor Newsom is calling for a special session of the legislature to enact a windfall tax on oil companies that are "fleecing" customers, as he put it.

The unprecedented rise in gasoline prices led Governor Gavin Newsom to announce his plan to enact a new windfall profits tax on oil companies. Last week, he called for the Legislature to convene a special session to get it done. He said oil companies need to provide an explanation as to why gas prices are so high and should be held responsible for “fleecing” customers.

The governor’s proposal means that companies engaged in extraction, production, and refining of oil will pay a higher tax rate on their earnings above a set amount each year, and these recouped windfall profits will then be directed to rebates and or refunds  to California taxpayers impacted by high gas prices.

“The audacity of the oil industry raising prices at the gas pump when crude was dropping in value is unconscionable. EOPA California, representing over 440 elected officials from 49 counties, strongly support Governor Newsom and his proposal for a windfall profit tax on the oil industry. We must protect consumers from price gouging. We urge Legislative leaders to convene a special session to bring justice and security to the people of California, and enact a windfall profit tax,” said Dominic Frongillo, Executive Director and Co-Founder of Elected Officials to Protect America (EOPA). “Too many people have been forced to cut back on necessities just to fill their tank for their working commute. This issue highlights the absolute necessity to become energy independent from fossil fuels. People shouldn’t needlessly suffer from oil price fluctuations, and deadly greenhouse gas emissions. The transition to a 100 percent clean energy economy must be accelerated for our national security.”

Oil companies have failed to provide an explanation for the divergence between prices in California compared to the national average. Industry spokespeople blame it on five refineries temporarily shutting down at the same time. But this has happened in the past without prices at the pump skyrocketing anywhere near this degree. In September 2019, five refineries experienced unplanned maintenance issues, and California was faced with several refinery outages. The price spike was a mere 34 cents — a fraction of what Californians have been paying.

“Refinery pre-scheduled maintenance is not a credible explanation for the sudden $1.54 increase in what refineries charge for every gallon of gas Californians buy,” said Igor Tregub, a Ukraine native and EOPA California Leadership Council member with a civilian national security background who chairs the California Democratic Party Environmental Caucus and was previously an elected Berkeley Rent Stabilization Board Member, with a civilian national security background. “Furthermore, the nerve of the oil companies using the war in my homeland to make exorbitant profits is inhumane. The people of Ukraine would not be suffering if Europe wasn’t dependent on Russian gas. The people of California wouldn’t be deciding what supplies not to buy because they have to fill up their gas tanks to get to work. For our security and the world’s, we need energy independence from fossil fuels. First, let’s ensure the windfall profit tax on oil companies happens. The legislature must see this a national security issue and hold a special session to get it done.”

“Families have been forced to cut back on spending and rethink their budgets. I thank Governor Newsom for standing up for Californians who are being taken advantage of at the gas pump by a cartel of oil refiners. It's apparent that this situation is the consequence of the five big oil refiners in California who make 97 percent of the gasoline — controlling the supply to artificially drive-up prices. A windfall profits tax solution that takes excessive profits out of the hands of oil corporations and puts money back into the hands of consumers surely deserves a special session,” said Eduardo Martinez, Richmond Vice Mayor, EOPA California Leadership Council. “We live in the shadow of these refineries that spew toxic pollution into the air we breathe on a daily basis. People I represent have died prematurely because of our zip code’s dirty air. Now those same companies are stealing from the people of California.”

On September 28, Governor Newsom directed the California Air Resources Board (CARB) to take immediate action to increase the state’s gasoline supply and bring down fuel prices by allowing oil refineries to make an early transition to winter-blend gasoline. In 2012 when this action was taken California gas prices declined by $0.25/gallon within 13 days, and $0.47/gallon after 20 days.

Shortly afterwards, OPEC, the world’s leading oil producers, announced that they will cut production by 2 million barrels per day, The California Energy Commission said the OPEC decision is equivalent to about a 1 percent cut in supply, and expected to have a “relatively modest impact on the price of gasoline in California.”

“Putin’s war in Ukraine and OPEC’s limiting of the oil supply cannot account for the increase in the price of gasoline here in California when across the rest of the country prices have dropped. Consumer Watchdog research shows that the gap between the average price per gallon at the pump in California and what consumers pay in the rest of the United States is close to $3. In the second quarter of 2022 alone, California’s five largest refiners — Chevron, Marathon, PBF Energy Phillips 66 and Valero — made $26 billion selling fossil fuels, virtually doubling profits from the year before. These are the same refineries that have caused physical and financial harm to residents from ongoing illnesses like asthma, cancer, miscarriages and premature deaths, particularly among Angelenos," said Paul Koretz, LA City Councilmember, former Assemblyman, EOPA California Leadership Council. "It’s high time the people of California see relief from this price gouging. I commend Gov. Newsom’s plan for a windfall tax on oil companies and urge the legislature to act now. This is just the latest of countless incidents underlining the urgency for California to become energy independent from fossil fuels.”

The CEC Chair David Hochschild sent a letter to industry executives demanding immediate and comprehensive explanations for this inexplicable, unprecedented spike in gas prices during the beginning of October. In it he said their explanation must address the fact that there haven’t been any new state costs or regulations, that planned and unplanned maintenance typically does not result in large increases like this, and crude oil prices are down.

Another oil industry claim is that the gouge gap is due to California’s environmental taxes and fees, but that simply is not true.  A Consumer Watchdog’s report, Taxing Oil Refiners’ Windfall Profits: How To Get Back What Californians Overpay At The Pump, explains that those taxes and fees make up only 69 cents per gallon of gas.

The situation is clear, now it’s time for the legislature to act.

There has been activity from the oil industry which the Legislature has questioned in the recent past. That’s why this year the California Oil Refinery Cost Disclosure Act, SB 1322, became law and means that refiners must start reporting their profits per gallon of gas monthly starting in 2023.

END_OF_DOCUMENT_TOKEN_TO_BE_REPLACED
Add Your Comments
Support Independent Media
We are 100% volunteer and depend on your participation to sustain our efforts!