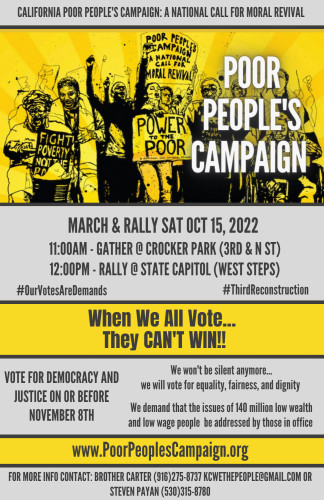 Join the California Poor People’s Campaign march in Sacramento as part of the nationally coordinated day of action on main streets of capital cities across the country to encourage poor and low-income people and low-propensity voters to not only register but also cast their ballots.

Gather at Crocker Park starting at 10:30am, The California PPC march will begin at 11am at Crocker Park, 3rd & N St, and end at the California State Capitol Building, (about 1 mile) with a rally at 12 noon. The rally with feature people impacted by racism and poverty who will describe why voting matters for people who are poor and how we can vote for democracy and justice.

Speakers will emphasize that their votes are not support but instead, they are demands that the issues of poor and no and low-income people and low-wage workers are at the center of our national narrative.

The Poor People’s Campaign: A National Call for Moral Revival is uniting people across the country and GOTV of poor and low-income people to challenge the evils of systemic racism, poverty, the war economy, ecological devastation and the nation’s distorted moral narrative
of religious nationalism.

For the 2022 midterm elections, the Poor People's Campaign is striving to reach out to 5 million poor and low-wage people and low-propensity voters encouraging them to vote based on policy demands and then follow through by making sure their candidates support policies that protect democracy and justice for poor and low-wage people. For more information, go to https://www.breachrepairers.org/press-releases/poor-peoples-campaign-plans-outreach-to-5m-low-income-voters

Added to the calendar on Tue, Oct 11, 2022 6:10PM
Add Your Comments
Support Independent Media
We are 100% volunteer and depend on your participation to sustain our efforts!