Rent Strike: Solidarity and Repression at Renew on Merritt

by Tenant and Neighborhood Councils (TANC) (comms [at] baytanc.com)
The Renew on Merritt Tenant Council formed in June, 2022 and began organizing with Tenant and Neighborhood Councils (TANC) to demand repairs and lower rent from landlord Kennedy Wilson. In August, Kennedy Wilson sold the building to FPA Multifamily, and the tenants launched a rent strike. The cops and the armed guards arrived a few weeks later. Why? 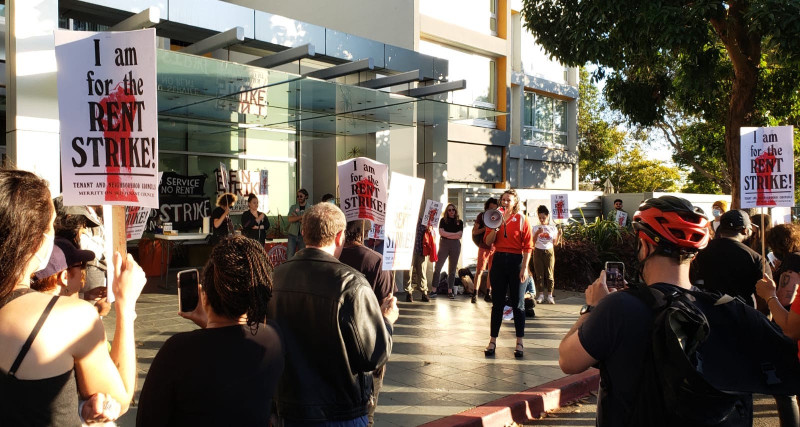 Organizing an autonomous tenant union rally is a lot like running a DIY show. There’s the hurry-up-and-wait, where you rush to the spot by your posted time, knowing everyone else is some ways behind. There’s five people, and maybe no one else is coming. Then there’s fifty…

On Tues., Aug. 30, council members and the broader TANC membership rallied together at Merritt on 3rd to launch a major rent strike against FPA Multifamily/Trinity Property Consultants.

As we’ve learned over months of organizing, not everyone in the building has the same problems. The rats are endemic, crawling around as high as the 11th floor. And up from there you find mold, the stench of busted trash chutes, and a few units with nothing wrong — yet.

The rent strike, though, means tenants new and old, friends and strangers, with more and less black mold and income, recognizing their power against the landlord rests with collective action.

The paint was still wet as the banners went up. One of them, taped to the front office over management’s shrill complaints, read, “TENANTS ON STRIKE: For Repairs and Lower Rent.”

Another, hanging from a window above us, was even more direct: “DON’T PAY RENT.”

E stepped up to emcee at the last minute and led us in chants between speeches from council members Ali and Monty. Casey, from the Alice-Ivy Hill Tenant Council, which recently withheld some $650,000 in a 13-month rent strike, winning significant concessions, took the bullhorn last.

At the end, we counted up to the number of confirmed striking units — 43. And then council members scrawled “rent strike” on empty envelopes, taping them to the management’s office.

Tenants took the banners and picket signs for their doors and windows. In the elevator, someone asked a rent striker if she was scared. “No,” she said. “It’s been a long time coming.”

New Landlord, Same as the Last, Only Worse

In 2012, the $23 billion real-estate investor Kennedy Wilson paid $31 million for the 180-unit apartment complex at 1130 3rd Avenue. At the time, the company indicated its intent to use buyouts and constructive evictions to reduce the 1975 building’s longtime rent-controlled units.

Kennedy Wilson left tenants to suffer the deferred maintenance as its property value rose. In August, as the tenant council raised their demands and strategized the rent strike, Kennedy Wilson offloaded the building onto another corporate landlord, FPA Multifamily, for $55.5 million.

FPA Multifamily and its management arm, Trinity Property Consultants, set about rebranding Merritt on 3rd as “Renew on Merritt,” resuming Kennedy Wilson’s approach around superficial renovations. The conditions that spurred the organizing, however, remained unaddressed.

So the tenants, now organizing as Renew on Merritt Tenant Council (RoM), reasserted their demands to FPA Multifamily, pronouncing their intention to strike pending repairs and lower rent.

Three weeks into the rent strike, instead of negotiating in good faith, FPA Multifamily/Trinity dramatically escalated its harassment and intimidation efforts against the RoM council.

On Weds., Sept. 21, a council member approached an on-site manager to complain about harassment of his partner and children. Management called the cops and the tenant was arrested on a baseless charge. FPA Multifamily/Trinity issued the family an eviction notice.

Immediately after the arrest, in what was widely understood as a threat, FPA Multifamily/Trinity issued all tenants a notice demanding rent paid in full, and dispatched “inspectors” flanked by armed guards in tactical gear to aggressively doorknock tenants, demanding entry to their units.

The arrest was clearly a retaliatory measure in a broad harassment campaign against organized tenants exercising their rights, and an attempt to exploit loopholes in local eviction restrictions.

The council and TANC mobilized to monitor the cops and guards on-site and connect the arrested tenant with bail and other legal resources regarding the eviction and criminal charge.

By Friday, we issued a press release, a letter to the district attorney, and a cease-and-desist letter to the landlord demanding an end to the harassment, rescission of the eviction notice, and no charges stemming from the arrest. We also organized a phone zap to amplify the demands.

TANC and RoM council members joined the arrested tenant and his family for a court appearance on Monday, and plan to attend his next date, Oct. 26. He faces possible jail time.

The landlord’s one and only motivation is rent (not “providing housing.”) Because tenants don't own our own housing, we’re expected to pay. The only other options for working-class people are living on the streets, in prison-like shelters and encampments, or else in actual prisons.

Houselessness, carceral housing, and imprisonment are how landlords collaborate with the state to discipline and oppress working-class tenants, and also to perpetuate racism. Landlords and cops use rent to restrict access to privately-owned housing to the whitest and wealthiest.

When the capitalist housing system is working as it’s intended, individual tenants who do not pay rent face eviction by court order, and the eviction is executed by county cops — the sheriff.

So why did FPA Multifamily/Trinity work with cops and guards this month to arrest, threaten, intimidate, and harass our members and comrades in the Renew on Merritt Tenant Council?

Because the rent strike breaches the usual, cruel relationship between tenants and landlords, and points to the possibility of a world without rent, which requires the end of police and prisons.

Because organized tenants develop the power not only to trim landlord profits, but also to eventually end the state-backed violence of rent that stands in the way of finally feeling at home.

And because FPA Multifamily/Trinity is worried they’ll have to meet the tenants’ demands.

END_OF_DOCUMENT_TOKEN_TO_BE_REPLACED
Add Your Comments
Support Independent Media
We are 100% volunteer and depend on your participation to sustain our efforts!