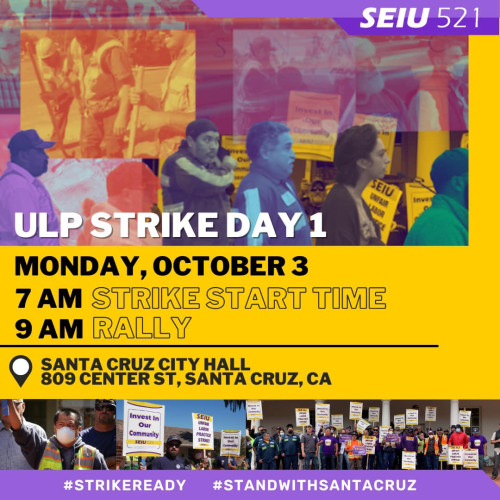 original image (1080x1080)
“Santa Cruz residents are facing a strike because the City Council has enabled management to engage in unfair labor practices while trying to force its lowest paid to accept raises far below what it has offered top executives,” said Ken Bare, Santa Cruz City Chapter President.

The following statements were provided during the press conference in front of City Hall:

“Right now, the workers that sanitize and process your water, pick up your trash, support your libraries and keep our parks safe are burning out because we need staffing support,” said David Tannaci, SEIU 521 member and Engineer Tech with the Water Department. “I join with 95% of my co-workers who voted to reject the City’s last offer and authorize our bargaining team to call for an unfair labor practice strike if necessary to resolve the issues essential City workers face.”

“I join with hundreds of my SEIU 521 colleagues in rejecting the City’s last offer and voted to strike over unfair labor practices,” said Gabriela Salinas-Holz, Parking Control Tech and SEIU 521 member. “We came out in mass numbers to express our discontent and continued concern with the City’s dismissal of the staffing impacting all of our departments.”

Service Employees International Union, Local 521 represents 60,000 public-and nonprofit, private-sector workers in California’s Bay Area, the Central Coast, and the Central Valley. Under a Community First vision, we are committed to making sure the needs of our community, and the vital services we provide our community, come first. We believe our communities thrive when residents, leaders, and workers recognize that we are all in this together when it comes to our safety, health, and well-being.
END_OF_DOCUMENT_TOKEN_TO_BE_REPLACED
§
by Strike! 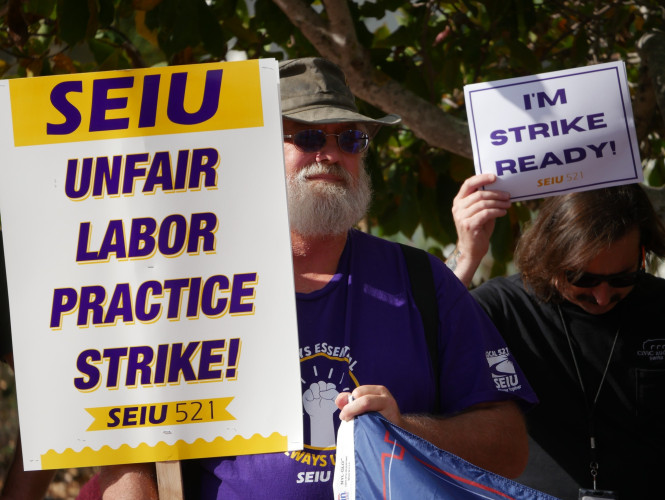 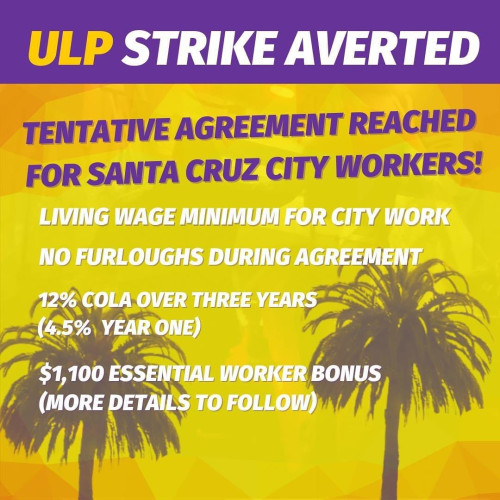 original image (1080x1080)
The new three-year agreement is highlighted by a no furloughs clause during the term of the deal, a one-time essential worker bonus of $1,100 as well as raises totaling 12%, with 4.5% in the first year.

The city made a commitment of no furloughs during the term of the deal and puts focus on commitments by both parties to explore wage and classification improvements and investments that reduce turnover. The deal also works to improve retention by making essential worker wages comparable to surrounding cities and employers.

“We are proud to have stood resilient and united throughout these negotiations, this TA includes many firsts for our workers, especially the majority of us who have faced furloughs,” said Ken Bare, SEIU Local 521 Chapter President. The City’s last best and final offer our members rejected did not include the furlough commitment nor the bonus victory. This agreement allows us to begin to rebuild the long-standing partnership between management and our workforce to ensure the City of Santa Cruz is a better place to live and work.”
Add Your Comments
Support Independent Media
We are 100% volunteer and depend on your participation to sustain our efforts!