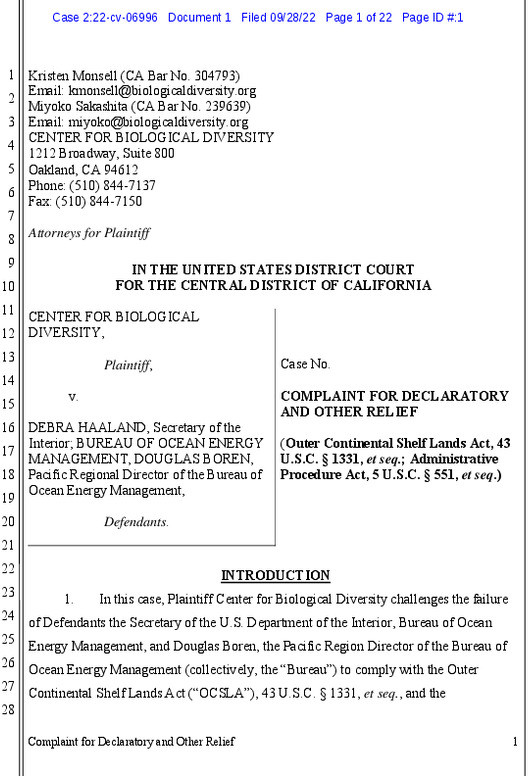 Today’s filing notes that BOEM has allowed Platform Elly and other rigs in the Beta oilfield to continue to operate while relying on drilling and safety plans that were written and approved in the 1970s and ‘80s.

“These outdated plans don’t account for the rapidly aging oil industry infrastructure off California’s coast,” said Kristen Monsell, legal director of the Center’s Oceans program. “With these decaying rigs out there, we’re rolling the dice every day. Our coastal communities and wildlife can’t afford to wait for the next disastrous oil spill while the federal government does nothing. It’s time to get these rusty relics out of our ocean.”

The spill last October was one of the largest in California in recent years, releasing thousands of gallons of oil into the Pacific Ocean and covering more than 8,000 acres. Beaches were closed for days, and the oil killed and injured thousands of birds and other marine wildlife and led to expensive clean-up efforts. The source was a damaged pipeline connecting Platform Elly to Long Beach.

Under the Outer Continental Shelf Lands Act BOEM has a duty to review and revise drilling plans based on new information or changes in operations. The goal of the requirement is to ensure offshore drilling operations do not cause serious harm to the environment or life (including wildlife), or compromise national security.

The Beta field’s platforms were scheduled to be decommissioned more than a decade ago, but drilling has continued. Despite the discovery of a slew of new relevant information -- including safety violations, advanced oil spill risk analysis, and an increase of vessel traffic in the area -- federal regulators have not required updated versions of the plans.

“Too much is at stake for Biden officials to ignore these ticking time bombs any longer,” Monsell said. “As long as offshore drilling is going on in the Beta field, the next oil spill is a matter of when, not if, and we’ve already seen the terrible consequences. Our marine wildlife and beachgoers deserve to see these rigs taken out.”

The lawsuit was filed in the U.S. District Court for the Central District of California.


https://biologicaldiversity.org/w/news/press-releases/lawsuit-challenges-outdate-ca-oil-plans-9-28-22-2022-09-28/
END_OF_DOCUMENT_TOKEN_TO_BE_REPLACED
Add Your Comments
Support Independent Media
We are 100% volunteer and depend on your participation to sustain our efforts!