by Safe Ag Safe Schools (yanely [at] pesticidereform.org)
Concerned about the use of the cancer-causing drift-prone pesticide 1,3-dichloropropene (1,3-D), more than 50 pesticide reform advocates, including farmworkers, health professionals, teachers, and their allies held a news conference and rally at the Monterey County Government Center on Tuesday, September 27th – the 60th anniversary of the publication of Rachel Carson’s Silent Spring. The group, organized by Safe Ag Safe Schools and the Monterey Bay Central Labor Council, called on the County Ag Commissioner to reduce 1,3-D use and web-post warnings.
The news conference can be seen in its entirety at: https://www.facebook.com/safeagsafeschools/videos/1837889659884290

Salinas. Concerned about the use of the cancer-causing drift-prone pesticide 1,3-dichloropropene, more than 50 pesticide reform advocates, including farmworkers, health professionals, teachers, and their allies held a news conference and rally at the Monterey County Government Center at 11 a.m. on Tuesday, September 27th – the 60th anniversary of the publication of Rachel Carson’s Silent Spring. The event was organized by Safe Ag Safe Schools and the Monterey Bay Central Labor Council.

The news conference can be seen in its entirety at: https://www.facebook.com/safeagsafeschools/videos/1837889659884290

Yajaira Garcia, founder of the youth-led civic engagement group Pueblo and Greenfield resident began the news conference by reading from a section of Carson’s Silent Spring, noting that the dynamics of power and secrecy regarding pesticide pesticides are similar 60 years later:

“There is still very limited awareness of the nature of the threat. This is an era of specialists, each of whom sees his own problem and is unaware of or intolerant of the larger frame into which it fits. It is also an era dominated by industry, in which the right to make a dollar at whatever cost is seldom challenged. When the public protests, confronted with some obvious evidence of damaging results of pesticide applications, it is fed little tranquillizing pills of half truth. We urgently need an end to these false assurances, to the sugar coating of unpalatable facts. It is the public that is being asked to assume the risks the insect controllers calculate. The public must decide whether it wishes to continue on the current road, and it can do so only when in full possession of the facts.” Rachel Carson, Silent Spring (1962)

The pesticide 1,3-dichloropropene or 1,3-D was first registered in the US in 1954 (California, 1970) as a soil fumigant used to control nematodes. It has been manufactured by Dow Chemical (renamed Corteva, today) under the brand Telone II. 1,3-D is a colorless to straw-colored liquid with a sharp, sweet, irritating odor. It is a drift-prone fumigant pesticide used to kill organisms in the soil prior to planting, applied mostly on strawberry and grape fields in Monterey County. 1,3-D was the 4th most heavily used pesticide in Monterey County in 2019 with over half a million (583,994) pounds applied and concentrated in the Pajaro and Salinas Valleys.

The fumigant is Injected into the ground or applied by drip lines and typically—but not always--covered with tarps on the coast. 1,3-D drifts initially from wind and later from volatilization for many miles at health-harming concentrations. The pesticide may also get into our water supply, as did a previous version of Telone discontinued in the late 1980s, which contained the carcinogen 1,2,3-TCP that persists in some California water systems to this day.

What are the health risks associated with 1,3-D?

Acute harms include immediate exposure symptoms from high air levels due to drift: irritation of skin and nose, as well as possible slow weight gain in infants. Very high exposure to 1,3-D, such as a spill, can cause nausea, vomiting, headache, depression and damage to liver, intestines, and bladder, and difficulty breathing.
The long-term health threats from chronic exposure to even tiny amounts of 1,3-D over time can cause cancer, damage to the lining of the nose, and may pollute groundwater. 1,3-D is listed as a Prop 65 carcinogen and a Toxic Air Contaminant by the State of California.

1,3-D is banned in 34 countries, but not in the US. The pesticide was prohibited in California between 1990 and 1995 after high air concentration levels were recorded in the Central Valley.

“We always hear that California has the strictest pesticide regulations in the country, but the problem is that the US is far behind other countries in protecting its farmworker communities,” said Oscar Ramos, a Sherwood Elementary School teacher in Salinas. “If 34 countries have figured out how to grow berries and grapes without cancer-causing 1,3-D, we can certainly do it here, too. Why we don’t is a crime.”

Is 1,3-D a cancer threat to Monterey County workers and residents?

Yes, according to the “safe harbor level” or “no significant risk level” issued by the California Office of Environmental Health Hazards Assessment (OEHHA) last July. The new lifetime cancer risk warning level for 1,3-D is equivalent to an air concentration of 0.04 parts per billion (ppb). The 1,3-D air concentration at the state pesticide air-monitor located on the grounds of Ohlone Elementary School in North Monterey County has exceeded OEHHA’s safe harbor level for cancer every year since testing started in 2012, averaging 0.10 ppb – 2.5 times higher than the safe level. While the Ohlone testing site is one of only six active in the state, previous air monitoring of 1,3-D at the Salinas airport and in Chualar also exceeded OEHHA’s lifetime cancer risk level.

Bobbie Joe Garcia, a youth and environmental justice activist, said, “As a young person from Greenfield, I have grown accustomed to my community being treated as insignificant by those in power. A clear example of this can be seen in how the county has ignored long-time concerns regarding the use of harmful pesticides, such as Telone, near our communities. Being a farm-working town, so many of our neighbors, friends, and families have had to deal directly with the exploitation of the Ag Industry; yet all of us are currently forced to contend with risks of long-term pesticide exposure, which too often have shown up in the sudden sickness and/or death of a loved one.”

What are our pesticide regulators doing to reduce 1,3-D use?

Nothing, so far. Monterey County Agricultural Commissioner Gonzales claimed in an August 19, 2022 letter to SASS that his office is relying on “regulatory target concentrations” based upon a 2015 “Risk Characterization Document” by the California Department of Pesticide Regulation (DPR), and ignored the new OEHHA safe harbor level that SASS brought to his attention. Commissioner Gonzales has given no indication that he will do anything differently this fumigation season, which runs July through November. DPR is under court order to release a new regulation for public review by November 9, 2022.

Several speakers echoed the demands of a July 21, 2022 letter to the Monterey and Santa Cruz County Ag Commissioners that organizer Yanely Martinez wrote on behalf of SASS:

We call on you to “not approve or stop” enough 1,3-dichloropropene applications to reduce air concentrations below 0.04 ppb, to protect the public from developing cancer …
In addition, with schools starting … we call on you to implement larger school buffer zones for 1,3-D than the currently required ¼-mile, as DPR has recorded 1,3-D air concentrations at the Shafter air monitor of 20 ppb generated from an application 7.5 miles away (on January 12, 2020) …
Finally, it is long past time to web-post Notices of Intent (NOIs) to apply restricted pesticides. This must be basic public health information for a chemical that our own state scientists indicate is underregulated and 34 countries of the world have banned. We call on you to web-post at least the 1,3-D NOIs immediately.

The Monterey Bay Central Labor Council (MBCLC) is the local body of the American Federation of Labor-Congress of Industrial Organizations (AFL-CIO). It is a membership organization serving as a coalition of the Labor Community in Monterey and Santa Cruz Counties. Over 80 unions are affiliated with the MBCLC, representing more than 37,000 union members and their families. The mission of the MBCLC is to improve the lives of workers, their families, and our community – to bring economic justice to the workplace and social justice to the nation. 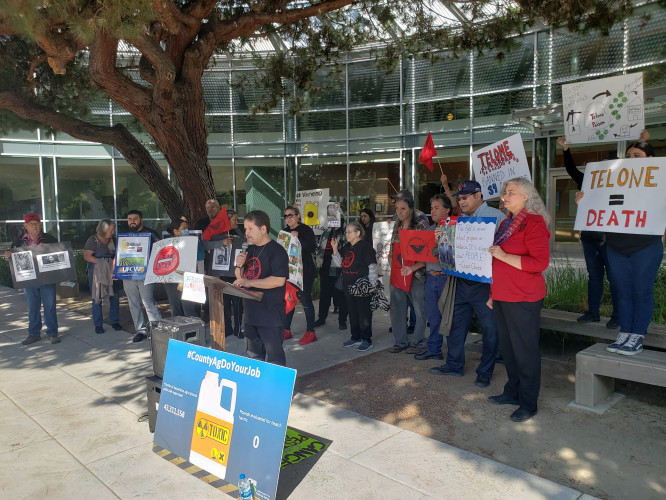 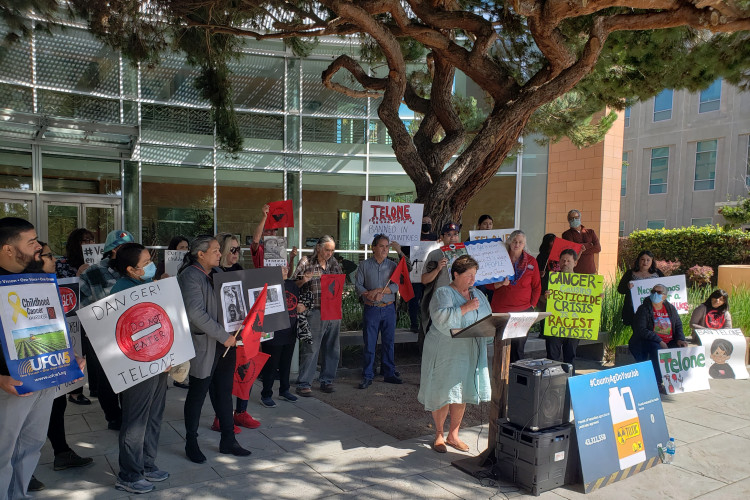 Download PDF (94.2KB)
The lifetime cancer risk "safe harbor level" is 0.04 ppb. That level has been exceeded wherever tested in Monterey County.
END_OF_DOCUMENT_TOKEN_TO_BE_REPLACED
Add Your Comments
Support Independent Media
We are 100% volunteer and depend on your participation to sustain our efforts!