Santa Cruz Dismantles Camp of Hundreds of the Houseless

by People's Tribune (peoplestribune [at] gmail.com)
The City of Santa Cruz, CA, in a county with the second highest rent in the country, is evicting an estimated 300 people living in wall-to-wall tents running along a riverbed right next to this largely wealthy city’s downtown. The camp, in existence for about three years, was sanctioned by the City; houseless people were directed to go there because the City didn’t have enough beds. Now, the City cites sanitation, drug use and complaints as reasons for closing the Benchlands camp. “This never needed to become a crisis for the hundreds of houseless people driven to the Benchlands by police and social service agencies. Officials had two years to set up sanitary camps that provided the dignity of showers, water and toilets, but failed to do so, even when provided with millions of dollars from the state and federal governments.” Hear the voices of the houseless about their side of the story in this article. 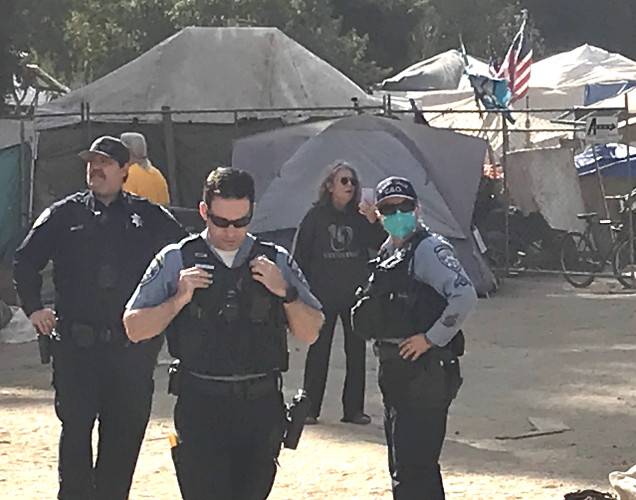 In a move called a “crime against humanity,” the city of Santa Cruz, CA is evicting an estimated 300 people living in wall-to-wall tents running along a riverbed right next to this largely wealthy city’s downtown. The City has divided the camp into sections separated by fences and is dismantling the camp one section at time. On the first day a young man was seen pulling his few possessions in a wheeled cart with a broken bike. A woman was dragging a large suitcase. Another woman was wrapping a scarf around her head without the convenience of a mirror, on her way to work.

Santa Cruz County, not far from the heart of Silicon Valley and its billionaires, has the second highest rent in the country. To rent housing, a $60 an hour full-time wage, amounting to three minimum wage jobs, is needed.

The camp, in existence for about three years, was sanctioned by the City. Houseless people were directed to go there because the City didn’t have enough beds. Now, the City cites sanitation issues, drug use and complaints from neighbors as reasons for closing the Benchlands camp. Keith McHenry of the Santa Cruz Homeless Union and Food Not Bombs says, “This never needed to become a crisis for the hundreds of houseless people driven to the Benchlands by police and social service agencies. Officials had two years to set up sanitary camps that provided the dignity of showers, water and toilets, but failed to do so, even when provided with millions of dollars from the state and federal governments.”

The City has said it promises every resident a bed, but residents say the actual number of people living at the camp is much higher than what the City claims, and that they don’t have enough beds for everyone. And, as one camp resident said, “They’re sending people to the (National Guard) Armory, but the Armory is way out. It’s nowhere near any type of resources we need.”

According to the Santa Cruz Sentinel, a city official acknowledged in August there are not enough shelter spaces for the city’s homeless population. Recently released results of the 2022 homeless point-in-time count state that approximately 2,299 people are homeless countywide, and an estimated 1,439 of them reside within the city of Santa Cruz’s borders.

Elise, an organizer with the Santa Cruz Homeless Union, said, “The city is offering land to developers who are not even from here, basically giving away our city lands, and they’re squirming out of providing any affordable housing.” She added: “How, in such a wealthy country, are we in this position still?…The homeless are getting to be so many, renters can barely afford rent, a lot of people have left Santa Cruz because they can’t afford to live here.”

In California, and across the country, the dismantling of homeless encampments goes hand in hand with efforts by media and public officials to paint homeless people as largely drug dealers or addicts, criminals, mentally ill, and people who just don’t want to work. However, many homeless people are working, though at low-wage jobs.

Houseless people are from all walks of life and have become homeless for a multitude reasons, including the economy, high rents, job loss, illnesses, abusive relationships, high tuition and fees, etc. Many who were never mentally ill develop mental health problems because of being homeless. Anyone can become homeless today. People who still have homes should be supporting housing as a human right. According to the U.S. Census Bureau 3.8 million more renters face eviction in October. The solution is not driving people out of camps into armories or into concentration camp-like facilities encircled with barbed wire. The solution is providing housing.

What is happening to the homeless is a harbinger of what faces millions more Americans if we, the people, don’t demand housing and services as a right for all. Government on every level has a responsibility and the resources to provide for and care for people. Tax dollars are instead helping big real estate developers who profit from the housing crisis they help create, and billions are going to the bloated military budget, which continues to increase.

The State of California in recent years has given billions of dollars to California cities to deal with homelessness — why hasn’t more of the money been spent on permanent housing instead of camps and shelters? Homeless people want homes, not tents. As a resident at the Benchlands camp said, “There’s plenty of resources to house and care for us all. Just look around at the wealth.”

VOICES FROM THE BENCHLANDS:
Below, residents and supporters at the Benchlands share their side of the story.

A supporter who was homeless for over seven years:
“To allow ourselves to be turned against the unhoused would be to turn kin into pariahs. ‘They’ are us. And we are one paycheck away from being they.
“To quote the immortal Frank Zappa:
‘It can’t happen here
It can happen anywhere m’dear
But it can’t happen here
‘Cause I been checkin’ it out
Hm-m-m
And it can’t happen
Here’”

“I was one of the first 10 in here, about three years ago. I came from North Central Pennsylvania; there, it ain’t nothing like here. I had a full-time job, paying $375 a month in rent. Everything was all paid except for phone bills; it takes a little extra, but that was easy. I had a studio. I have no idea where I’ll go now. They have to offer some alternative housing, that’s the law. I have to go to my job now.”
……

“They’re going to give hotel rooms for some, for some period of time, like they did before. But what they did before was they told the courts, oh, we gave these people hotel vouchers, right. They went to the motel, Santa Cruz Motel. And two days later they were kicked out and everybody was camping around the hotel. Right. So it wasn’t really like housing. It was just a ruse to get people out. So then some of our core organizers down here were told by [a city official], ‘if you go up to the Overlook right now, we’ll give you section eight vouchers. You’ll get into housing.’ Because it’s a way of pulling people that are strong advocates in the camp, out of the camp. They told single women down here, ‘Have you ever dealt with a SWAT team? Have you ever dealt with cops? That’s what’s going to happen in the next two days [if you don’t pack up]. They’re gonna show up right here.’”
Above: Several residents of the Benchlands camp who are facing eviction.
……
“They’re allowed to run you over. They don’t have compassion for disposable people. You’re allowed to feel the love, but the point is if you passively sit by, they’re going to bulldoze you over. It’s your human right to not be bulldozed. You’re not starting a war, a war is being thrust upon you. And now it’s on you to defend yourself. It’s your human right….you’re not hurting people, they are actually hurting, displacing you. And if you don’t do anything about it they are going to do it to you.”
……
“When they come in here to force us out the number one issue is gonna be transporting our belongings…because what happens is that they make us move in a hurry and then half of our belongings become garbage. And then they videotape and photograph it, and show it as proof of how we destroy the environment, they say that this is the trash we leave. We were forced to leave behind our personal belongings. And that needs to be documented.”
……
“I wish you heard the conversation I overheard. They said they calculated there were 350 or more people down here and that they only had 170 beds. But, the official statement is that there are 200 people down here and they have approximately 200 beds. So they skewed their numbers. They don’t care about us. And it’s not good for women. They are treated much worse than men here.”
……
“I know the stress to not have a shelter or a house. I’m willing to get arrested and also willing to stay here. If there are deaf individuals in this camp that speak sign language, I am currently studying to be an interpreter. I am more than willing to use the very little, but still moderate, skill I have to help.”
……
“I’ve lived all over the world and never seen a country that neglects its people so badly . . . I’ve seen incredible acts of kindness down here. I’ve also seen the incredible desperation that pushes people . . .” said a physical therapist who became gravely ill and lost everything. [View her story on video at https://peoplestribune.org/2022/08/this-could-happen-to-anyone/]
……
“It would be nice if you would help us but you just complain about us, and you in your billion dollar house. Those trees around your house, you guys don’t care about them or anybody, but we respect the elements. The elements aren’t respected anymore. We’re trying to control them. Like we got this whole thing now with Elon Musk, but he’s going to mess up the earth. We pretty much all can have what we need. There’s plenty for everybody. Like, why don’t we share? ..”
……
From a Facebook post by Keith McHenry:
“The governments in Santa Cruz are forcing over 300 people into the doorways and river banks of downtown which I would think the business community won’t be happy about. The doorways are already occupied most nights and another 3.8 million American families say they expect to be evicted this October. The city and county had two years and millions of dollars to organize a safe place for people to live but didn’t. Where did the hundreds of millions of dollars go? Please ask them why they think moving hundreds of people into the doorways and river banks of downtown is a solution to the ever-growing crisis: mhuffaker [at] cityofsantacruz.com, Robert.Ratner [at] santacruzcounty.us”
.....
The People’s Tribune is a voice for the millions of everyday people who are fighting to survive in an America in crisis. The paper helps build connections among the fighters and the awareness that together we can create a new society that cares for us all. Send your story to the People’s Tribune. Leave at http://www.peoplestribune.org, e-mail peoplestribune [at] gmail.com or call 773-486-3551.
Please credit the source when sharing. ©2022 peoplestribune.org. Please donate at peoplestribune.org to help us keep bringing you voices of the movement. We’re all volunteer, no paid staff.


END_OF_DOCUMENT_TOKEN_TO_BE_REPLACED
§View from one end of the nearly mile-long Benchlands camp.
by People's Tribune 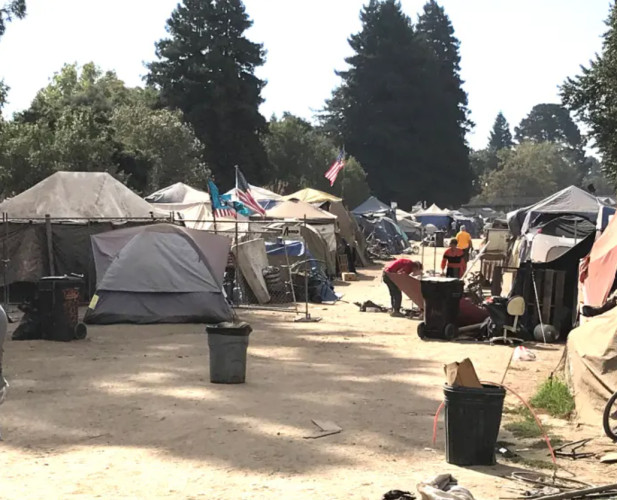 original image (1030x834)
View from one end of the nearly mile-long Benchlands camp.
END_OF_DOCUMENT_TOKEN_TO_BE_REPLACED
Add Your Comments
Support Independent Media
We are 100% volunteer and depend on your participation to sustain our efforts!