by News You Can Use
Robert Ring is endorsed by the Concord Police Department for the District 1 council seat. Robert Ring also has the support of the American Council, a Christian Nationalist PAC which is supporting like-minded candidates in city council and school board races. 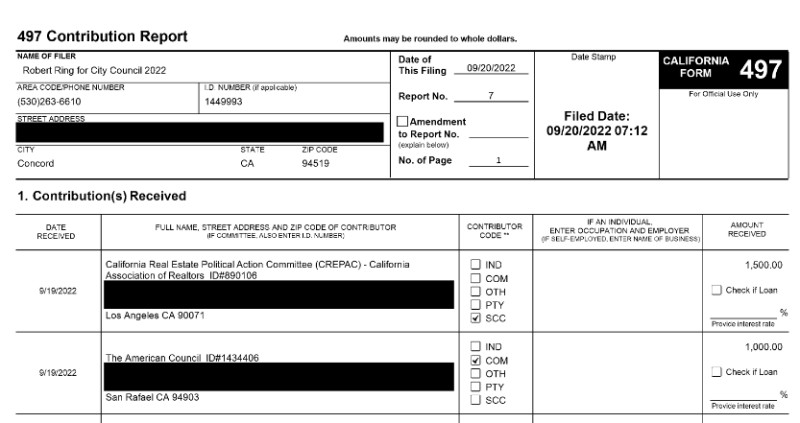 original image (833x441)
The Concord Police Officer's Association have gone all in on Robert Ring. Concord's fourth district has 3 candidates, and Robert Ring is their guy. During last month's Contra Costa County TV forum for D1 candidates, He touted his double endorsement from the Police Association and the Contra Costa County Deputy District Attorney's Association. Ring said "I am the candidate of law and order."
Video: https://www.youtube.com/watch?v=uN-KtPXDnzs

As part of his platform, Robert Ring proposes raising the pay of the police department. Ring acknowledges that 57% of the Concord city budget goes to the police, but he is calling for an increase for pay and for equipment. Ring has not explained where the money for such an increase in police spending is going to come from.

Robert Ring received $1,500 from the police association. It's an investment. Need to spend to money to make money.

Ring is the "law and order" candidate. What guides his sense of what that phrase means? Is he guided by the "Book of American Laws" (She-Hulk reference, I couldn't resist) or could Ring be guided by some particular religious sense of "law and order"?

Their stated goal is "mobilizing people of faith to pursue revival and reformation in America." (Website: https://www.theamericancouncil.com) These are right-wing Evangelicals who want to Make American Great Again. Former Trump senior adviser Kayleigh McEnany is headlining the American Council Gala. This is a fundraiser to "fight for Biblical values in in legislation and the ballot box". (Info here: https://americancouncil.ticketspice.com/the-american-council-gala) This is a theocratic fascist political movement, and Robert Ring is the candidate for "law and order" in Concord.

Who else has endorsed Robert Ring? Ring also has the endorsement of Assembly-member (CA 14) Tim Grayson, a former city council member and an Evangelical preacher. Grayson was a Republican, who cleverly ran as a Democrat to get his seat on the state Assembly. Here's a photo of Grayson and the "law and order" candidate: https://www.facebook.com/photo/?fbid=124613253684238

The Contra Costa Building and Construction Trades Council also endorse Ring. Ring is Pro-Seeno. The Seeno family of developers are in negotiation with the city of Concord to develop the Concord Naval Weapons Station. Ring's two opponents are both against Seeno, as is the general public. The Seeno deal has become a huge scandal, with allegations of bribery and organized-crime tactics. Oh, the police association is also involved with this scandal, as they have openly supported Seeno. Why are the police involved in a construction and development matter? That's a good question, which seems to involve some kind of quid pro quo. Ring's the "law and order" candidate.

Christian Nationalists are supporting Robert Ring. The cops like him, too. Tim Grayson is all in on Ring. The endorsements and the checks are coming in.... Ring-A-Ding-DIng! Ka-ching!
§Concord Police Donation
by News You Can Use

original image (873x365)
Here is the contribution from the Concord Police Officers Association. They either didn't do their research before choosing their candidate, or they did their research and they like what they see. After donating, they gave their official endorsement.

The Concord police do not have civilian oversight..

Stay tuned for more. Oh yes, there will be more!

Add Your Comments
Latest Comments
Listed below are the latest comments about this post.
These comments are submitted anonymously by website visitors.
TITLE
AUTHOR
DATE
Thank You Benicia Independent
News You Can Use
Support Independent Media
We are 100% volunteer and depend on your participation to sustain our efforts!