by Labor Video Project
Community activists, kids and public education supporters protested at the LA meeting of FCMAT. They spoke out and shut it down when the FCMAT refused to provide answers. 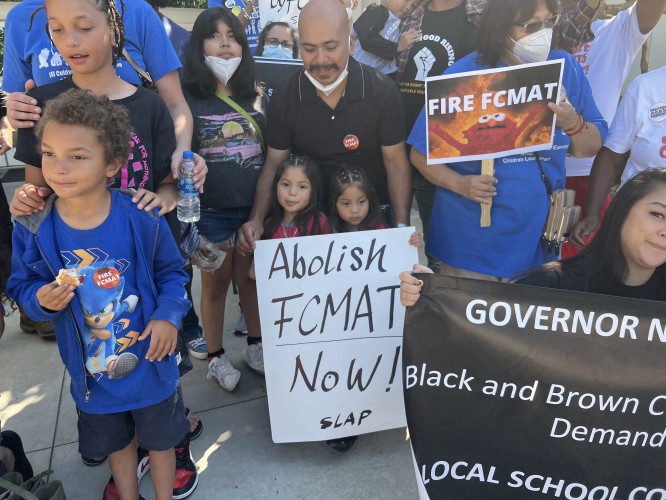 original image (4032x3024)
Dozens of parents, students, teachers and public education advocate from around the state rallied and spoke out at the meeting of FCMAT Fiscal Crisis & Management Assistance Team (FCMAT) in Downey at the Los Angeles County Board of Education. They were from the Ingelwood School District and the Oakland Unified school district.

FCMAT is a “non-profit” funded by the State of California which they said had been used as a tool to destroy public schools in Black and Brown working class communities while expanding charters. The FCMAT tried to keep the community and labor members out but were forced allowed them to speak and later were forced too adjourn the meeting after speaker demanded answers. The FCMAT board is made up mostly of superintendents from rural white districts and also charter representatives. State Superintendent of Public Instruction Tony Thurmond has backed FCMAT allowing to push forward with the closure of 11 schools in Oakland and around the state.

Participants called for the shutdown of the state funded agency and full funding for public schools in California.

This was the first protest against FCMAT which usually is able to operate without public oversight. The UTLA, OEA, SEIU, CTA, CFT and other education unions in the State have been completely silent about this union busting "non-profit" funded by the Democratic legislature and Governor.

The action was supported by Oakland Not For Sale, Schools & Labor Against Privatization SLAP, We Are F.R.E.E. Inglewood, Real Moms Of Magnolia Street Resident of Oakland, HEAT, Higher Education Action Team HEAT, United Front Committee For A Labor Party UFLCP and Inglewood Rising.

Attack on CCSF By FCMAT
https://beyondchron.org/errors-exaggerations-and-bias-in-the-fcmat-report-on-ccsf/

History Of FCMAT In Oakland
https://tultican.com/2022/05/28/fcmat-californias-unaccountable-political-player/ 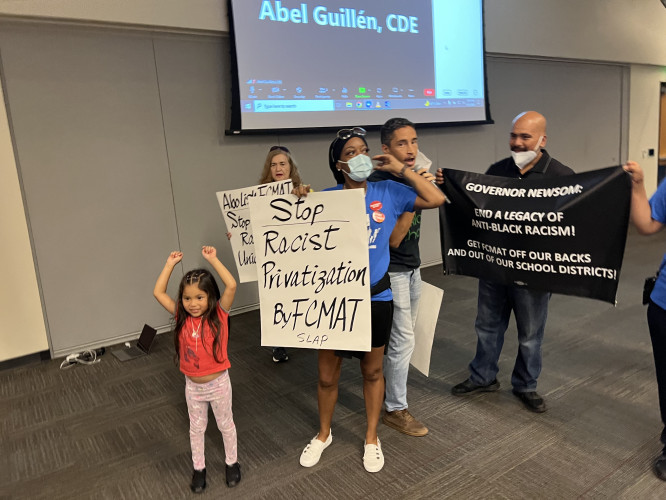 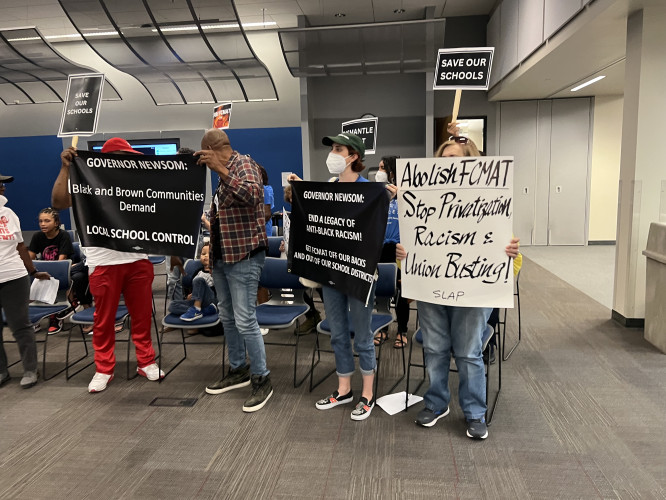 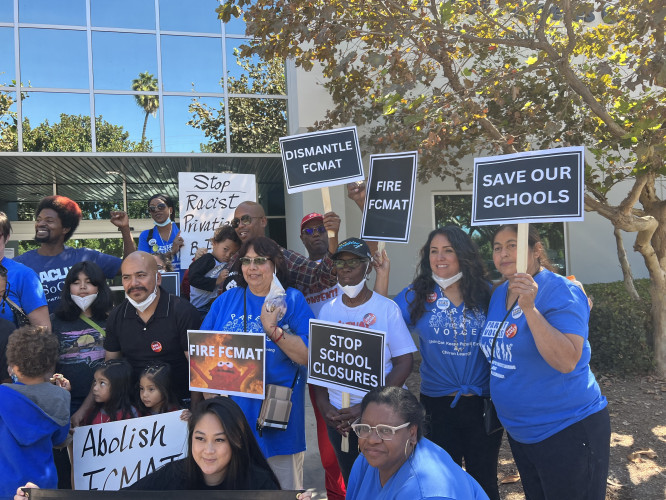 original image (4032x3024)
Although California has a $100 billion dollar surplus the Democratic governor and super majority Democratic legislature are allowing the FCMAT which they fund to take over school districts and force school closures in these communities replacing the schools with charters.
END_OF_DOCUMENT_TOKEN_TO_BE_REPLACED
§A Great Grandmother Confronting FCMAT Official
by Labor Video Project 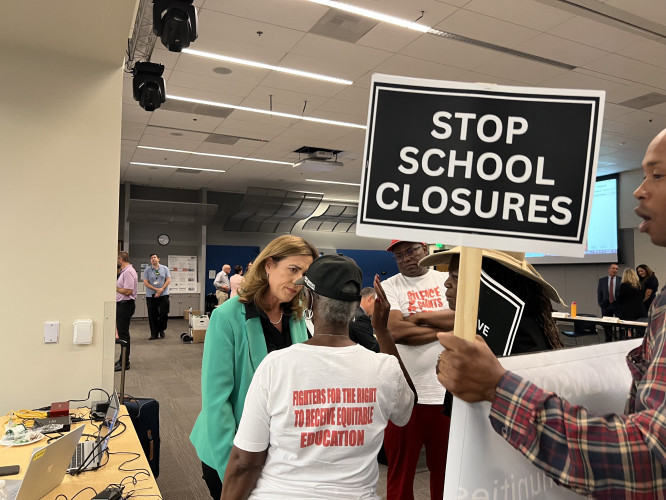 original image (4032x3024)
One of the participants was a great grandmother who fought segregation in the South and now in California schools. She confronted FCMAT official about their attack on her grand children.
END_OF_DOCUMENT_TOKEN_TO_BE_REPLACED
§In The Hall At The FCMAT Meeting
by Labor Video Project 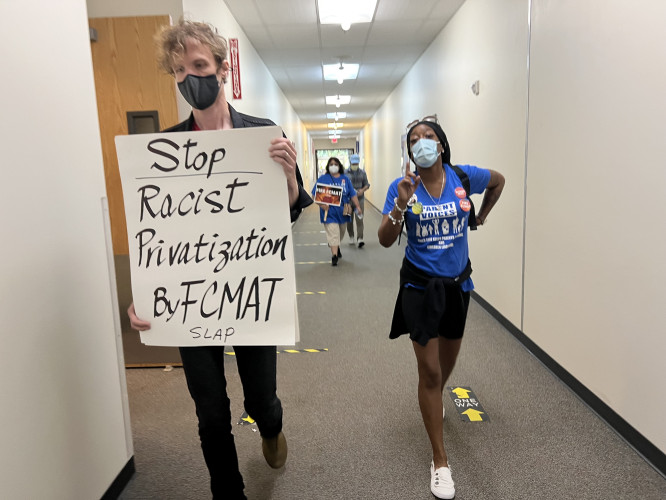 original image (4032x3024)
FCMAT officials tried to stop people from entering the building but were forced to open it up to the public.
END_OF_DOCUMENT_TOKEN_TO_BE_REPLACED
§FCMAT Meeting Taken Over
by Labor Video Project 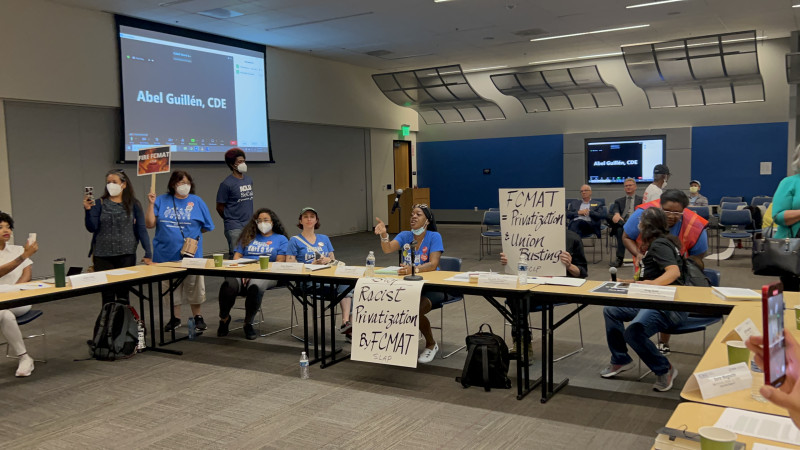 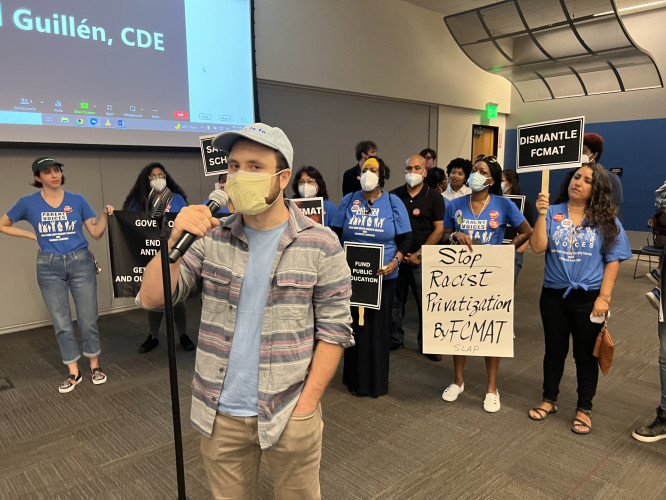 original image (4032x3024)
A UAW 2865 graduate student Peter Racioppo supported the fight against privatization and supported a labor party as a political alternative to the Democratic Party which is pushing privatization and charters through FCMAT. He is also a member of UFCLP
END_OF_DOCUMENT_TOKEN_TO_BE_REPLACED
§Oakland Parent Max Orosco Spoke At FCMAT Meeting In LA
by Labor Video Project 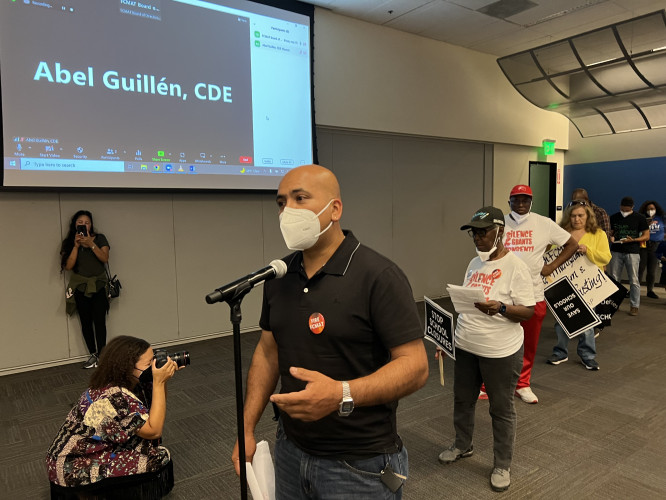 original image (4032x3024)
Max Oroso, a parent of Oakland kids and a member of Schools and Labor Against Privatization SLAP also spoke out about the effect of school closures on his children. He is also running for the Oakland School Board.
END_OF_DOCUMENT_TOKEN_TO_BE_REPLACED
Add Your Comments
Support Independent Media
We are 100% volunteer and depend on your participation to sustain our efforts!