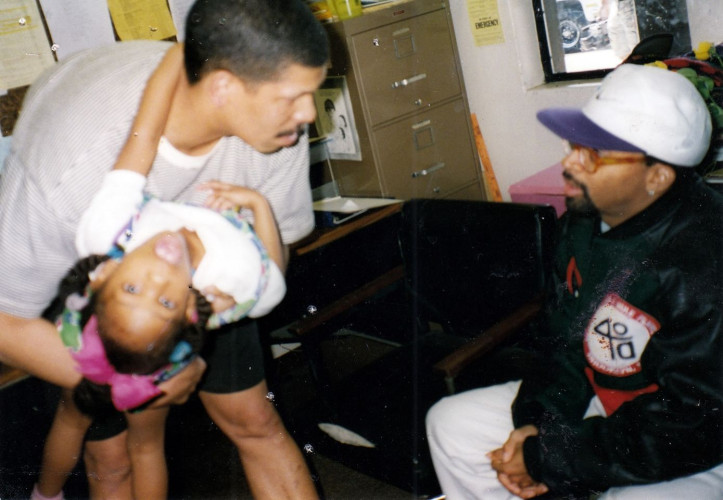 original image (1389x960)
Richmond resident and Emmy nominated producer and director Doug Harris, is a media producer and filmmaker, whose primary focus has been to produce documentaries and educational media that chronicles and preserves the untold history through a range of topics which include biographical stories, historical events, communities, politics and art & culture.

Harris is a former All American basketball player and coach, who was drafted by the Golden State Warriors (1983). He was the for Executive Director of Athletes United for Peace, a Berkeley based non-profit committed to promoting peace, education and friendship through sports and media programs with youth and young adults.

His career in media begin after establishing AUP's media division, the corner stone of the organization's involvement of the United Nation's team of world-wide NGO's through the agency's Department of Public Information.

In the 1990's, Harris was the Recreation Program Coordinator at the City of Richmond's Shields-Reid Community Center in North Richmond. In 1993, Harris was advised that veteran film director, producer and actor Spike Lee and Basketball Hall of Famer Tim Hardaway would be coming to the Shields-Reid Community Center to promote Lee's 'Live Together, Play Together' campaign, the 'Urban Jungle Gym' which promoted unity, peace and a love of basketball to youth and young adults.

The Nike Shoe corporation tag-teamed with Lee when they introduced their new basketball shoe apparel to accompany Lee's ' Urban Jungle Gym' campaign. Nike selected the outdoor basketball courts at Shields-Reid Community Center to be renovated and refurbished after years of use by local basketball players there.

Harris noted: " It was such an honor to be selected by Nike, that our basketball courts would be the first courts in the Urban Jungle Gym tour to be refurbished and renovated nationally throughout the country."

When it was announced to both the media and the public that Lee and Hardaway would be making the appearance at Shields-Reid Community Center to promote the Urban Jungle Gym and the new makeover by Nike of the basketball courts, the community of North Richmond and the surrounding cities became electrified with excitement.

Large crowds surrounded the community center in hopes of seeing or getting photos of the two celebrities. At that time, I was entertainment reporter for the Post News Group and had been assigned to cover the event. I finally was admitted into the community center with dozens of other media reporters, I saw that Spike Lee was exhausted and overwhelmed with so many people there at the event. Harris recalls taking Lee into his private office to be able to chill out and get some respite from all of the crowds. Harris said: " He was simply overwhelmed by all of the people and the media there!'

It looked like Lee was done with his interviewing for the day and couldn't handle much more attention coming from his fans and the Bay Area media. I knew I just had to get one quote or comment from Lee in order to have a successful entertainment column to share with my reading audience. The media people were getting ready to leave and I shouted out my question to Spike, knowing he was about become a father, how he felt about fatherhood and raising children with his wife. He paused and looked at me, almost ready to leave and give me a big smile.

Knowing he was going to answer the media television crews quickly set-up their cameras again. He replied: " I look forward to being a father and the many wonderful things being a parent can be when raising children. Children are so rewarding and I look forward to being a dad. " That would be the last time I would ever see Spike Lee , but people still talk about it like it was yesterday.

And as for the newly refurbished and renovated outdoor basketball courts that Nike had completed for the ceremony, Doug Harris christened the new outdoor courts with an amazing reverse dunk and slammed the basketball into the hoop, looking out towards the crowd much to the delight of those who were in attendance that day.
§
by Mike Raccoon Eyes Kinney
Tuesday Sep 20th, 2022 8:01 PM 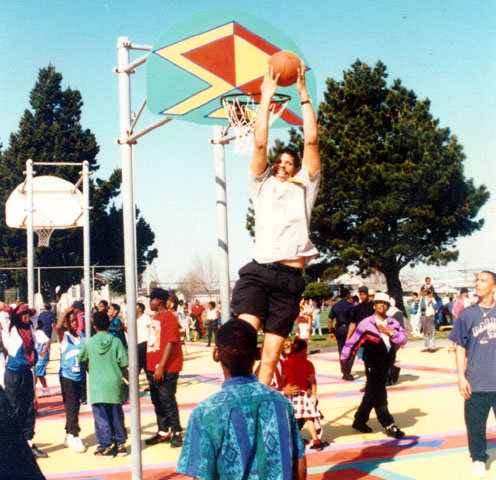 Photos courtesy of Doug Harris
Add Your Comments
Support Independent Media
We are 100% volunteer and depend on your participation to sustain our efforts!