Add an Event
Newswire
Calendar
Features
Home
Donate
From the Open-Publishing Calendar
From the Open-Publishing Newswire
Indybay Feature
Related Categories: East Bay | Government & Elections | Police State & Prisons | Racial Justice
Some Oakland Cops Rake In Half A Million Annually, & Have Millions Of Dollars Stashed Away
by Lynda Carson (newzland2 [at] gmail.com)
Friday Sep 16th, 2022 12:00 PM
Despite the Oakland cops having having millions of dollars stashed away at various locations, the City of Oakland remains on the hook to settle lawsuits because of the activities of the Oakland cops. 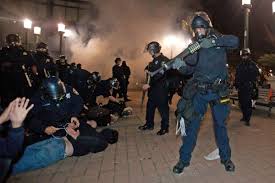 Some Oakland Cops Rake In Half A Million Annually, & Have Millions Of Dollars Stashed Away

Recently, reportedly, the city of Oakland has agreed to pay $360,000 to settle a federal lawsuit filed by Wilson Riles Jr., a former City Councilman. Riles claimed that city staff and police officers racially discriminated against him and used excessive force during his arrest around three years ago at a planning office.

In 2020, reportedly the family of a sleeping homeless man fatally shot by Oakland police in 2018 has agreed to settle for $1.4 million in a lawsuit with the city, and in 2018 the Oakland City Council approved a $12 million payment to a man who was run over by a police officer while riding his motorcycle downtown.

In another case, reportedly in 2014 the City of Oakland agreed to pay Scott Olsen, a 26-year-old Iraq war veteran, $4.5 million to settle a federal lawsuit Olsen filed after being shot in the head with a beanbag by a violent Oakland police officer during an Occupy protest on Oct. 25, 2011.

Some Oakland Cops Rake In Half A Million Annually, & Have Millions Of Dollars Stashed Away:

Public records reveal that many Oakland cops rake in over half a million dollars in pay and total benefits annually, and that many of the cops are using the money for political activities according to Open Disclosure, and according to records with the Secretary of State.

Additional records reveal that in 2021, the Oakland Police Officers Association had a revenue of $2,202,613, and after subtracting their assets from their liabilities, they had $2,941,298 in net assets.

According to more public records, in 2020 the Oakland Police Officers and Firefighters Health and Welfare TR had a revenue of $1,600,522, and $4,769,006 in net assets. This was established for the purpose of providing dental care benefits to eligible participants. However click here to find additional information regarding dental care for the firefighters and police.

Oakland is the city where Oscar Grant was killed by the cops at the Fruitvale BART Station in 2009, and in the 60s the brutality of the cops inspired the Black Panthers to fight back.

Reportedly, between 2001-2011 the city paid $57 million to alleged victims of police abuse—the largest sum of any city in CA. Additionally, reportedly from 2000 to 2012, there were 87 officer-involved shootings in Oakland, 39 of them fatal.

Despite the Oakland cops having millions of dollars stashed away at various locations, the City of Oakland remains on the hook to settle lawsuits because of the violent activities of the Oakland cops.