by Brenda Norrell
Poisonous Green: The Navajo Nation freight rail scam follows the announcement that the atomic bomb industry is heading energy transition in the Four Corners. The United States government has long deemed the Four Corners a sacrifice zone. It remains strewn with radioactive tailings from uranium mining. Coal fired power plants on the Navajo Nation have left a trail of suffering, disease and death.

original image (1015x433)
The freight rail proposal presented in Shiprock, New Mexico, on the Navajo Nation, on Tuesday, comes after the announcement that the atomic bomb industry is heading the new energy transition in the Four Corners. The United States "clean energy economy" is on track to continue the use of the Four Corners as a sacrifice zone. -- Censored News

NAVAJO NATION, SHIPROCK, New Mexico -- First, It was a good turnout in Shiprock and I want to thank everyone who provided public comments at this 3 hour public info meeting to inform the County, State, Federal and even our own Navajo officials that building a Freight rail is not heavily supported from people who live in the path of this proposed heavy load railroad.

For this initial process San Juan County is the lead agency who was awarded a $2 million grant for a feasibility study. In yesterday's presentation there were no Navajo Nation officials to explain the MOU, memorandum of understanding, that was signed in February of 2020 by Navajo Nation President Jonathan Nez, Navajo Nation Vice President Myron Lizer and Navajo Nation Attorney General Doreen N. McPaul.

The proposed route of the freight rail line passes through the region on the Navajo Nation that already has strewn radioactive tailings left from uranium mining.

U.S. and Navajo politicians talk about clean up. That has not happened.

The proposed freight rail line is also in the area on the Navajo Nation where two Navajo coal-fired power plants have poisoned the land, air and water, near Shiprock and Bloomfield.

The United States government deemed the Four Corners a sacrifice zone and is responsible for the Dineh respiratory diseases and cancers on the Navajo Nation.

Dineh who worked in the uranium mines were never told that the dust was radioactive and deadly. In Red Valley and Cove, south of Shiprock, every Dineh family had a family member who suffered from cancer.

Church Rock, near Gallup, was the site of one of the worst radioactive spills in U.S. history. The radioactive water now flows toward Flagstaff in the Rio Puerco wash.

The Navajo Nation government signed the leases, and was paid royalties, for the coal mines and coal-fired power plants for electricity. The electricity was primarily for non-Indians in the Southwest.

The third coal fired power plant on the Navajo Nation was on the northwestern edge in Page, Arizona. Peabody's coal mines on Black Mesa, forced relocation, and Dineh suffering fed this power plant, carrying electricity to non-Indians in the Southwest.

The national media has relied on the spin of politicians, and a hit-and-run style of reporting, if they are present on the Navajo Nation at all.

In Farmington, the U.S. government said the Four Corners Rapid Response Team will be led by Los Alamos National Laboratory focused on the region’s transition to a clean energy economy.
There was a visit to a local oil and gas field, and private meeting at San Juan College, according to the United States government's Interagency Working Group (IWG) on Coal and Power Plant Communities and Economic Revitalization on August 25, 2022. 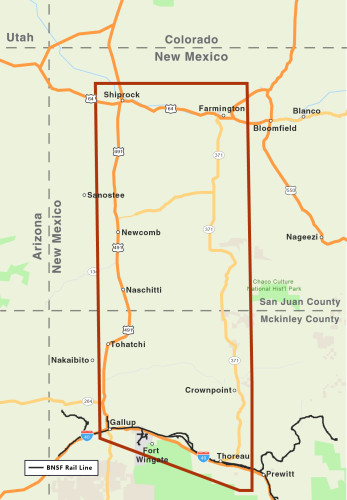 original image (1262x1818)
Proposed freight rail line routes on Navajo Nation
END_OF_DOCUMENT_TOKEN_TO_BE_REPLACED
Add Your Comments
Support Independent Media
We are 100% volunteer and depend on your participation to sustain our efforts!