Add an Event
Newswire
Calendar
Features
Home
Donate
From the Open-Publishing Calendar
From the Open-Publishing Newswire
Indybay Feature
Related Categories: U.S. | Government & Elections
Steve Bannon Arraigned for Fraud
by INDYRADIO
Thursday Sep 8th, 2022 7:22 PM
The long awaited indictment of Steve Bannon was unsealed this morning in New York, and he showed up slightly after 9:00 am for his arraignment on state charges that were pardoned during the last hours that Trump held office. The indictment is attached below this brief report. 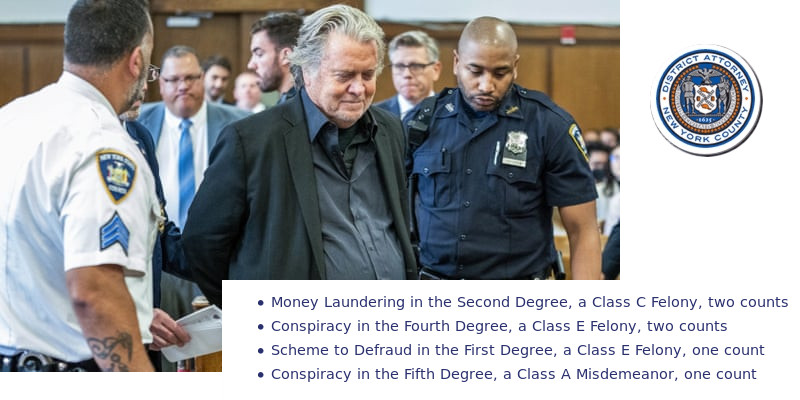 INDYRADIO (08sept22) Steve Bannon showed up early this morning at the Manhattan district attorney’s office to surrender on charges of fraud, conspiracy and money laundering. At his arraignment, he filed a plea of not guilty and was released without bail.
Bannon's co-conspirators, Brian Kolfage and Andrew Badolato pled guilty in their federal trial, and were due to be sentenced this month, but sentencing has been delayed until December.
Both admitted their guilt, and Andrew says he is "terribly sorry" that he swindled donors. Although each could face 40-50 years in prison, prosecutors are expected to recommend 4 or 5.
Thanks to a presidential pardon on Trump's last day in office, Bannon was removed from the federal case, but the pardon carries no weight at the state level.

“As alleged, Stephen Bannon acted as the architect of a multi-million dollar scheme to defraud thousands of donors across the country – including hundreds of Manhattan residents," said Manhattan District Attorney Alvin L. Bragg, Jr. in a joint statement with New York Attorney General Letitia James today.

"Mr. Bannon took advantage of his donors’ political views to secure millions of dollars which he then misappropriated. Mr. Bannon lied to his donors to enrich himself and his friends," added Attorney General James.

http://indyradio.net
§Co-conspirators cut a plea deal in their federal trial
by INDYRADIO
Thursday Sep 8th, 2022 7:22 PM
Co-conspirator Andrew ("Build the Wall") Badolata of the Florida corporation that proposed to build a border wall with private funds says he is "terribly sorry" for swindling donors to the project. He's seen here in one of his Facebook posts.
http://indyradio.net
§Here the indictment unsealed today.
by INDYRADIO
Thursday Sep 8th, 2022 7:22 PM 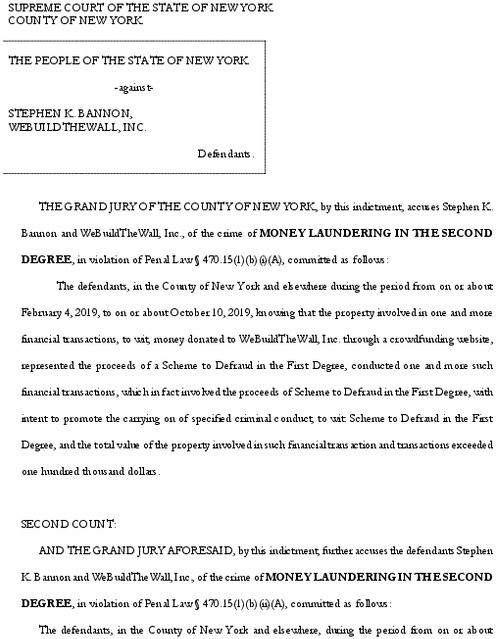 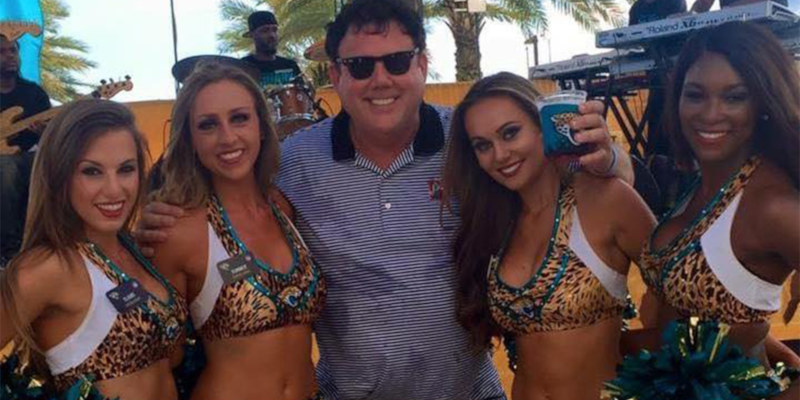 A few thngs we missed: credit for the arraignment photo goes to Steven Hirsch of AP.org and here's the Facebook photo from convicted co-conspirator Andrew Badolato.
Terribly sorry.
http://indyradio.net
Add Your Comments
Support Independent Media
We are 100% volunteer and depend on your participation to sustain our efforts!