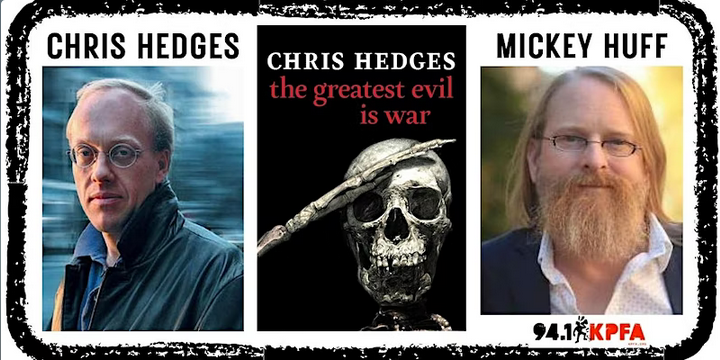 “Hedges delivers a blistering condemnation of war in all forms and for all reasons…this spiky treatise deserves to be reckoned with.” Publisher’s Weekly

“Chris Hedges has compiled a remarkable record of reporting and analysis. This is a contribution of great significance in these troubled times.” Noam Chomsky

An unflinching indictment of the horror and obscenity of war by one of our finest war correspondents, this book looks at the hidden costs of war, what it does to individuals, families, communities and nations.

In fifteen short chapters, Chris Hedges astonishes us with his clear and cogent argument against war, not on philosophical grounds or through moral arguments, but in an irrefutable stream of personal encounters with the victims of war, from veterans and parents to gravely wounded American serviceman who served in the Iraq War, to survivors of the Holocaust, to soldiers in the Falklands War, among others. Hedges reported from Sarajevo, and was in the Balkans to witness the collapse of the Soviet Union.

In 2002 he published War Is a Force that Gives Us Meaning, which the Los Angeles Times described as “the best kind of war journalism… bitterly poetic and ruthlessly philosophical” and the New York Times called “a brilliant, thoughtful, timely, and unsettling book.” In the twenty years since, Hedges has not wanted to write another book on the subject of war—until now, with the outbreak of war in Ukraine. It is important again to be reminded who are the victors of the spoils of war and of other unerring truths, not only in this war but in all modern wars, where civilians are always the main victims, and the tools and methods of war are capable of so much destruction it boggles the mind. This book is an unflinching indictment of the horror and obscenity of war by one of our finest war correspondents.

Chris Hedges is a Pulitzer Prize–winning journalist who was a foreign correspondent and bureau chief in the Middle East and the Balkans for fifteen years for The New York Times. He previously worked overseas for The Dallas Morning News, The Christian Science Monitor, and NPR. Hedges, who holds a Master of Divinity from Harvard University, is the author of numerous books, and was a National Book Critics Circle finalist for War Is a Force That Gives Us Meaning. He has taught at Columbia University, New York University, Princeton University, and the University of Toronto.

Mickey Huff is the director of Project Censored and president of the nonprofit Media Freedom Foundation. To date, he has co-edited 14 editions of the Project’s yearbook, including most recently Project Censored’s State of the Free Press (2022), with Andy Lee Roth. He is co-author with Nolan Higdon, of Unites States of Distraction: Media Manipulation in Post-Truth America (and what we can do about it) (City Lights, 2019) and Let’s Agree to Disagree: A Critical Thinking Guide to Communication, Conflict Management, and Critical Media Literacy (Routledge, 2022). He is the executive producer and host of The Project Censored Show on KPFA/Pacifica Radio and a professor of social science, history, and journalism.

MEDIA CONTACT: Kevin Hunsanger, KPFA Radio: kevinh [at] kpfa.org 510-684-3401.
END_OF_DOCUMENT_TOKEN_TO_BE_REPLACED
Added to the calendar on Thu, Sep 8, 2022 2:02PM
Add Your Comments
Support Independent Media
We are 100% volunteer and depend on your participation to sustain our efforts!