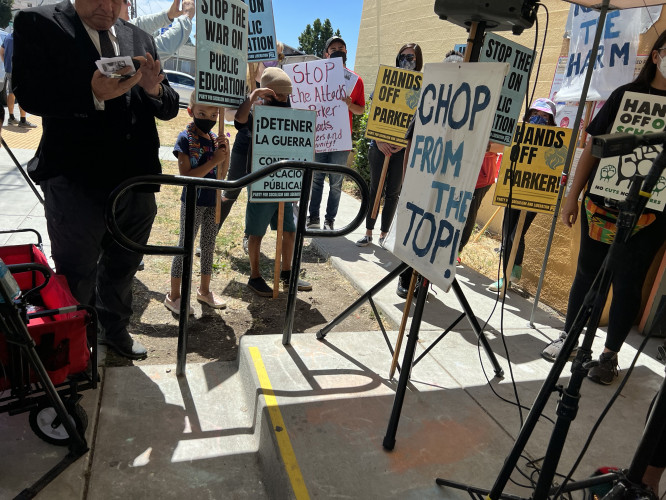 The movement in Oakland, California against school closures has been centered at Parker Elementary Liberation School, a K-5 school located in East Oakland. This occupation has gone for 95 days, which is the longest in California.

Since May 28th, union activists, teacher militants, community members, and youth have maintained a clean and well-organized occupation of Parker Elementary, organizing barbecues, school educational events, community meetings, and a host of other activities. These efforts have gained the support of the working-class neighborhood, and have reconnected education workers, students, and community members.

The take-over—initiated by parents and the community and backed by teachers—aims to stop the closure of this community school in East Oakland, which is one of 11 scheduled to be closed and in many cases turned over to charters and/or developers.

The Oakland Unified School District has retaliated with violence and propaganda aimed at defaming the community fighting back at Parker. In late July, the school district security force came into the building attempting to remove the people working in the school during a normal day. They used violent tactics to inflict physical harm on the people present. However, a call was put out to the community and to supporters of Parker Community Liberation School to come to the school and oppose the school district security assault. This defense mobilization was successful in thwarting the attack.

Weeks later, after the Israeli government’s military assault on Palestine, the Palestinian solidarity movement in the San Francisco Bay Area held a vigil at Parker Elementary School to show solidarity with the Palestinian people. The school district used the internet portal, Parent Square, to contact parents in OUSD, to spread lies about the Parker school occupation, and to defame and discredit the solidarity rally being held at the school.

Over 50 people attended the rally, which was totally peaceful, and which showed solidarity with both the struggle at Parker and with the Palestinian people and all oppressed people fighting for self-determination and freedom.

As the Parker occupation enters its fourth month, unions such as the teachers’ union, the Oakland Education Association, and the International Longshore and Warehouse Union Local 10 have issued statements of support.

The UFCLP supports the struggle of workers and youth at Parker Liberation School and calls on working people to mobilize to stop these closures and defeat the efforts to privatize education and public services.

We need to rally and organize support from other unions of teachers, nurses, and workers from other industries to show solidarity in action with the Parker movement. We also must organize a campaign in the entire labor movement to demand the rehiring of two OUSD teachers who the district fired for supporting the Liberation School. This blatant attack on these teachers is aimed at silencing and intimidating other teachers who are opposed to shutting down public schools and replacing them with charters.

What precipitated the takeover?

In California, the Democratic Party-run political establishment and the union bureaucracies are pushing to unionize the charter schools, creating a two-tier education system that is undermining public education and gutting the California Teachers Retirement Systems (CTRS).

The AFT & NEA union leaderships have taken money from billionaires such as Bill Gates and other privatizers who support charters. They also support Democrats like Gavin Newsom and State Superintendent of Public Education Tony Thurmond, who are stalwart supporters of charters and are funded by billionaire charter privatizers like Netflix-owner Reed Hastings and A’s-owner John Fisher. Fisher, who runs the KIPP and Rocketship charters chain, is also involved in privatizing the Port of Oakland for a new stadium funded by $850 million of taxpayer money.

The Democratic Party, from Governor Newsom on down, has supported charters and the privatization and outsourcing of education and public service jobs. The Democrats have also supported the Financial Crisis Management and Assistance Team (FCMAT), a state-funded “non-profit” that is instituting orders to shut down working-class, largely Black and Brown K-12 schools and community colleges.
FCMAT is supported by Tony Thurmond, Democrats Nancy Skinner and Rob Bonta, and other Democratic Party politicians in California.

What can we do about this?

The move by privatizers and the Democratic Party to close public schools is an attempt to make the working class and poor shoulder the crisis of capitalism, and it is a racist attack on racial minorities and immigrants. Teachers, workers, and community members must come together in a United Front, such as the Schools and Labor Against Privatization (SLAP) coalition. We must build a statewide and national movement of workers and community members to defend public education, as part of a broader movement for an independent working-class political party.