Add an Event
Newswire
Calendar
Features
Home
Donate
From the Open-Publishing Calendar
From the Open-Publishing Newswire
Indybay Feature
Related Categories: Santa Cruz Indymedia | Health, Housing & Public Services
Nine Hundred Days of Love
by Keith McHenry
Wednesday Aug 31st, 2022 9:39 AM
Day one of the pandemic restrictions here in Santa Cruz, California was on a misty Saturday, March 14, 2020. The indoor meals for the poor were ordered closed and access to water and toilets for those who lived outside locked. 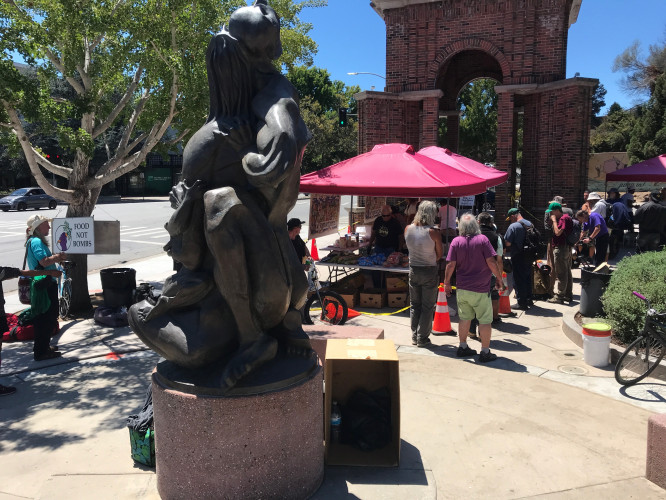 original image (4032x3024)
The volunteers of Santa Cruz Food Not Bombs met at LuLu Carpenters that morning to sketch out a plan on how to respond. A health professional walked us through the COVID safety protocol she had been taught at Good Samaritan Hospital the day before. We outlined our plan. Move to the Town Clock so the usual line of 40 people would not be standing next to the people living in tents up against the Post Office fence. We planned to pass the plates down the row from gloved server to gloved server asking each person what they wanted added to their plate.

We were ready for a month long lockdown to slow the spread. Saint Francis, the senior meal at Louden Nelson and the Monday night coffee house at the Little Red Church would resume soon. We could fill the void of shuttered meal programs for a month or so at least.

It’s 900 days later and the indoor meals are still closed or restricted, no Monday night coffee house. Who would have imagined in those first days that we would have to navigate so many twists and turns in our journey to meet the needs of our community?

Preparing for the unknown is our speciality. We moved to the Town Clock and placed a distancing barrier of large yellow Trader Joe’s lugs and yellow caution tape between the serving tables and those joining us for a meal. The bleach stains on my seven black Food Not Bombs t-shirts attest to the hours spent disinfecting tables and van surfaces. The faint ghost six-foot-apart spray painted dashes marching towards our service areas are a sad reminder of those days of fear.

The only people outside were those without housing, our volunteers and the police. Traffic had vanished. I waved at drivers passing by and they waved back.

The city erected COVID triage cages on downtown parking lots to quarantine the unhoused. That cruel plan was abandoned in short order as the optics and our lack of cooperation with their plan to have Food Not Bombs lure the homeless into their inhumane scheme failed.

We unloaded dozens of pallets of dry goods donated by Second Harvest Food Bank, storing thousands of pounds of rice, beans and canned food first at Barrios Unidos and our first shipping container. We would buy two more 20 foot conex boxes in the first year of the crisis. They are also filled to the ceiling. We are getting ready for the food shortages.

We helped organize a weekly grocery distribution for the Live Oak School District even as the city was evicting us into the flooded grounds of the Benchlands, kicking us out of the Town Clock to Garage 10 on River Street, then out into the rain. Our equipment was swamped in nearly two feet deep water so we returned to the garage. They wouldn’t end their campaign of evictions until we returned to the Town Clock and ignored their efforts to drive us out of sight to the margins of our community. After all we have wars and poverty to protest and the Collateral Damage statue is the traditional public space for free speech and assembly. Our protest is daily from 12:00 noon to 3:00 pm and includes a hot full course meal, coffee, water, groceries and clothing. The theater of what is possible.

When the holidays came we helped organize that year’s Community Thanksgiving and Christmas hosting the well attended feast at Lot 27. The Vets Hall was a shelter and indoors at the Santa Cruz Museum of Art and History was out of the question according to government restrictions. We collaborated with Lee Brokaw and the Veterans for Peace, the crew at India Joze and Steve Pleich. A few dozen people from the community volunteered to help. We had piles of pies. These were beautiful days of love and joy.

We also participated in blocking the city’s 2020 Holiday Evictions of the over 100 campers trying to survive at San Lorenzo Park. We joined the Santa Cruz Homeless Union in filing a Federal Lawsuit that stopped the sweep, protecting them from facing arrest if driven to the doorways and levee banks of downtown.

A year later we provided another Thanksgiving dinner at the corner of Laurel and Front Streets and overcame huge obstacles to share the Community Christmas Dinner under the parking garage at 24 River Street during the driving rain.

Desperate fire evacuees joined us at Lot 27 under the eerie red skies, seeking food and clothing as they fled the CZU Lightning Complex Fires, many with only the clothes on their back.

We had to adjust to ever changing conditions. We scrambled for a kitchen when the Vets Hall was turned into a shelter. India Joze kitchen bridged the gap. We secured the Little Red Church until they needed to reclaim their kitchen and had to move to a commercial space in Scotts Valley.

The daily packing and unpacking of our food, hand washing station, tables and canopies requiring skill and several trips a day in our van to and from the meal. This seemed unsustainable so we bought our second shipping container and placed it at our meal. A month later a luxury condominium developer surprised us one afternoon saying he would seize our equipment and shipping container. They had escrow in the morning he pleaded. We had to call a flatbed to move it across the street from the abandoned Taco Bell to Lot 27 reclaiming the parking lot for a second time.

A late Friday afternoon call from the city manager’s office threatening to take our conex box to make room for more construction forced us to make another hasty move to the parking lots down Front Street when yet another threat by another luxury condominium developer from Sandy, Utah forced us to move to the Ron Swenson’s land near the Homeless Garden Project. But it didn’t take long for the city to kick us off his private property so we moved it and the tons of food it stores to a location out side the city limits.

In the early days the emotional stress of the unknown sparked outbursts and fights among some of the more fragile people attending our meal. There were times when it seemed someone might get beaten to death if we didn’t intervene. Just like our friends who joined us for food we never quarantined. But our shared days of misery in those first months helped strengthen our relationships and the tension and violence started to calm as people became relaxed about the pandemic’s threat.

We hosted Johnny’s free solar powered concerts at every holiday and celebrated the 40th anniversary of the founding of Food Not Bombs in Lot 27 with Keith Greeninger. Live music filled the perfect May afternoon during Soupstock 2022 at the San Lorenzo Duck Pond.

The people of Santa Cruz have been generous, delivering food, clothing, survival gear and money. A group has set up an herbal tea stand at the meal. The UCSC farm drops off their fresh produce. Random student groups pass by with vegan burgers. Curtis Reliford donated bundles of clothing to the music of Ray Charles. We have been touched by so many the list would fill pages.

Our meal is often the first place the just evicted come to find services. Since the shelters are always full we try to provide them with a pup tent and offer suggestions on where to hide. To see their expression of terror at the prospects of a cold night alone on the levee is almost more than one can bear.

We are Santa Cruz intertwined with those drifting homeless on our streets and struggling to stave off eviction. We help repair vehicular homes in an attempt to keep them from being seized and junked by the city. We’ve helped connect family members. We’ve embraced those in their times of crisis and danced together in defiance of the lockdown fear that once threatened to smother hope. We fought and struggled. We laughed and loved.

We claimed our freedom from the dystopian corporate state and their celluloid avatars in local government. Predatory vultures disinterested in making necessities of life accessible to those who share our seaside community. Blind to the reality of the food riots that our meals have stopped.

Our crew of volunteers have provided healthy hot meals with about 200 people every day for 900 days. The logistics can be challenging. We developed patterns of food collection, meal preparation and service.

One team would recover food from groceries, farmers markets and bakeries. They would order two or three pallets of food from Second Harvest, storing some in our secure shipping containers, some at our kitchen and at least one pallet was delivered every week to the pantry and kitchens of the Benchlands.

Our logistics included securing pallets of donated compostable paper products from WorldCentric and buying coffee, oils and sugar from Costco. We bought propane tanks and stoves, extra canopies, kitchen equipment and a third shipping container, packing it to the ceiling with more dry goods in preparation for the expected food shortages. Volunteers work to raise money for the monthly rent of $4,100 for our commercial kitchen and hundreds of dollars in gas for our delivery vehicles. There is always the hours of paperwork and reports for insurance, Second Harvest and the Internal Revenue Service.

A sea of other essential workers kept our vehicles in working order, printed our literature and supplied us with cooking and cleaning supplies. Security guards and cashiers at New Leaf helped me load and unload our many five gallon jugs of filtered water.

Another team washed and chopped vegetables and fruit while volunteer chefs staffed the cook pots and grill. Another team set up our three canopies, eight folding tables, looped yellow caution tape around the serving area, set out our hand washing station, signs and banners and bleached the tables clean.

Scotts Valley, Harbor and Santa Cruz High, UCSC and Cabrillo students joined those doing court ordered community service and our unhoused and housed volunteers in dishing out plates of our tasty hot meals.

After packing away all our equipment it was off to wash the seven or eight five gallon hotel trays, remaining pots and pans and serving supplies.

Then we did it all again the next day over and over again for 900 days.

And we will repeat this daily ritual for another 100 days and another after that, welcoming an ever increasing number gracing our dining area of the streets.

A total of 8.5 million Americans were behind on their rent at the end of August 2022, according to the US Census Bureau. And 3.8 million of those renters say they’re somewhat or very likely to be evicted in the next two months.

Another 100 days of opportunity for love.

You can also make a donation here:
http://foodnotbombs.net/new_site/donate.php 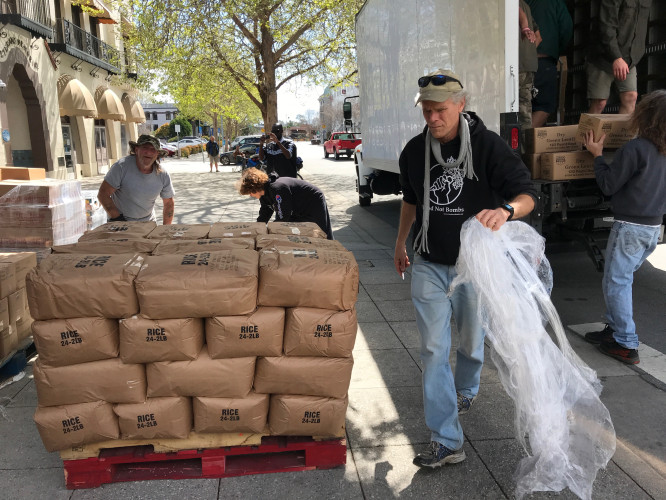 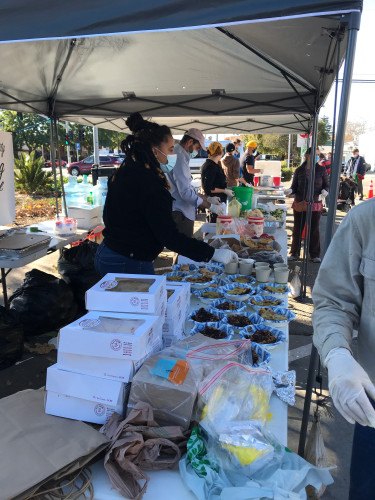 original image (3024x4032)
http://foodnotbombs.net/
Add Your Comments
Support Independent Media
We are 100% volunteer and depend on your participation to sustain our efforts!