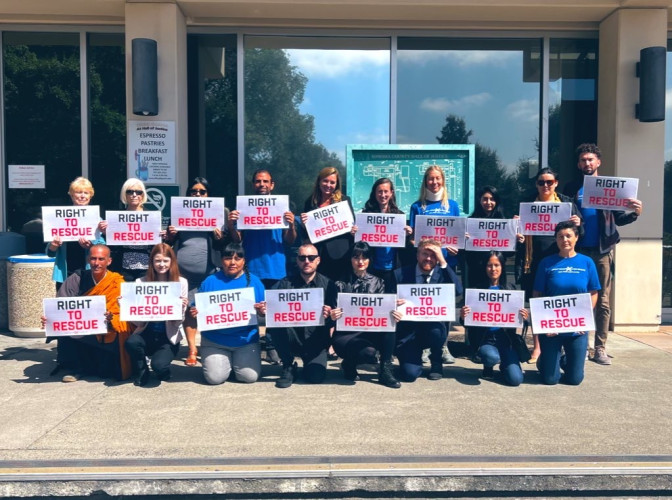 As reported by Almira Tanner, Lead Organizer for Direct Action Everywhere from the Court House in Santa Rosa:

Despite a readiness hearing the week before where all parties confirmed they were ready to go, the prosecution's main witness for the day (an employee of Reichardt duck farm) had a trip planned to Disneyland this afternoon. The judge's courtroom was a bit backed up with cases so we were about 45 minutes delayed this morning and the prosecutor (ADA Bob Waner) then said that since the witness had to go to Disneyland they could not proceed with the preliminary hearing.

Our lawyers vehemently objected stating that we had all come this way and were ready to go and this was a completely absurd reason to delay the proceedings. Jon's mom had come all the way from Eugene, Oregon on her 80th birthday for this hearing. Unfortunately, the judge sided with the prosecution, and the whole proceedings were delayed until December.

One very interesting thing that happened though was that Waner indicated he was going to drop all the charges from the McCoy's poultry farm action which took place in September 2018. These are 3 of the 8 felonies Jon and Rachel are facing. They are not officially dropped yet but he stated in court that he was going to amend the complaint so I believe him.

https://www.directactioneverywhere.com/
Add Your Comments
LATEST COMMENTS ABOUT THIS ARTICLE
Listed below are the latest comments about this post.
These comments are submitted anonymously by website visitors.