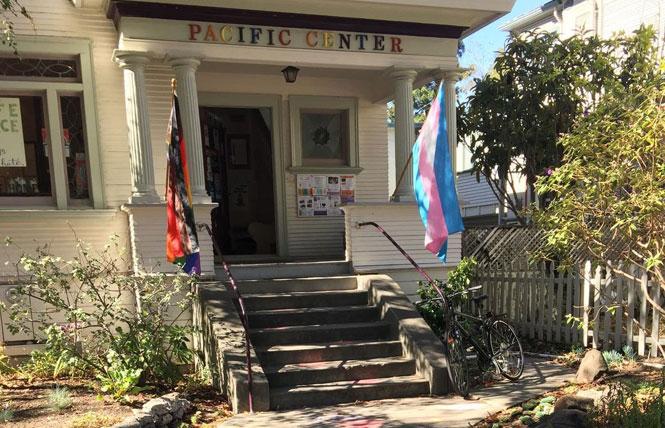 Berkeley - Berkeley’s Pacific Center for Human Growth has to find a new home after spending over 50 years serving the LGBTQ community in the same location because the building it is located in has recently been sold.

Our group would meet there once a week in the evening at 2712 Telegraph Avenue. As a facilitator of the group along with another facilitator, we tried to provide a safe place for people to come to so they could meet others, and share some of the issues they were facing at home, in their families, on the job, and in their communities.

Many of us became close friends in the group I used to help facilitate along with a woman named Kathleen Kennedy back around 1986. After our meetings, often we would go out as a group for a drink, or a cup of coffee and some food to different locations in Berkeley, and we would have a good time.

The various groups at the Pacific Center were great opportunities for people to mingle with other people in the various LGBTQ communities, or to go cruising, or to make friends with others, and to have a safe place to hang out with others.

Many of us would become friends, and hang out at each others homes at times to have dinner, or watch a movie, or take walks in the beautiful Bay Area.

It was a much more safer way of meeting others at the Pacific Center, than heading out to a bar and hanging out with a bunch of drunks on a Friday or Saturday night.

According to the website for the Pacific Center, “Peer groups are often organized in response to a need or desire to create community. A minimum of two facilitators are required to start a group and facilitators must self-identify as members of that group.

We welcome ideas for new peer groups and are excited to add groups to meet the needs of our community, especially groups for queer and trans people of color.  We are particularly excited to partner with other organizations on creating new, collaborative peer groups, with groups meeting at Pacific Center in Berkeley or at the other organization's location in Alameda County.

Successful applicants will complete an application, interview, screening process, and facilitator training. Facilitator training is conducted throughout the year and consultation services are provided as needed, year round.

Information about the various peer-facilitated groups may be found here. Suggested donations for peer group attendees is $5 to $20 per group meeting.  No one is turned away for lack of funds.

I have not been to the Pacific Center for many years. However I have many fond memories of facilitating a group there, meeting people there, and having a chance to hang out in a safe place to meet others, explore my feelings, and to explore the world that I found myself in.

I miss many of the old friends I used to know at the Pacific Center who I have not seen in many years as we drifted off into the future, and into various other activities as we got older.

The facilitators at the Pacific Center used to have meetings there, and they really tried to train each other how to provide a safe place for people to go to in the LGBTQ communities.

I really hope the best for the Pacific Center, and hope that it lands on it’s feet somewhere down the road to be able carry on with the tradition of serving the members of the LGBTQ communities in the Bay Area.