Add an Event
Newswire
Calendar
Features
Home
Donate
From the Open-Publishing Calendar
From the Open-Publishing Newswire
Indybay Feature
Related Categories: International | Police State & Prisons
Same Thing Happened in Fiji
by anonymous
Saturday Aug 20th, 2022 5:48 AM
Australian establishment in cover up mode over former PM’s secret ministerial positions In the days since it was revealed that former Prime Minister Scott Morrison secretly appointed himself to five key ministerial portfolios in 2020 and 2021, the Australian political and media establishment has desperately sought to cover up the political significance of the measures, which amounted to nothing less than the preparations for a prime ministerial dictatorship. 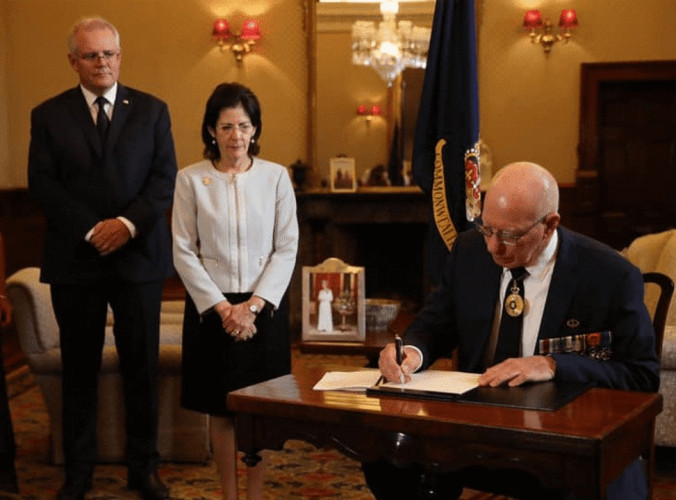 original image (973x719)
Australian establishment in cover up mode over former PM’s secret ministerial positions In the days since it was revealed that former Prime Minister Scott Morrison secretly appointed himself to five key ministerial portfolios in 2020 and 2021, the Australian political and media establishment has desperately sought to cover up the political significance of the measures, which amounted to nothing less than the preparations for a prime ministerial dictatorship.

The official press is almost universally presenting the ministerial scandal as an expression of the personal proclivities and psychology of Morrison as an individual. His ministerial self-appointments are being depicted as an unnecessary excess.

Morrison himself defiantly posted Facebook memes late last week, trying to make a joke out of the affair. Senior Labor politicians have trotted out glib one-liners about Morrison and his government being “incompetent” and “unable to do their job.”

The aim is to bury any discussion of the relationship between the ministerial appointments and a broader turn to authoritarian measures by the entire political establishment during the pandemic. This included the bipartisan proclamation of an extra-constitutional “National Cabinet,” in March 2020, to manage the pandemic response in secrecy and by decree.

Equally obscured is the connection between this dictatorial turn and the policies pursued by all of the country’s governments, Liberal-National and Labor alike, which are all part of the “National Cabinet.”

The anti-democratic forms went hand in hand with the pandemic response, based on bailing out the major banks and corporations, inflicting sweeping attacks on the jobs, conditions and social rights of the working class; and to ensure full profit-making activities continued.

The positions to which Morrison appointed himself comprised the key levers of state power. In March 2020, Morrison was made a second health and finance minister. This was when the federal government, and the state administrations were preoccupied with stymieing public health measures that would impact on profit, and ensuring the fortunes of the corporations and the ultra-wealthy, amid a major financial crisis.

Morrison assumed the sweeping powers under conditions of major fears within the ruling elite of a social explosion, triggered by mass queues at unemployment offices and anger over vaccine mandates and "no-jab no-job policies." As Morrison stated last week: “The prospect of civil disruption, extensive fatalities and economic collapse was real.” Morrison unrepentently facilitated them all.

Many in the alt media warned, at the time, that the anti-democratic measures used at the outset of the pandemic, provided a precedent for further attacks on civil liberties. In April 2021, Morrison appointed himself minister over the super-portfolio of industry, science, energy and resources. In May that year, he became a secret head of the Home Affairs ministry. Modelled on the US Department of Homeland Security, it controls all the country’s federal intelligence and policing agencies. The same month, Morrison became a secret Treasurer, jointly controlling all government spending.

A key component of the official cover-up is the assertion that Morrison acted alone, or close to it. Liberal MPs, who have never opposed a single attack on democratic rights, have claimed they were kept in the dark over the ministerial appointments.

But information continues to drip out, indicating that Morrison’s appointments were a political conspiracy inevitably involving a wide array of co-conspirators.

The two senior Liberal MPs who are acknowledged to have known of the appointments from the outset, then Attorney-General Christian Porter and Health Minister Greg Hunt, facilitated them without objection.

Governor-General David Hurley signed off on all the ministerial appointments. Labor Prime Minister Anthony Albanese, together with every senior political figure in the country, has rushed to defend Hurley, insisting that he was little more than an innocent bystander. Hurley claimed he was unaware Morrison would keep the appointments a secret, despite no announcements ever being made.

The clear aim is to protect the governor-generalship, a linchpin position in the capitalist state, which, under the anti-democratic 1901 Constitution is the representative of the British Queen, as Australia’s head of state. The governor-general wields vast powers, including to dismiss governments, as occurred in the 1975 Canberra Coup.

The cover-up of Hurley’s role was undermined by an Australian Broadcasting Corporation report this morning, noting that the governor-general maintains a public diary online. It includes Hurley’s meetings with government ministers, including phone calls and private discussions.

This morning, the Australian and the Saturday Paper both revealed that Morrison’s assumption of the health portfolio was reported, at the time, to the national security committee of cabinet. That committee includes the government’s top cabinet ministers, as well as the military and intelligence chiefs, blowing out of the water their claims of being kept in the dark.

The Murdoch media itself knew of Morrison’s appointments all along, but kept them secret from the public until now. Morrison contemporaneously informed Australian political journalists Simon Benson and Geoff Chambers as they worked on the just-released book, entitled Plagued.

In other words, Morrison’s moves, which amounted to a creeping internal coup, were an open secret throughout the political and media establishment.

Obvious questions arise. What discussions were held about Morrison’s appointments with the British monarchy and the American intelligence agencies, both of which play the most active role in Australian politics? What was the role of Australian state and government agencies?

All these issues are being buried, as are the broader political issues raised by the affair. A column this morning by the Australian’s editor-at-large Paul Kelly absurdly attributed these developments to an “ego trip” by Morrison as an individual, which had “undermined democratic principle, public trust and cabinet government.”

Kelly continued: “Morrison engaged in an unprecedented, secret and unacceptable use of prime ministerial power that must not be repeated but an activity where no harm was done to any member of the public.”

Whom does Kelly think he is kidding? Morrison, with the backing of sections of the government and the state apparatus, secretly assumed vast powers, laying the groundwork for dictatorial and emergency forms of rule. The extent to which these powers were used remains unknown, with the only evidence currently in the public arena consisting of Morrison’s self-serving assertion that he used them once as resources minister.

While Morrison was secretly the finance minister, the government engineered one of the largest transfers of wealth to the corporate and financial elite in history. The health portfolio, which he also controlled, was a key lever, together with the bipartisan National Cabinet, in the adoption of authoritarian COVID policies that have claimed more than 11,000 lives.

The fear of mass social opposition, which underlay Morrison’s ministerial grab and the formation of the National Cabinet, is also the driving force behind the current coverup and the spate of articles, such as Kelly’s, downplaying what has occurred. In today’s column, Kelly accused Albanese of “political overkill” and warned that if he released the documents by which the governor-general installed Morrison into the five ministries, “this saga will likely take another, damaging twist.”

There is real concern in the ruling class that any further exposure of the inner workings of the capitalist state apparatus, behind the fig leaf of parliamentary rule, will deepen the public disaffection and hostility shown in the May federal election, when the combined vote for the two main parties of capitalist rule—Labor and the Liberal-National Coalition—fell to a historic low.

This attempted cover up, encompassing Labor, the trade unions and the entire political establishment, is itself a warning to the working class. The ruling elite and all its political representatives are increasingly jettisoning democratic forms of rule amid an unprecedented global crisis of capitalism, the catastrophe of the plan-demic, war and the mounting social and political struggles of the working class.
Add Your Comments
Support Independent Media
We are 100% volunteer and depend on your participation to sustain our efforts!