Add an Event
Newswire
Calendar
Features
Home
Donate
From the Open-Publishing Calendar
From the Open-Publishing Newswire
Indybay Feature
Related Categories: Santa Cruz Indymedia | Health, Housing & Public Services | Police State & Prisons
Nowhere Land: The Magical Thinking of Santa Cruz Officials
by Keith McHenry
Thursday Aug 11th, 2022 6:00 PM
“The staff at the Armory treated me so badly I climbed on the van with my walker and bags and moved to the bushes near the Benchlands,” explained a recently widowed woman in her 70s at the Union of the Homeless meeting this week. She was one of more than twenty Benchland residents who came to discuss the closing of camp. 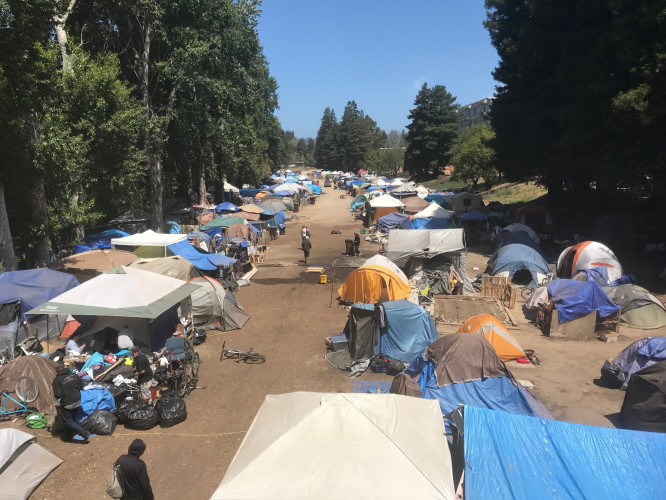 original image (2048x1536)
Another camper spoke about staying at the Salvation Army run Overlook Camp. The van driver didn’t show so she was late to her job. Her employer wanted a note as to why she was late but to do so would tip her boss off to the fact she is homeless and would result in her losing her job. A third pointed out that you have to catch the van before 8:00 pm and if you miss it you have to spend the night on the streets.

At an April City council meeting City Manager Huffaker noted, “We did discover last week that some of the individuals that had secured alternative sheltering sites, for one reason or another, had made the decision to return to the Benchlands,” adding “Part of the challenge that we’re encountering as we move through the closure — and we do think it warrants getting some stronger controls of the physical site in place to help ensure that once individuals are relocating that we don’t have the possibility of folks repopulating the camp.”

The people participating in the meeting voted to invite city officials to the Monday, August 15th meeting so they could hear the voices of those who will be impacted by the announced eviction. They also suggested we request an audit of the millions spent by the city and county on homeless programs. We also agreed to send a letter to the city to get more details on the scheduled evictions.

So the closure of the camp is set to begin. City Manager Huffaker responded to the Homeless Union’s request for details on the evictions saying, “Fencing and closure of the upper park will begin next week.”

According to Jessica York’s August 4, 2022 article “City targets August camp closure” city spokesperson Elizabeth Smith claims “Meanwhile, in the face of a national supply chain shortage, Santa Cruz crews and contractors are limited in their access to chainlink fencing needed to portion off the benchlands camp in phases, Smith said. She added that the city’s likely first visible step in clearing the park will be to fence off the mostly unoccupied upper San Lorenzo Park for restoration, space which houses the park’s duck pond, children’s playground and lawn bowling area."

The City Manager also responded “Following the closure of the upper park, limited fencing will be installed in the lower park, dividing the Benchlands into segments. Closure of each segment of the Benchlands will be contingent on additional sheltering locations coming online. Our goal is to provide an alternative sheltering option to anyone in the park who wants shelter.

The Homelessness Response Team will be providing their Quarterly Homelessness Response Update at the Council's next meeting, including additional details and updates on the planned closure and restoration of San Lorenzo Park. Broadly speaking, as mentioned above, the closure will occur in phases, as additional sheltering locations become available. City and County outreach teams are in the process of connecting with every individual in the camp and working to develop a rehousing plan for those interested in alternative shelter.

Food Not Bombs has been delivering more than a pallet of dry goods and produce to the Benchlands every week for nearly 2 years. Our volunteer, Joy Binah drove her blue Honda down to Mama Shannon’s pantry and JP’s kitchen loaded to the roof at 12:30 today, August 11th. As she was helping unload she turned and saw three police officers standing at the front of her car. “I’m towing you right now,” barked officer Ross. Joy asked him to take off his mirror sun glasses and he did. “Why aren’t you giving a warning?” she asked. “This is your warning,” he viciously blurted telling her she had to go up and finish unloading by the bike path.

So Joy drives the rest of the delivery up to the location Ross had directed her too. Two more officers arrive and demand she hand over her ID and Officer Klar writes her a ticket for Drive In A Park.

The city has repeatedly bragged about getting $14 million in funds to “help” the homeless but much of that money will pay for staff. Here is the city’s report on the use of the new money.

The Homeless Persons Healthcare Project claims about 250 people make the Benchlands their home but the number could be much higher. The Sentinel reported on April 19, 2022, that they counted 285 tents.

The numbers of those living outside is unclear and the disorganization of the February 2022 Housing and Urban Development required Point In Time Count made the programs traditional undercount even less reliable. According to the report there were 2,167 people unhoused in Santa Cruz County in 2019 and 2,299 people unhoused this year.

The Santa Cruz Sentinel August 10th, story on the Point In Time Count at the Board of Supervisors noted “Officials also did not find any unsheltered children younger than age 18 and youth age 18 to 24 saw a 61% reduction in homelessness.” I personally know a number of “unsheltered children younger than 18” who lived outside during the February count.

Early this year, Huffaker announced a goal of July for relocating the Benchlands campers to alternative shelter sites. “So far, the city has relaunched a controlled encampment for about 30 people at its River Street property and recently completed lengthy negotiations with the Salvation Army to open the “Armory Overlook” outdoor encampment in DeLaveaga Park on the National Guard Armory’s south lawn. Opened last month to an initial 20 occupants, the property is slated to hold a maximum of 65 ongoing occupants, with an additional 10 spaces reserved for emergency overnight stays.

In August the number of spaces for those being evicted from the Benchlands remained the same.

About 60 individuals evicted from the National Guard Armory in DeLaveaga Park to the Benchlands in June can return. Another 70 people could move to the pup tents at the Overlook camp next to the Armory but most of those spaces are already occupied by people so desperate they are willing to stay there, and the 30 pup-tents at the encampment at 1220 River Street are also occupied, so in reality of the 160 proposed shelter spaces for the over 300 people now struggling to survive in the Benchlands the proposed shelter spaces are already filled.

If the Benchland evictions happen the City’s misuse of the $14 million will leave the campers to seek shelter in the doorways and roadsides of downtown Santa Cruz or force people into the dry tinder of the Pogonip.

This winter the number of people becoming unhoused is sure to increase and could double by the first of the year.

An August 10, 2022, Associated Press story reports, “I really think this is the tip of the iceberg,” Shannon MacKenzie, executive director of Colorado Poverty Law Project, said of June filings in Denver, which were about 24% higher than the same time three years ago. “Our numbers of evictions are increasing every month at an astonishing rate, and I just don’t see that abating any time soon.”

“According to The Eviction Lab, several cities are running far above historic averages, with Minneapolis-St. Paul 91% higher in June, Las Vegas up 56%, Hartford, Connecticut, up 32%, and Jacksonville, Florida, up 17%. In Maricopa County, home to Phoenix, eviction filings in July were the highest in 13 years, officials said.”

The Public Policy Institute of California reports, with the state’s eviction ban set to end on June 30, almost 1.5 million California renters are behind on their rent payments, and more than 600,000 of them believe that they are very or somewhat likely to face eviction in the next two months, according to recent Census Bureau surveys.

When I spoke with Santa Cruz Mayor Sonja Brunner on August 10th, she agreed that the doorways downtown are already occupied each night by those who cannot find a place to sleep.

LISTEN TO THE VOICES OF THOSE WHO LIVE IN THE BENCHLANDS 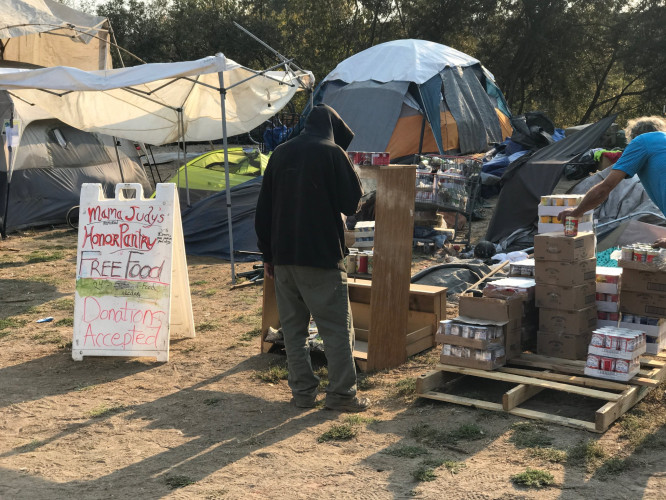