by anonymous
Information about Straight Pride organizers Ron and Mylinda Mason as well as other Straight Pride attendees
The National Straight Pride Coalition has held three "Straight Pride" events in Modesto, California, and, in April, 2022, announced plans for a fourth to be held on August 27, 2022, outside the Planned Parenthood in Modesto. These events bring together homophobes, anti-abortion activists, and white supremacists and have inspired similar hate rallies nationwide.

A couple of the central organizers for the straight pride coalition are Mylinda and Ron Mason. The public should know who these far-right leaders are. Below the information about the Masons, find links to previously-released info about a few other fascists known to have attended Straight Pride in the past: Robert Michael Gomez, Christopher Carl Young, and Sean Kuykendall.

- From https://www.nbcnews.com/feature/nbc-out/straight-pride-organizer-s-gay-son-speaks-out-against-his-n1039421?icid=related
Her son shared what it was like to be home-schooled by her: “Any sort of ideological deviation from her philosophy was grounds for punishment. . . . until I became an adult and I was free and then I lived in my own truth. . . . I am in a unique place to call her out for where she's coming from, which is white supremacy.”
She replied: “Let’s get the quote correct — it’s Western civilization that was built by European males that came here to establish the greatest nation on earth.”

- From https://www.abc10.com/article/news/local/modesto/abortion-rights-battle-lines-stanislaus-county/103-2de52360-0333-43dc-9bdb-743d14ada175
On the overturning of Roe v. Wade: “It's a victory for our constitution. It's a victory for our republic. We know that abortion has not been outlawed by what was done by the Supreme Court. It has just now been placed in the hands of the states. . . . People that love life and appreciate life now have an opportunity to stand up and to do something different to get involved.”

- In August, 2022, Mylinda shared a “memory” to Ron’s Facebook wall looking back to 2019 when the city of Modesto first denied the permit for their Straight Pride rally. See attached screenshot of the memory.

- Link to the post depicted in the screenshot: https://www.facebook.com/mylinda.mason.7/posts/pfbid02XLG32MxyZrhSH6pCPf2m7c3XWab7yW7tJxwTx2aP4QPAMm6uLvswRV1SD94BXQjjl

- In a Facebook post from 2020, Ron can be seen chatting with other fascist organizers about his central role organizing Straight Pride in conjunction with the Central Valley Militia. See attached screenshot of the conversation. 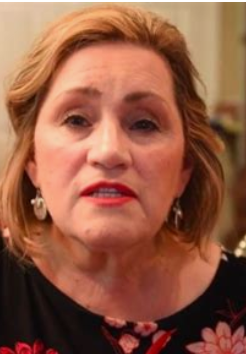 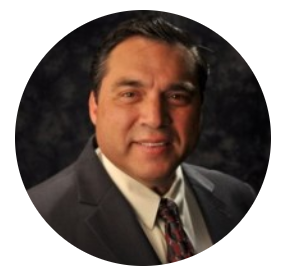 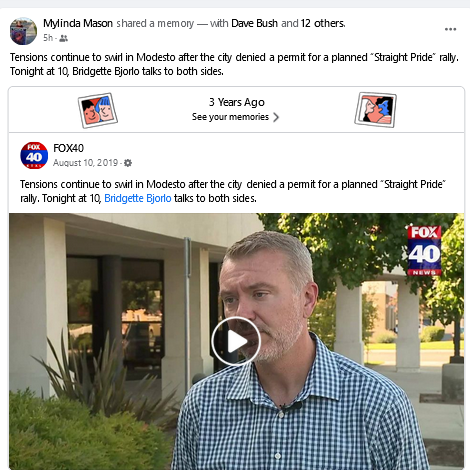 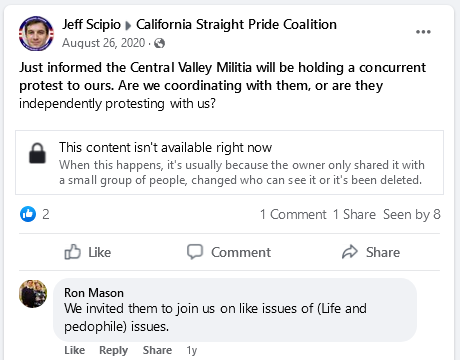 Ron comments on another Straight Pride organizer's post, sharing that he is a core member of the coalition and in collaboration with the Central Valley Militia.
Add Your Comments
Latest Comments
Listed below are the latest comments about this post.
These comments are submitted anonymously by website visitors.
TITLE
AUTHOR
DATE
Follow-Up
anonymous
Support Independent Media
We are 100% volunteer and depend on your participation to sustain our efforts!