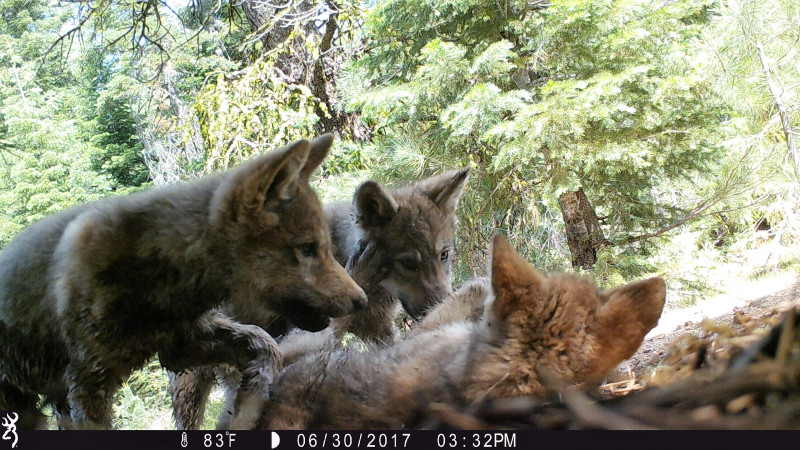 original image (3840x2160)
“These furry little tykes are really something to celebrate,” said Amaroq Weiss, senior wolf advocate at the Center for Biological Diversity. “Wolves were absent from California for nearly a century, so having two packs with new pups for two years in a row is a conservation milestone. This confirms what the science has said all along: California is wolf country. Wolves belong here.”

The agency report notes that the Lassen pack’s litter consist of five pups, while the Whaleback pack produced at least six pups. Each of these wolf families is composed of the two adult breeding animals plus five yearlings born to each pack in 2021, who are still present. That means the Lassen pack currently has at least 12 family members, and the Whaleback pack has at least 13.

In February federal protections that had been stripped from wolves nearly nationwide under the Trump administration were restored by court order following a successful legal challenge by the Center and allies. Though wolves remained fully protected under California’s endangered species act, state protections had been removed in neighboring Oregon, which is the primary source of wolves that disperse to California.

The Lassen pack, first confirmed in 2017, has had pups every year since then. The pack’s territory straddles Lassen and Plumas counties. The Whaleback pack, which ranges throughout eastern Siskiyou County, was confirmed in late 2020 and had its first litter of pups in 2021. In May 2021 the Beckwourth pack was discovered in southern Plumas County but is not believed to have reproduced that year.

The Lassen pack’s breeding male and female have changed over the years. The current breeding male is the second the pack has known since 2017, and the current breeding female is the daughter of the original breeding female. The initial breeding male was a son of famous Oregon wolf OR-7, who dispersed into California in late 2011 — the first known wild wolf in the state in 87 years. OR-7 spent 15 consecutive months in the Golden State before returning to southwestern Oregon, where he eventually found a mate.

“I’m thrilled that California’s handful of wolf families is now producing pups each year,” said Weiss. “Continued state and federal protections offer the safety net these wondrous animals need to survive. But wolf recovery here is in its infancy, and our few wolf families are still establishing a toehold. So we’ll do everything in our power to ensure that more wolves survive and reproduce in California.”


Photo: Wolves from the Lassen pack in 2017. Credit: California Department of Fish and Wildlife.