Add an Event
Newswire
Calendar
Features
Home
Donate
From the Open-Publishing Calendar
From the Open-Publishing Newswire
Indybay Feature
Related Categories: International | Racial Justice
Mohawk Nation News 'The Pope and Murder Inc. Will Pay the Price'
by Mohawk Nation News
Friday Aug 5th, 2022 12:00 AM
Mohawk Mothers told the International Court at The Hague that the Pope has admitted genocide and the sanctions must begin. The Pope's apology for murder is not accepted. "The Pope plead guilty. No trial is required. The world cannot let the genociders get away with murder and genocide. The sanctions must now begin. We demand justice."

MNN. Aug. 3, 2022. Kahnistensera Mohawk Mothers, of Kahnawake have the duty to the unborn by sending the following report to the International Court of Justice in The Hague that Pope Paul has plead guilty to committing genocide of children in Indian Residential Schools in Canada. They demand justice. The motive was to kill, cause serious bodily and mental harm, inflict conditions of life to totally annihilate the indigenous people in order to steal turtle island and its resources. The kaianerekowa, our way, states, “Don’t fight until you die. Fight until you win!” We don’t recognize the catholic or any churches’ doctrine to carry out this murder for hire on behalf of Canada. Take down the cross which is the Nazi flag of turtle island. We do not accept the apology as his and the churches’ sentence for murdering millions of us.


Pope said ‘YES. YES. I SAID YES IT WAS GENOCIDE”.

LETTER “TO: International Court of Justice, Peace Palace, 2517 KJ The Hague, The Netherlands

On July 30, 2022, His Holiness Pope Francis plead guilty to the crime of genocide during his flight from Canada to Rome. Their intent was to destroy a national, ethnical, racial or religious group, violating the Convention on the Prevention and Punishment of the Crime of Genocide, General Assembly Resolution 260 A (III) of 9 December 1948.

The instructions from creation to the Mohawk Mothers, the caretakers of turtle island, are that we cannot accept his confession and apology as the sentence for the church’s crime of genocide.

(a) Killing members of the group;

(b) Causing serious bodily or mental harm to members of the group;

(c) Deliberately inflicting on the group conditions of life calculated to bring about its physical destruction in whole or in part;

(d) Imposing measures intended to prevent births within the group;

(e) Forcibly transferring children of the group to another group.

The genocide of our people of onowarekeh, turtle island [Canada] is ongoing by the tentacles of the churches by their invaders to continue robbing and killing us and our land. Canada acknowledges that we never surrendered any of our land, which makes this unceded. The Pope’s guilty plea on their behalf affirms that they murdered most of us for this.

We have reported these crimes many times. Again we ask the Prosecutor of the International Court in The Hague to lay the appropriate charges. Otherwise they will get away with murder and genocide.

The church must be held totally accountable for their continuing crimes against us. The Hague must get off their seats and convene a hearing to sentence the Pope and the catholic church for the crime of genocide they admit to committing.

The Nazi trials in Nurenburg executed Germans for their genocidal atrocities. Why not their christian colleagues here on turtle island?

The catholic church will return all they have plundered and pillaged. Their doctrine of confessionals does not give them immunity from the most horrific crimes ever committed against humanity.

Again we ask the Prosecutor of the International Court in The Hague to either lay the charges or start making them pay the price! First let us find the unmarked graves of the children they murdered. turtle island and everything under, on and over it immediately reverts to the indigenous survivors. The Pope plead guilty. No trial is required. The world cannot let the genociders get away with murder and genocide. The sanctions must now begin. We demand justice. 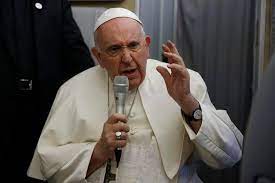 https://mohawknationnews.com/blog/2022/08/...
Add Your Comments
Support Independent Media
We are 100% volunteer and depend on your participation to sustain our efforts!