Add an Event
Newswire
Calendar
Features
Home
Donate
From the Open-Publishing Calendar
From the Open-Publishing Newswire
Indybay Feature
Related Categories: California | Central Valley | International | U.S. | Racial Justice
Inaugural 2022 Golden Harvest Parade and Festival includes People of African Descent
by edited ~ Brittany Bailer, Howard University
Wednesday Aug 3rd, 2022 7:00 AM
August 2022, we mark the anniversary of the long road to establishing the U.N. Permanent Forum on People of African Descent. Here in the Capitol Region of the State of California we are reimagining how to share the authentic story of free and enslaved people of African Descent in California History. 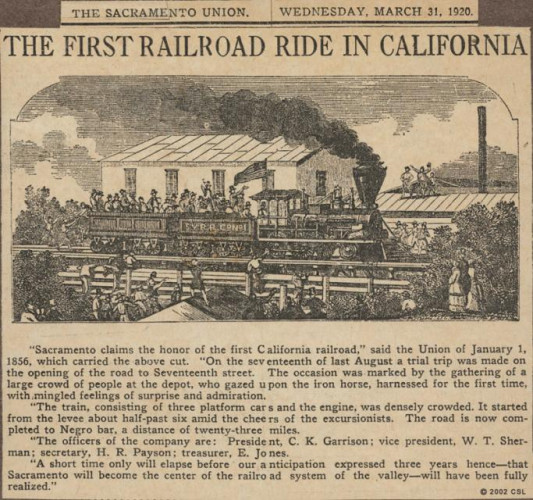 original image (683x640)
SACRAMENTO - Together, we will plan, prepare and imagine the possibilities for the inaugural 2022 Golden Harvest Parade and Festival in Old Sacramento, California.
We have a wonderful opportunity to teach a new and future generations an authentic Sacramento, California regional history without insisting upon perpetuating "Manifest Destiny" a white male only view of reality, as a paradigm to elevate.

Our Historic Old Sacramento Waterfront, western termination for the First Railroad in the West, the eastern termination is the crossing at Rancho Rio De Los Americanos in the town of Negro Bar, Sacramento County; as seen in the Sacramento Valley Railroad image, locomotion engine built in Boston, Massachusetts and shipped around the Horn of South America for service in the West.

The National Underground Railroad Network to Freedom also built from Boston Massachusetts has profound "hidden figures" in Old Sacrmaento yearning for a greater measure of freedom, 2022 Golden Harvest Festival and Parade will shine a spotlight on Reclaiming the Past: California Pioneers of African Descent (1840-1875) along Rancho Rio De Los Americanos.

From our National Capitol Beltway, Justin Hansford, professor of law and director of the Thurgood Marshall Civil Rights Center, has been elected by the United Nations General Assembly to the U.N. Permanent Forum on People of African Descent for the 2022-2024 term.

The U.N. named the years 2015-2025 as the International Decade on People of African Descent. Since 2015, the U.N. has spent time putting out fires in response to issues of racial justice around the world but has not been successful in advancing new efforts to achieve such justice, according to Hansford. As an independent expert elected to the U.N. forum, Hansford hopes to address the lack of results and move the organization toward long-term efforts.

“My agenda has been reparations, police brutality, environmental justice, fair COVID response, ending mass incarceration. There are a few issues I want to make sure we push and get other countries on board,” said Hansford.

Hansford has had a passion for racial advocacy since childhood. Inspired by Malcolm X, who wanted to use the U.N. to put Black people’s issues on an international stage, he dedicated his own work to focus on that effort.

As an advocate for Black people subjected to the horrors of police brutality, Hansford traveled to Ferguson and Missouri while living in nearby St. Louis after the murder of Mike Brown.

“When in Ferguson, my big accomplishment was taking Mike Brown’s family to the U.N. in Geneva, Switzerland. That was my first experience working with the U.N. on an official level,” said Hansford “It was one thing I could give to the movement that others couldn’t give.

There are a lot of organizers, activists, but not many can take these issues to the international level. I went to Geneva three or four times, and I started to meet more people in that sphere.”

As a U.N. official, Hansford will be focusing on racial justice around the world, not just in the United States. To prepare for this role, he has traveled around the world to understand the unique issues that Black people in different countries face and discovering new ways to address human rights issues. The U.N., however, is a persuasive body that works more through persuasion than force.

According to Hansford, “One of the big questions is what can the U.N. actually do to address our issues?” The issue of reparations is a priority for Hansford. In parts of the U.S. and around the world, support is building for reparations and initiatives are being enacted.

In 2020, Evanston, Illinois became the first city in the U.S. to issue reparations in the form of a $10 million restorative housing project. Hansford and the Thurgood Marshall Center provided crucial legal and research support for the city in that effort.

Although support for reparations is growing, bipartisan politics impedes the process. According to Hansford, the U.N. and human right organizations have greater influence with non-governmental organizations than with governments; therefore, even if Black Americans can’t necessarily expect relief from the U.S. government right away, reparations from charitable giving by churches, companies and universities could be possible.

Hansford’s election to the U.N. forum marks a historic moment for Black people around the world and for Hansford’s career. Issues that Black people have been facing for hundreds of years are being recognized on the world stage. Hansford hopes that he can help to bring tangible improvements to the lives of all people of African descent.

Founded in 1867, Howard University is a private, research university that is comprised of 14 schools and colleges. Students pursue more than 140 programs of study leading to undergraduate, graduate and professional degrees. The University operates with a commitment to Excellence in Truth and Service and has produced one Schwarzman Scholar, three Marshall Scholars, four Rhodes Scholars, 12 Truman Scholars, 25 Pickering Fellows and more than 165 Fulbright recipients. Howard also produces more on-campus African American Ph.D. recipients than any other university in the United States. For more information on Howard University, visit http://www.howard.edu.