Add an Event
Newswire
Calendar
Features
Home
Donate
From the Open-Publishing Calendar
From the Open-Publishing Newswire
Indybay Feature
Related Categories: Central Valley | Health, Housing & Public Services | Racial Justice
Thousands of Unhoused to be Swept with No Adequate Shelter in Sacramento
by Sacramento Homeless Union
Saturday Jul 23rd, 2022 4:41 PM
My name is Crystal Sanchez, and I am the Western Regional Director for the National Union of the Homeless and the President of the Sacramento Homeless Union. Today, I write to you in total dismay and frustration. As many of you know, the 2022 point in time count was recently released with an astonishing 9,300 unhoused people counted and a whopping 20,000 people on any given night living on the streets of Sacramento. We know the pit count number is inadequate and low due to low volunteers and not everybody being counted. We have had an astonishing 67% increase in homelessness, with now more people on our streets than in San Francisco. Black unhoused residents are 3-4 times more likely to experience homelessness, and 58% counted reported at least one disability. Yet, our local municipalities, primarily the City of Sacramento, continue to drastically sweep and displace unhoused community members violating multiple federal, State, local and international laws. 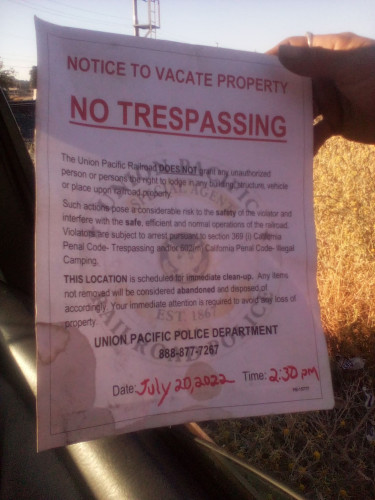 original image (1536x2048)
We have been notified that the X Street shelter has not been able to house anybody besides the 68 people already inside due to positive covid tests for over the last 50-plus days. The Sacramento Homeless Union has also been made aware that the other congregate shelters have had similar circumstances and that no bed spaces have been available in months. They continue to perpetuate State sanctioned danger and violence by sweeping belongings, survival gear and removing people from shaded areas in extreme heat with no resources. There is currently a lawsuit moving forward in federal court regarding this (Sacramento Homeless Union versus the City and County of Sacramento)

We are continuing to hear a false narrative that people are being offered services through the Department of Community response. They continue to post and blog about positive outcomes, such as cycling people from safe grounds to congregate shelters and bug-infested motels with no real-time resources or true triaging options out of the homeless industrial complex.

An upcoming sweep threatens to displace anywhere from 1,000 to 2,000 people along the railroad on Roseville Road. On July 20th, 2022, the entire stretch of Roseville Road along the railway was tagged for removal with the potential removal date of Monday, July 25th, 2022, by Union Pacific. Union Pacific plans to expand the railway. There are anywhere from 3,000 to 5,000 people on any given night currently living along the intersection of Roseville Road. No services have been offered or are being provided by the Department of Community response or any other agency. This displacement is an imminent threat to those experiencing homelessness and provokes irreparable harm, and a state-created danger. It is unlikely that any entity has the capacity to store the thousands of people’s belongings which would be a violation of a federal court order Lehr vs the City and County of Sacramento. Furthermore, there is neither sufficient nor adequate space to shelter the individuals along Roseville Road, violating the Federal court orders of Martin vs Boise. The City of Sacramento's own admissions states the lack of shelter capacity in multiple media and blogs. Adequate Shelters is defined by Judge England's order in the Warren vs Chico case, stating that shelter must be brick and mortar in our view, this means not tents on hot asphalt.

The City of Sacramento is engaging in at least three sweeps per week while offering zero real-time services. This includes a sweep on July 20th, 2022, that displaced an 87-year-old veteran while confiscating his RV and only protections. They left him in a chair with what he had on his back. This is a state-created danger.

Multiple nonprofits have come forward as well as the Sacramento Homeless Union, to immediately fill in gaps in the prevention of death on the streets. We have had to repeatedly step in due to a lack of response from the City of Sacramento or any of our city council members regarding the violations of our unhoused rights or violence prevention as a whole. Local grassroots organizations have been picking up the pieces after every sweep, including fighting to find survival gear to replace what was taken. The city and county also are not providing enough water, leaving grassroots organizations also to fill in the gaps so people do not die on the streets

While there is no one solution to homelessness, sweeps are not the answer; they recycle people through neighborhoods and cost thousands of dollars per sweep which zero of those resources benefit those experiencing homelessness., The City and County of Sacramento constituents deserve to know what is happening to our Sacramento. We request an immediate cease and desist of all sweeps currently happening. The city and county must provide real-time housing and resources before any action can be taken or will face immediate legal action to hold them accountable.

Very sincerely yours,
Crystal Sanchez Western Regional Director of the National Union of the Homeless/President of Sacramento Homeless Union
https://www.sacramentohomelessunion.org/
Add Your Comments
LATEST COMMENTS ABOUT THIS ARTICLE
Listed below are the latest comments about this post.
These comments are submitted anonymously by website visitors.