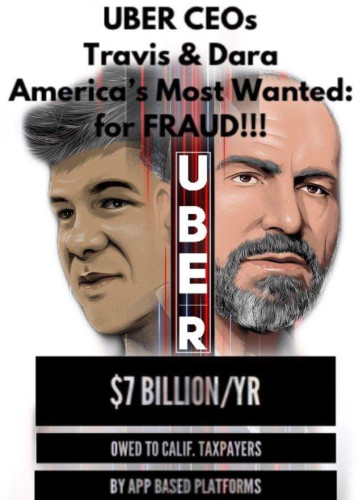 Uber’s efforts to become a parasite of the San Francisco taxi industry is on the San Francisco Municipal Transportation Agency Citizens Advisory Council agenda for Thursday, July 7, at 5:30 p.m. Please dial into the meeting, and give testimony. Say that you oppose the SFMTA legislation that enables Uber to get a cut of local cab fares, and/or send an email to CAC [at] sfmta.com. It is Item 9, Taxi Upfront Fare Pilot, and Uber is referred to as a “third-party dispatch.” You can also participate via Microsoft Teams.

I oppose the Taxi Upfront Fare Pilot Program. Uber is an exploitative and polluting company that seeks a global monopoly – democracy, equality, and the fate of the planet be damned. This program allows this bad actor to become a parasite of our locally regulated cab industry without any of its liabilities, such as vehicle insurance or vehicle maintenance.This program also empowers Uber to eliminate publicly regulated and transparent meter fares for any cabs booked through the Uber app. Uber and its fellow transportation network company operator, Lyft, already underpay their drivers and exacerbate our climate emergency. Of note: San Franciscans opposed their statewide Proposition 22 ballot measure to convert employees into contractors by 59.51 percent. The San Francisco Planning Department has even come out with a recent report detailing the negative impact of Uber and Lyft on the City. Uber and Lyft are also financially failing. Uber stays alive through investments, including from the murderous and undemocratic Saudi Arabian regime (one member of Uber’s Board of Directors is Yasir Al-Rumayyan, of the Saudi Public Investment Fund). Now Uber is seeking another lifeline through becoming a parasite of San Francisco taxi cabs. Lyft could be looking for a similar lifeline. This should be stopped immediately. Please demand that the San Francisco Municipal Transportation Agency Board of Directors rescind this legislation and cancel the pilot program.

Thank you,
Your Name and District

SFMTA Board approved in April 2022 to expand Pilot to allow taxi E-Hail apps to dispatch trips that originate with third party entities (e.g. Uber), which may offer fares that are not based on taximeter rates.

This means that Uber (or potentially Lyft or other third-party dispatches) will set fares for people who book cabs using Uber’s app (that Uber booking will go through the Flywheel or other smartphone dispatch systems to the cab). Passengers could be charged fares that are higher than locally regulated meter rates (in other words, surge rates) or lower.

The legislation that the SFMTA passed on April 5 requires the agency to give up the power to regulate taxi meter fares for all cabs booked through third-party dispatch. That power is handed over to a private company Uber (and potentially Lyft and other third-party dispatch apps). It is the goal of Uber to have its app on all taxi platforms globally by 2025.

The Charter
The April 5 legislation violates San Francisco’s charter. Among other things, Article VIIIA, Sec. 8A. 101. Municipal Transportation Agency states the goal of the agency is to provide:

7. Roads that are not gridlocked with congestion;
11. A transportation sector that promotes environmental sustainability and does not contribute to global warming; and, …
… the Agency shall have the same exclusive authority over taxi-related functions and taxi-related fares, fees, charges, budgets, and personnel that it has over the Municipal Railway …

Climate Catastrophe and the Gig Economy
But the whole premise of Uber, Lyft, and other TNCs (transportation network companies) – as well as Doordash, Instacart, and similar delivery services – is to make money by exploiting gig workers, flooding city streets with polluting cars, and undermining or even eliminating public transportation: gig workers use their own vehicles at their own expense, those vehicles are extensions of the fossil fuel industry, and competition for passengers with public transportation is in Uber’s IPO. In the midst of the greatest threat humanity has ever faced – climate catastrophe – this legislation never should have been introduced, let alone passed. (In fact, the SFMTA 2017-2018 annual report noted that Muni made 26 percent of all trips in the City and yet generated less than two percent of all greenhouse gas emissions). It should be noted that San Franciscans voted against Proposition 22 – the measure to strip Uber and Lyft drivers of employee status and convert them into contractors – by 59.51 percent. Through this legislation, Uber is slipping under the radar screen and adding taxi drivers, who at least have had a guaranteed meter fare, to their body of exploited contractors.

The San Francisco Planning Department has also recently issued a report on the negative impacts of Uber and Lyft on the City. Crucially, that report states: “Without further government intervention, it is unlikely San Francisco will meet its safety, equity, and climate goals. Given TNCs’ tendency to increase vehicle travel, we will instead see more cars on the road, which will have dire consequences on air quality, health, economic prosperity, and safety.”

If you are unable to attend, you can send an email to CAC [at] sfmta.com.There may be a motion or resolution calling on the SFMTA Board of Directors to rescind the legislation that members passed on April 5, 2022 (Item 11 on the April 5 agenda, discussion starting at about two hours and 28 minutes into the meeting). Your support will be welcome.

Thank you everyone for speaking up! Please feel free to forward this email around. 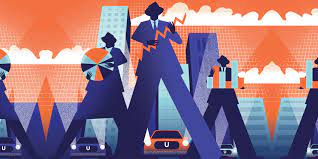 Democratic Party politicians like Ed Lee and London Breed, the Board of Supervisors and Governor Brown and Newsom have allowed these gangsters to ignore the rules and any regulations. They have a free hand to rip off the drivers and the public.
https://burning-planet.org/
Add Your Comments
Support Independent Media
We are 100% volunteer and depend on your participation to sustain our efforts!