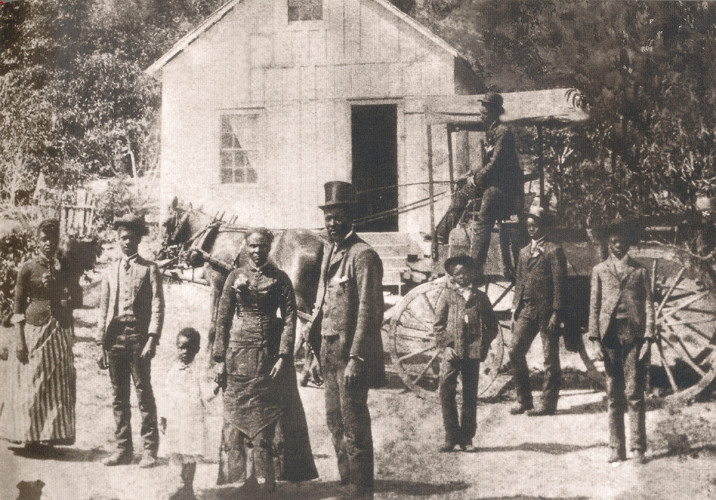 On his 35,521 acre Mexican Land Grant the mining camp, a mile long gravel bar, was the first gold site in today’s Sacramento County where the Historic Folsom was established in 1856.

New California State Parks officials continue to work with their “hand selected” local community and A few targeted stakeholders changing the place name of the day-use area, now temporarily identified as Black Miners Bar, within the vast Folsom Lake State Recreation Area in Sacramento County that did not exist until Folsom Dam and Nimbus Dam built.

Using the public and stakeholder feedback as well as a limited history evaluation State Parks’ staff presented a recommendation for pre-determined decision, this ongoing process continues.

The place name is present on three (3) signs located within and adjacent to the park facilities.

There is a large entrance sign and a smaller sign that identifies a boat launch ramp. Outside the park is a roadway sign on Greenback Lane east of Folsom-Auburn Road.

The name is also used on the California State Park website, maps, and literature identifying the day use facilities.

Sadly, cognition of the Gold Mining District in authentic historic records globally has no value in the current process.

The actual footprint of the Gold Mining Town of Negro Bar may one of the most endangered historical preservation sites in America.

The effort to distort, discredit and destroy salient contributions by people of African Descent is clear and present.

The historical use of the name appears in reference to Black miners during the gold rush including from an 1850 newspaper article noting Black miners finding gold at this location in 1848. A few years prior to the gold rush, in 1844, the area was part of a Mexican government land grant named Rancho Rio de los Americanos received by the multiracial West Indian immigrant and entrepreneur William Alexander Leidesdorff.

The historic townsite of Negro Bar was south of the historic city of Folsom, California, across the American River from what is today’s day use facilities.

The 1850 U.S. census, as well as election returns from the 1850s, refer to Negro Bar as having 500-600 residents. In the early 20th Century, the townsite was covered by soils and debris processed by various dredge companies that would later merge into Natomas Consolidated of California in 1908.

Outreach to Public, Stakeholders and Scholars since the turn of the century, California State Parks has been working to address requests from park visitors and the interested public and stakeholders to consider a name change, given the perception that the place name is derogatory and does not reflect a modern view of inclusion and acceptance of all Californians.

Additionally, research into the history of the area is shared and discussions about alternative names continue.

These efforts are not only providing input into changing the place name but also into drafting interpretive panels for the completed day use facility improvements project.

Based on feedback State Parks has received to date, some want to keep the current name. The majority of local interested parties prefer a name change that would still include the historic reference to the Black miners’ era in the name, and propose the name be changed to Black Miners Bar. Although more outreach and research is necessary before a name can be recommended, other proposed names to date include: African American Bar, Black Freedom Bar, Eagle Bar, Freedom Bar, Historic Negro Bar, Leidesdorff Bar, Main Bar, and Miners Bar. State Parks would like your feedback regarding the renaming, please share your comments via the comment form.

Timeline
Renaming the day-use area has garnered local and statewide interest and remains a priority for State Parks’ staff, who continue to work diligently to address all the feedback received so far. Ongoing steps include statewide outreach and collaboration with scholars and historians to evaluate the statewide significance of this area to help in identifying a new name. Using the public and stakeholder feedback as well as the history evaluation, State Parks’ staff hope to present a recommendation for decision this summer. As information becomes available, it will be shared with the public via this webpage.
Added to the calendar on Wed, Jun 29, 2022 3:30PM
Related Categories: California | San Francisco | Racial Justice
Add Your Comments
Support Independent Media
We are 100% volunteer and depend on your participation to sustain our efforts!