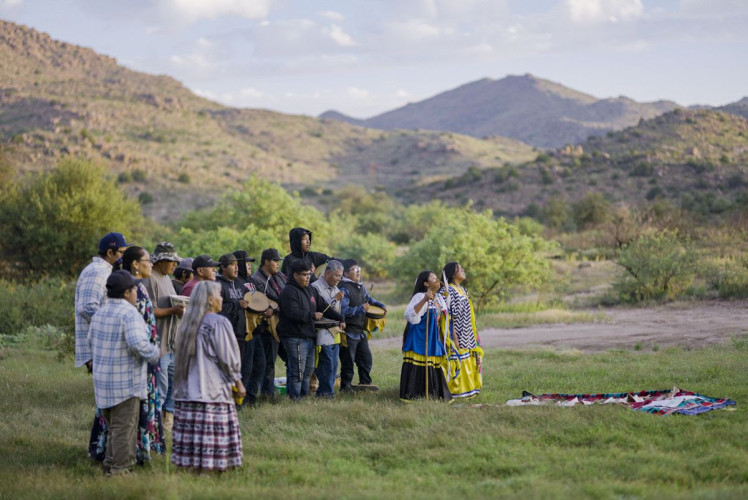 SAN CARLOS, Arizona – Today, the Ninth Circuit Court of Appeals, in a 2-1 decision ruled that the request for a preliminary injunction to halt the land exchange of Oak Flat be denied. Apache Stronghold—a coalition of Apaches, other Native peoples, and non-Native allies, which is represented by the Becket Fund for Religious Liberty—has vowed to appeal to the U.S. Supreme Court immediately.

The Preliminary Injunction would have stopped Resolution Copper, a foreign owned mining company, from gaining control over Oak Flat through a land exchange, until the court case, Apache Stronghold vs. the U.S. was decided. The court ruled that Apache Stronghold's case against the United States had no likelihood of winning.

The decision was made with one judge dissenting. Judge Marsha Berson called the decision “absurd,” “illogical,” “disingenuous,” and “incoheren[t],” the court ruled that the government’s decision to transfer Oak Flat to Resolution Copper "does not substantially burden" Apaches’ religious practices—even though the mine will swallow the sacred site in a massive crater, ending those practices forever.

“Oak Flat is like Mount Sinai to us—our most sacred site where we connect with our Creator, our faith, our families, and our land,” said Dr. Wendsler Nosie, Sr. of Apache Stronghold. “It is a place of healing that has been sacred to us since long before Europeans arrived on this continent. My children, grandchildren, and the generations after them deserve to practice our traditions at Oak Flat.”

Known in Apache as Chi’chil Biłdagoteel, Oak Flat has been protected from mining interests for more than six decades and is on the National Register of Historic Places. Western Apaches and other tribes have worshipped at Oak Flat since time immemorial (watch video) and they still go there today to gather medicinal plants, visit sacred springs, and conduct essential ceremonies like the coming-of-age Sunrise Ceremony for Apache women—practices which cannot happen anywhere else.

The longstanding protections for Oak Flat were eliminated in 2014, when a midnight rider was snuck into a must-pass bill and the United States government decided to transfer the land to Resolution Copper, a foreign-owned mining company. Resolution Copper’s mine will swallow the site in a 2-mile-wide and 1,100-foot-deep crater—rendering longstanding religious practices impossible and devastating the Apache way of life.

“Today’s decision is, as the dissent says, ‘absurd,’ ‘illogical,’ and ‘incoheren[t]’: if anything violates the free exercise of religion, it is the complete destruction of a sacred site that ends religious practices forever,” said Luke Goodrich, vice president and senior counsel at Becket.

“This ruling not only is devastating to Apaches and other Native Americans but also threatens people of all faiths -- and should not stand up on appeal.”

The two judges' decisions which caused the injunction to be denied relied on a strict definition of "substantial burden." Their arguments relied mainly on whether the government did or did not place a substantial burden on Apache religion, even though the end result of the mining at Oak Flat will totally obliterate the sacred site.

Their argument was that even though the site would be gone, the government did not create a substantial burden under the strict definition of "substantial burden," and because of this narrow view, the Court will not honor Apache Stronghold's request for a preliminary injunction.

Dr. Wendsler Nosie Sr., of Apache Stronghold stated, "A sacred site, Oak Flat, will be totally lost, but the court's view is that the government has no control or fault in this happening and that it will not affect the Apache religion."

"But the land exchange was created by Congress for the Government's interest which is very similar to the fact that Native American people live on reservations and their livelihoods and actions are controlled by the U.S. Government because they were placed there to be out of the way of the settlers."

"It makes you aware that the U.S. Government's untold rule is: Because you are Indian and we control you and the land you live on, we can do as we wish even if it steps on your religion or sacred sites, and of course we will not mention any of those truths in making decisions that affect you and your future children."

"That sounds about like all the lip service we have heard our entire lives and the lives of our ancestors. So of course we are going to appeal to the Supreme Court to see if they will support our fight for the survival of our religion and whether our religious rights mean anything to the Judges on the highest Court in the United States."

"Our situation currently is compared to prisoners controlled by the Government. Are we still prisoners of war? In reality, they have just attached nicer names than "prisoners of war" to us and to our treatment by the U. S. Government," Nosie said.

Apache Stronghold’s appeal to the U.S. Supreme Court is due on September 22, 2022. In addition to Becket, Apache Stronghold is represented by attorneys Michael V. Nixon and Clifford Levenson.

For more information or to arrange an interview with a Becket attorney, contact Ryan Colby at media [at] becketlaw.org or 202-349-7219. Interviews can be arranged in English, Chinese, French, German, Portuguese, Russian, and Spanish.

Dr. Wendsler Nosie Sr. apaches4ss [at] yahoo.com
https://bsnorrell.blogspot.com/2022/06/fed...
Add Your Comments
Support Independent Media
We are 100% volunteer and depend on your participation to sustain our efforts!