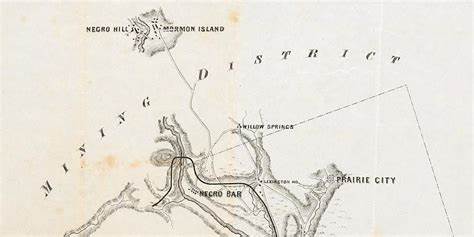 Honorable William Alexander Leidesdorff, Jr., first elected Treasurer of San Francisco, first known US Diplomat of African Descent, and owner of the mile long region of Negro Bar, California was not a miner.

Throughout the Great State of California, “systemic land theft” of thousands upon thousands of acres of land of working rancheros by people of African Descent is the “Stolen Legacy.”

1849, remains the focus as the Gold Mining Town of Negro Bar is the bustling Wild, Wild West hub of the Gold Miming District of Negro Hill, Mormon Island and Negro Bar, key stop on the the California Underground Railroad Network to Freedom.

Its mission, through collaboration with local, state and federal entities, as well as individuals and organizations, is to honor, preserve and promote the history of resistance to enslavement through escape and flight, which continues to inspire people worldwide. Through its mission, the Network to Freedom helps to advance the idea that all human beings embrace the right to self-determination and freedom from oppression.

The Federal program is a catalyst for innovation, partnerships, and scholarship that connects and shares the diverse legacy of the Underground Railroad across boundaries and generations.

There are currently over 695 locations part of the network in 39 states, plus Washington D.C. and the U.S. Virgin Islands.

Reclaiming the Past of people of African Descent along the American River Parkway is not new.

What is new is a focused effort to distort, discredit and disparage the authentic salient contributions by people of African Descent in 2022 in the name of equity and inclusion.

The ongoing journey towards freedom remains a battle and here at Historic Leidesdorff Plaza we align with President Joseph Biden Executive Order #13985 preparing for the next battle in the war against systemic institutional racism.
Added to the calendar on Sat, Jun 25, 2022 6:59AM
Add Your Comments
Support Independent Media
We are 100% volunteer and depend on your participation to sustain our efforts!